In the 'Graveyard of Empires', the US Military Presence Is on Life Support

As a private citizen, Donald Trump advocated for full US withdrawal. As president, he has chosen to perpetuate, prolong and expand the war, at the cost to more US treasure and lives. 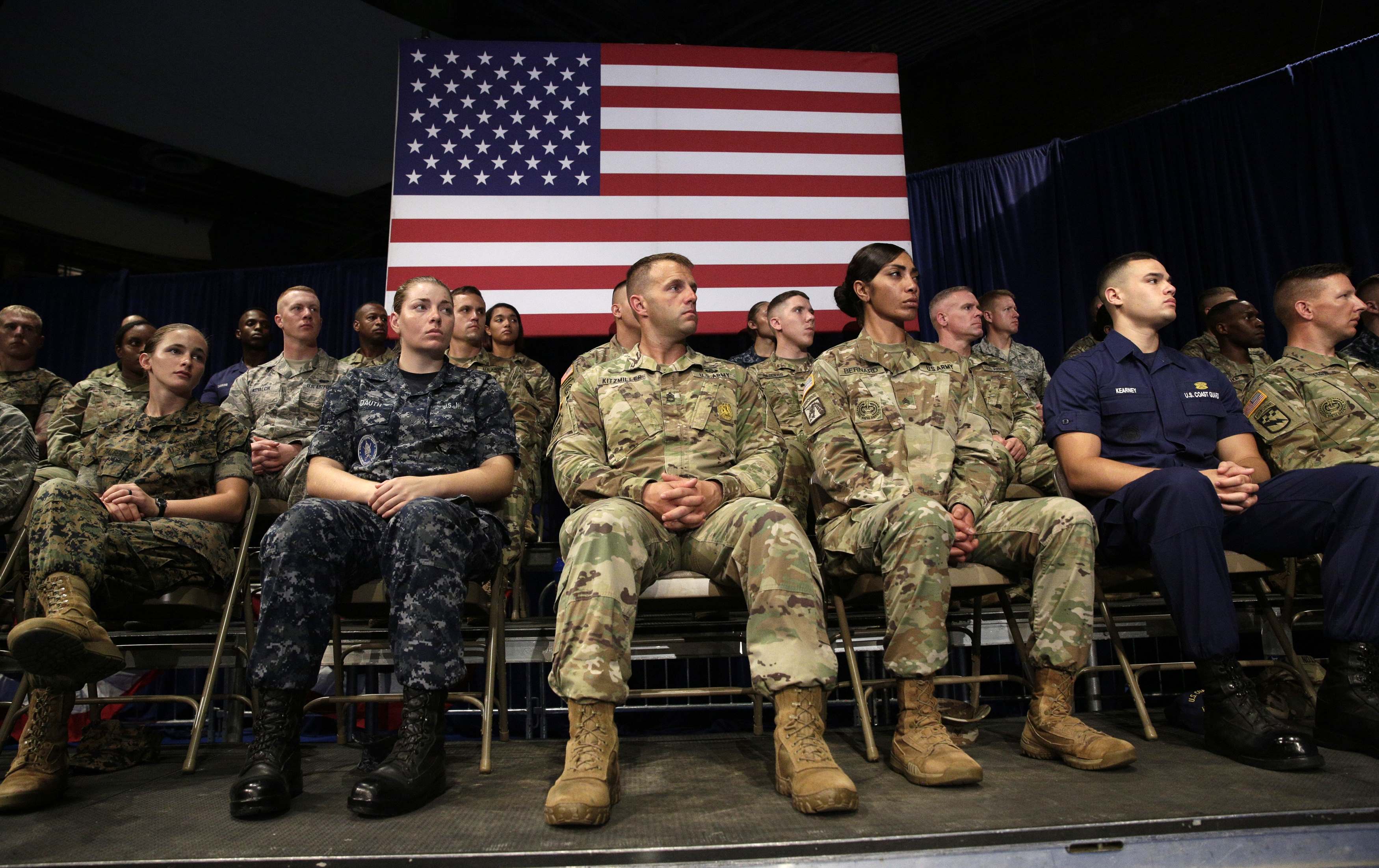 Members of the US military listen as US President Donald Trump announces his strategy for the war in Afghanistan during an address to the nation from Fort Myer, Virginia, US, August 21, 2017. Credit: Reuters/Joshua Roberts

Afghanistan is now Donald Trump’s war. On August 21, the president gave a major policy speech on Afghanistan at Fort Myer near Arlington National Cemetery, where 400,000 fallen American soldiers lie in peace, including 800 from Iraq and Afghanistan. After investing $1 trillion plus and 2,400 US troops killed, Trump said he wanted “an honourable and enduring outcome, worthy of the enormous price that so many have paid.”

In the speech, Trump effectively took ownership of a war from which he had previously distanced himself. To his credit, he said so: his advisers had changed his mind from his gut instincts. Why? Because “When I became president, I was given a bad and very complex hand.” This is an understatement even by British standards, let alone by Trump’s. Given the hand he had been dealt, he concluded, a precipitate withdrawal would leave a vacuum for terrorists and other enemies of the US to fill.

Yet it is likely that Trump’s decision will only delay the inevitable, at more cost to US treasure and lives. The war is in its 17th year, easily the longest in American history. Moreover, the US entered Afghanistan as a relatively fading power. The British Empire and Soviet Union went in at the height of their powers and still failed. Not for nothing is Afghanistan known as the graveyard of empires. In the withdrawal of both Britain and the Soviet Union, the key factor was not the belief that victory had been achieved, but the loss of national will to keep sustaining casualties with no definition of victory nor any indication of the timeline for success.

On December 20, 2010, then vice president Joe Biden was firm in describing the Barack Obama administration’s exit policy: the US would be “totally out” of Afghanistan by 2014, “come hell or high water.”  The Taliban response in effect was: “You have the watches, we have the time” and will wait you out. On January 11, 2013, Trump tweeted his opposition to US troops staying in Afghanistan, complaining that US soldiers were being killed by “the Afghanis we train and we waste billions there.” “Let’s get out of Afghanistan… Rebuild the USA.” Instead, as president, he has chosen to perpetuate, prolong and expand the war.

At their peak, US troops numbered around 100,000 in 2010-11. They were backed by another 40,000 coalition troops from NATO and other countries like Australia. If 140,000 of the world’s finest failed to pacify Afghanistan enduringly, there is little cause to believe that after being boosted by about 4,000 troops, fewer than 15,000 soldiers can now do the job. This has to count as a triumph of hope over experience, meeting Einstein’s definition of insanity as doing the same thing over and over again to get a different result.

Does anyone really expect the Afghan government to withstand the Taliban and other enemies once the foreigners withdraw? The central government controls approximately 60% of the territory. The Taliban are able to attack cities, including Kabul, seize control of the countryside and will look to expand northwards and westwards. Powers around Afghanistan – China, Iran, Russia, Pakistan, India – can already be seen to be positioning themselves for a new normal after the US exit in which they renew the great game.

A speech is not a strategy

The gloomy assessment of the prospects for Afghanistan underlines the truism that a speech does not make a strategy. “Staying the course” is a slogan, not a policy. Trump has effectively reversed Theodore Roosevelt’s famous aphorism – ‘Shout loudly but carry a limp twig’. 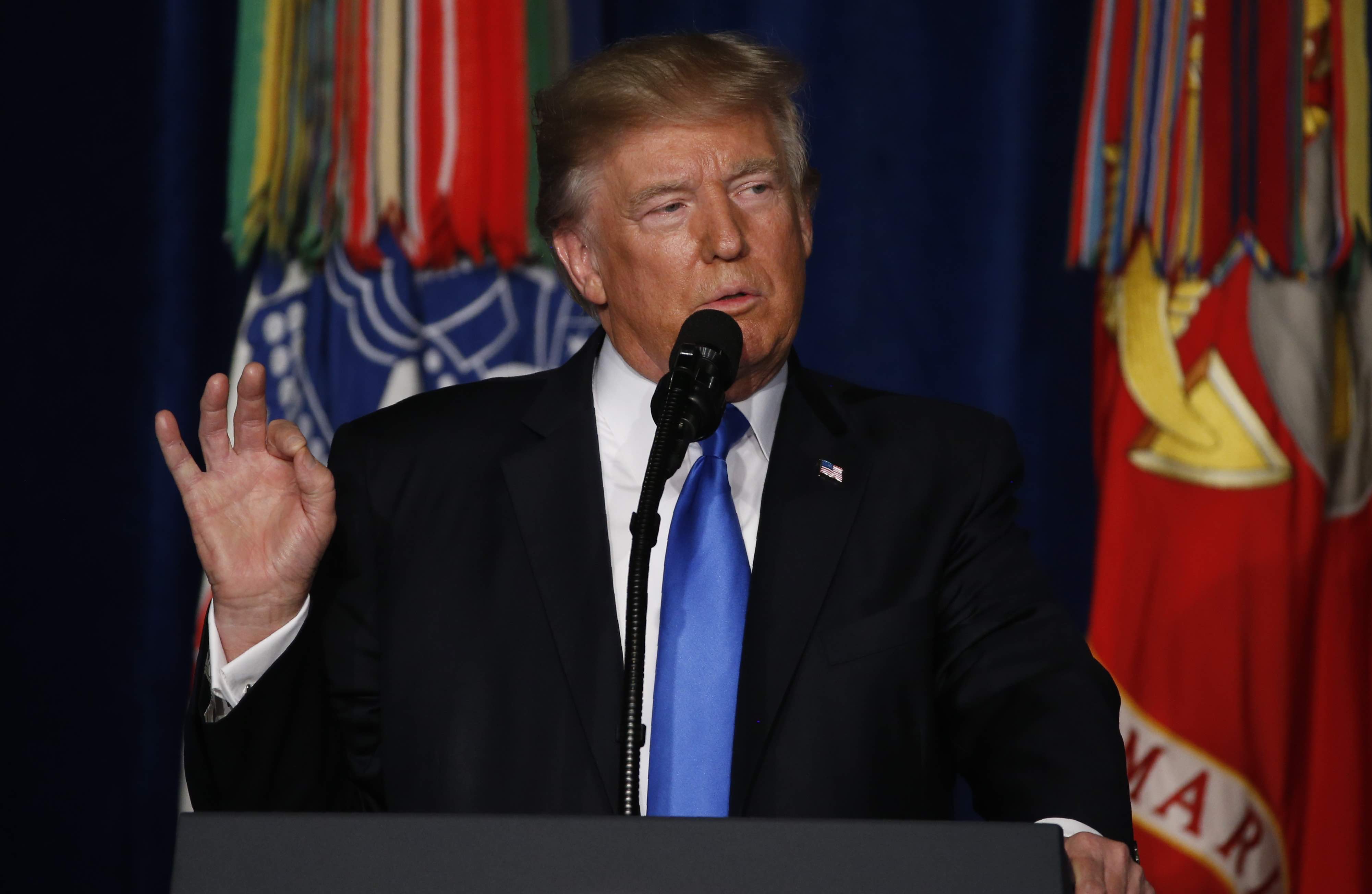 US President Donald Trump announces his strategy for the war in Afghanistan during an address to the nation from Fort Myer, Virginia, US, August 21, 2017. Credit: Reuters/Joshua Roberts

According to counter-insurgency expert David Kilcullen, Trump’s speech hinted at welcome signs of good process in policy development. Kilcullen’s generous assessment highlights that the administration conducted a robust policy debate, asked tough questions, challenged assumptions and conventional wisdom, developed options and made a clear and public choice from among the competing options. After having taken ownership of the war, will Trump will stay engaged with the task for a sustained period?

However, the most important questions were not asked. Does the physical presence of American troops in Muslim-majority countries contain or fan the fires of Islamic terrorism? Do ‘we’ create more terrorists than we kill and capture? Are ‘they’ coming here in bigger numbers because we are there for a never-ending period? Has the war on terrorism since 9/11 created the very conditions that sustain and multiply terrorists?

Scepticism about the prospects aside, are there hints of an emerging Trump foreign policy playbook regarding US objectives and the tactics to achieve them? There are many common elements across the different conflict theatres of Iraq, Syria, North Korea and Afghanistan. They clearly spring from Trump’s self-belief as a skilled negotiator and deal maker. But whether they translate well from the business setting to world politics is an open question.

Firstly, and by no quite a familiar trope, “America First” equates to a policy of “Let’s just mind our own business.”

Secondly, in all his foreign policy dealings, Trump is transactional and pragmatic, not ideological and dogmatic. His objectives are operational, not aspirational: killing terrorists, not nation-building, not constructing democracies – forget about building Afghan institutions and educating its girls.

Thirdly, don’t tip your hand to the enemy. Keep them guessing on the nature, firepower and timing of your moves. Thus, Trump has refused to give a statement on the increase in the number of US troops, even though most informed speculation puts it at around 4,000. This way, the enemy cannot anticipate US military moves and is kept off balance and nervous. Trump does not believe in entrapping himself in timelines for military operations.

Fourth, Trump has recalibrated the executive-military balance. In delegating strategy and tactics to the defence secretary and the generals, he has reversed the Obama-era centralisation of military decision-making in the White House. Despite the centralisation, Obama was remarkably disengaged from and inattentive towards Afghanistan and could not hide his impatience to get out soon as possible. Trump has given the military tactical latitude on the choice of targets, ordinance and timing not enjoyed under Obama. For example, it was the military brass who decided to use the Massive Ordnance Air Blast (MOAB or ‘Mother of All Bombs’ in the popular vernacular) in Afghanistan on April 13.

Under Trump, administration sets policy and Pentagon fights the wars

Micro-management from Washington, DC, does not win battles. They’re won in the field, drawing upon the judgment and expertise of wartime commanders and front-line soldiers, acting in real time with real authority and with a clear mission to defeat the enemy.

Fifth, call out neighbours who tolerate extremists and enable US enemies. An Afghan policy review is automatically a Pakistan policy review. But in fact, Trump has turned it into a South Asia policy review which is interesting. His speech contained some of the toughest language heard from Washington on Pakistan providing safe haven for the Afghan Taliban, Al Qaeda, Haqqani network etc. “Pakistan often gives safe haven to agents of chaos, violence and terror” said Trump, just as he had earlier called out China for enabling North Korea.

In a subsequent commentary, John Bolton argued that Trump should go further and call out China as an enabler of Pakistani nuclear weaponisation and terrorism. “Of all the external actors, China bears primary responsibility for Pakistan’s and North Korea’s possession of nuclear weapons and ballistic missiles,” he wrote in the Wall Street Journal. “In both cases, China recklessly disregarded the risks of proliferation and breached its obligations under the non-proliferation treaty (NPT). China was hardly unaware that Pakistan has fostered and aided Islamic terrorists”, he said. Bolton should know whereof he speaks – he was Under Secretary of State for Arms Control and International Security from 2001-05 and President George W. Bush’s permanent representative to the UN from 2005-06. 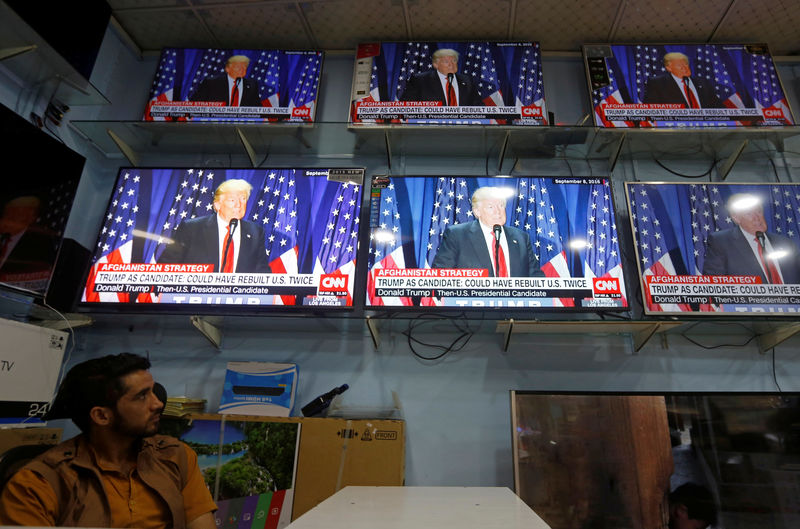 Will Trump succeed in reining in Pakistan where all previous US presidents have failed? For Pakistan, the Afghan Taliban are a geopolitical insurance policy for strategic depth, retaining influence in Kabul, containing Indian influence and projecting its own influence in the region. There is a good historical reason to remain sceptical that Pakistan will withdraw sanctuary and support to its proxies anytime soon.

Sixth and conversely, enlist neighbours whose goals and objectives are in sync. In the case of Afghanistan, this means India. Presidents Bush and Obama asked Pakistan’s generals on what more do they want by way of economic aid and military assistance to stop backing enemies of the US? In trying to incentivise Pakistani good behaviour by keeping India out of Afghanistan, they gave Pakistan a de facto veto over Afghanistan-India relations despite the latter two’s preferences.

Trump has subtly changed the equation: If you keep supporting our enemy, we will bring in India as our strategic partner. The problem for New Delhi is that the change of approaches with each turnover of administration in Washington does not connote consistency of purpose and strategy. India’s challenge is how to take advantage of Trump’s epiphany without leaving itself vulnerable to an American relapse into dependence on Pakistan.

Seventh and finally, let the locals lead. In a twist to Obama’s much-derided but sensible policy, Trump’s America, too, will lead from behind. In Afghanistan, Syria and Iraq, the US will concentrate mainly on training local forces to do the fighting.

Having expressed scepticism about the prospects of Trump’s policy on Afghanistan, the final question is: Should Kabul fall to the Taliban, how much of a threat are they likely to pose to US security? Not much is the surprising answer. Their primary interest and focus is on internal governance. There is no evidence that Mullah Omar was aware of 9/11 plans in advance. The Taliban back in power will be brutal for Afghans, with the reimposition of extremist Islamic law and rule. It would be a setback for India, with sanctuary and support given to anti-Indian jihadists. But it is unlikely to constitute a major security threat to the US.