The combination of knowledge and communication, along with a few other fundamental conditions such as liberty and respect, leads to social, cultural and technological development. 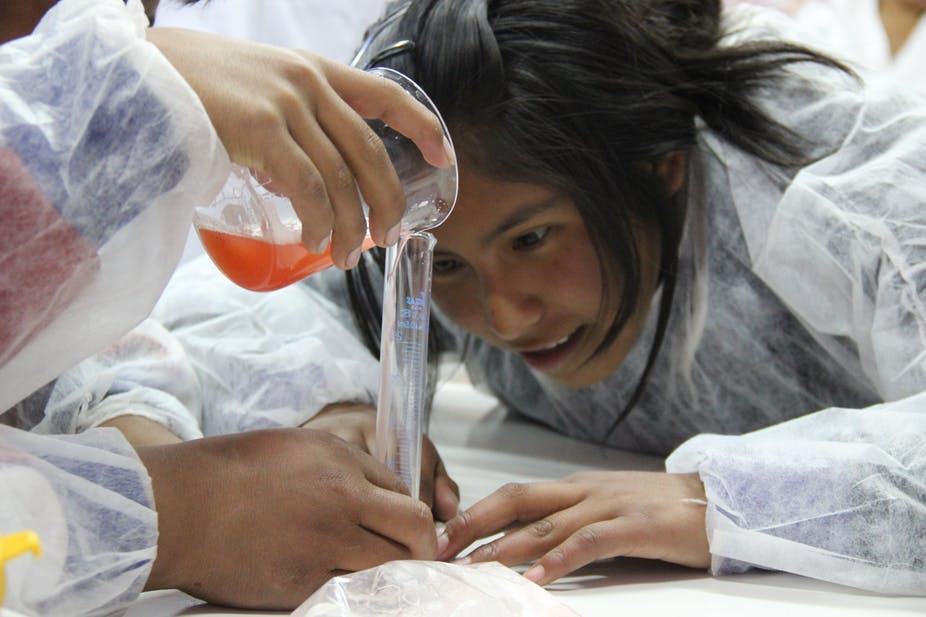 Introducing rural and indigenous communities to science, through experiments and communication, is vital. Felipe Figueira

There is no denying that English is one of the world’s major languages. It’s the mother tongue of nearly 370 million people. English is also very frequently used by scientists in academic journals and book chapters, along with other common languages like French, Spanish and Portuguese.

But what about the billions of people who speak very little English, or none at all? How can we improve their access to scientific information and knowledge?

In a bid to tackle this issue, along with other factors of marginalisation such as distance from urban areas and ethnic exclusion, we and our colleagues created the Imagine Project at the Federal University of Santa Catarina in Brazil. According to a UNESCO report, people living in remote areas and those belonging to ethnic and linguistic minorities are the most vulnerable in terms of access to education. Rural children are four times less likely to ever attend school than their urban counterparts from similar economic backgrounds.

Giving these groups the opportunity to learn and to hear about science is an essential way of including them as citizens.

Imagine Project is an initiative that aims to take scientific knowledge out of the laboratory and share it particularly with rural and indigenous communities. As part of a competition linked to our work we recently translated four winner scientific videos, about different topics such as astronomy and pharmacology, into a number of languages. These feature in the videos as subtitles.

The languages include Tsonga (also known as Changana and spoken in Mozambique, South Africa, Swaziland and Zimbabwe) and Guarani, an indigenous language from Brazil, Paraguay, Bolivia and Argentina.

This and similar initiatives are crucial if scientists are to properly communicate the knowledge they’ve produced; sometimes with the very communities they study or which are affected, in their own languages.

The combination of knowledge and communication – along with a few other fundamental conditions such as liberty and respect – leads to social, cultural and technological development. That is why it is so important for people whose job is to generate knowledge to share their findings with ordinary people.

Open communication has long been seen as a fundamental condition for scientific development. The advent of the internet made even greater, more open communication possible. A scientist can write an article that is available in an online journal or record a video that’s uploaded to YouTube. But what about scientists who don’t speak English, or users who might be interested in what’s being shared but don’t speak English?

It is a general rule of the so-called “hard sciences” that all widely read, high impact scientific journals are in English. For research to be considered internationally, it needs to be in English. Yet, science cannot be properly communicated or popularised unless language barriers are tackled. We knew this when we launched the Imagine Project in 2013. Initially, the project focused on creating a series of hands-on scientific activities to be carried out in rural communities. These involved working scientists, high school students and teachers.

Then our team generated open educational resources in Portuguese that were translated and published online in English, Spanish and French. We are continuously producing new material, including PDF protocols and documentary videos showing our field experiences.

In 2017 we scaled up our ambitions and created Imagine-PanGea, a multilingual science popularisation competition. We were supported by three major organisations that work to popularise science: African Gong, which is pan-African; RedPop, which works in Latin America and the Caribbean; and SBPC, the Brazilian Society for the Advancement of Science.

There have been similar competitions elsewhere in the world that required entrants to work in either English or French. We created a video competition for African and Latin American graduate students across scientific disciplines, asking that their research be presented in a three minute video in either English, French, Portuguese or Spanish. There were 55 entrants.

The three overall winners and the best presentation from each continent had their videos translated into a range of languages. The videos were then widely publicised through the organisations that supported the competition.

A network of institutions and people representing different regions of Africa and Latin America were involved in this initiative. Their home languages and those of the people they worked decided what languages we’d translate videos into. We also relied on them to be our translators – and they didn’t always find this an easy task.

Many of the scientific terms used in the videos did not exist in the indigenous languages we’d chosen. In these instances, we kept words in French, English, Portuguese or Spanish. For example, Portuguese words can be found in the middle of the Guarani subtitles.

Further translations are underway into, among others, Yoruba from Nigeria and Umbundo and Kimbundo from Angola.

The competition was based entirely on voluntary work. We had practically no funding. For the next edition, we’re hoping to find some kind of sponsorship, particularly to offer winners material prizes like goods, money or travel expenses to attend an international scientific meeting.

We are trying to find new translators for Quechua (an Andean language), Berber (from North Africa), Chinese and as many indigenous languages we can get. For this to happen, we’ll need to find more volunteer translators.

This is a new way of thinking about science communication: it’s the kind of people we reach, not the number, that matters. And it’s worked. When the Imagine project was launched, we were told that indigenous Brazilian people would be not interested in learning basic science such as genetics and molecular biology. The critics have been proved wrong.

The Guarani people we’ve worked with have flourished, conducting experiments with DNA and telling the team they want to learn more. In parallel with the Imagine Project, our university has introduced undergraduate degrees specifically to attract people from indigenous nations. In addition, a certain number of places are reserved across all degrees for indigenous Brazilians.

Our long term goal is to get more indigenous and rural people to become real scientists. This is already happening in Brazil: one of our collaborators, Joana Mongelo, is the first Guarani science master’s graduate in the south of the country.

Andre Ramos is Full Professor of Genetics, Federal University of Santa Catarina and Marina Empinotti is PhD candidate in communication studies at University of Beira Interior.