If You Push for Regime Change, You Get the Refugees Too

If Europe and the United States have destroyed the Mediterranean world and the Gulf, let them first restore peace and security in this arc, or else Europe's borders will continue to crisscross Europe itself. 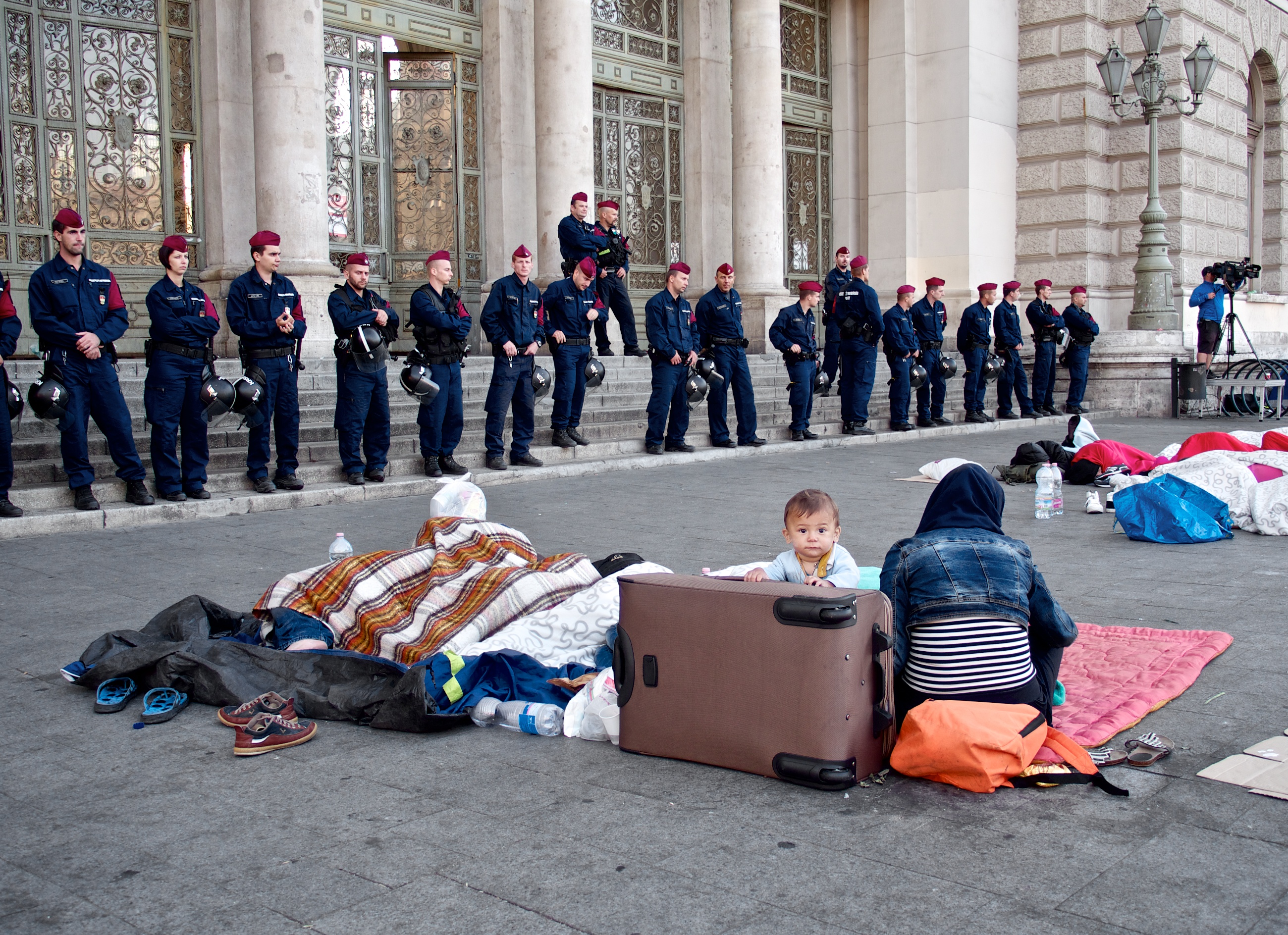 Gruesome reports from Europe – of people drowning as their rickety boats capsize in unforgiving waters, of migrants detained in squalid camps and even summarily executed on the high seas – have hit the headlines with predictable regularity in recent years.

These tragic incidents have a long history. What has changed is the exceptional scale of the migration across the Mediterranean sea. The International Organization for Migration (IOM) estimated that some 30,400 migrants had arrived in Greece by just May this year, compared to 34,000 in all of 2014.

From the beginning of the crisis it was clear to all except European governments that patrolling the Mediterranean and blocking the Channel Tunnel would fail; the land routes, railway networks, and pre-dawn single-queue processions have made these redundant. Government nitpicking about categories such as refugee, asylum seeker, economic migrant, illegal immigrant; deploying FRONTEX (the European Agency for the Management of Operational Cooperation at the External Borders of the Member States of the European Union) to apprehend alien intruders, and planning cordon after cordon to make Europe a protected place – have all been overrun by the crowd of what can only be described as refugees.

Kafila is a Hindi and Urdu word derived from Arabic. It means a caravan, a procession, or a mobile human gathering. It can be a kafila of a nomadic group, or simply the most pervasive flow in the modern world – the flow of refugees or the victims of forced migration in all possible forms including development refugees, countless people rendered homeless and placeless by capitalism, and the relentless modern drive for territorial and financial control that leaves a large chunk of humanity without place.

Now that Europe has its kafila, perhaps it should learn from the way the postcolonial world, particularly India, has faced forced migrations from across its borders since 1947. Ten million refugees came from the erstwhile East Pakistan to India in 1971, without any such doomsday panic. Life rolled on as a kafila. It still does.

The immediate triggers for the rapid increase in migration across the Mediterranean are obvious: Western or Western-backed military interventions in Iraq, Libya, Syria, and Yemen, and the continuing instability in Afghanistan. Migration is also the direct and indirect result of the structural adjustment policies wrecking havoc in post-colonial economies, particularly in Africa; we see foreign investments in land and environmental degradation pushing people off the land and taking away their resources. The current stream of migrants is itself part of a larger chain of trans-African and trans-Asian migrations – as people in places further away move closer to the Mediterranean and Indian Ocean shores to situate themselves for the passage to comparatively secure regions like Europe or Southeast Asia and beyond.

However, even before the current migration flows, there have been massive migrations in the post-colonial world. Enormous internal displacements and consequent internal migratory flows are prominent features in the countries of Asia, Africa, and Latin America. In order to understand which populations are more likely to see migration as a route to security of life, or how the specific processes of decolonisation such as the partition of Palestine and Indian sub-continent have led to migratory flows, it is important to see the present European migration crisis in the light of our collective historical experiences.

The global refugee protection regime, however, is blind to history. It prioritises the concerns of the developed North and reflects a great dissociation of power and responsibility. Wars may be imposed on countries by great powers but the burden of refugee flows these wars create has traditionally been shouldered by countries that had little to do with the wars in question. The creation of Israel resulting in thousands of still displaced Palestinian refugees in Lebanon, Syria and Egypt; the Afghan refugees in Pakistan; and the large number of Syrians, Iraqis and other victims in neighbouring countries are testimony to the capacity and willingness of the South to accommodate refugees. There has been no breast beating of the sort that Europe is indulging in, no cruel closing of the borders. Yet, through all these years the global refugee regime never questioned this dissociation. The debate over protection is thus marked by graded responsibility and a hierarchical history.

Is this so-called global regime even capable of addressing the issue of displacement due to war? The Refugee Convention of 1951 barely touches the problem. It refers to war as an exception, and when it does, it does so in the context of World War II, or to rule out protection to persons accused of war crimes. This is the background in which the question of responsibility for war and displacement assumes urgency. In war and war like conditions, the categorical distinctions between different forms of migration vanish. As the Latin saying goes, Inter arma enim silent leges – in times of war, the law goes mute. At moments like these, the ineffectiveness of the global protection apparatus for refugees becomes apparent.

Any observer of migration processes knows that a situation of protracted displacement and refugee-hood leads to potential loss of citizenship in the home country and, as a consequence, de facto statelessness. Therefore, we have no idea what will happen to the citizenship of these thousands of migrants in Europe – who will remain permanent migrants, always alien, as the Paris Banlieu riots of 2005 have shown. The condition of statelessness is always one of incompleteness – a real existence always falling short of the ideal reality of European citizenship, European entitlements, European legal protection, solemn recognitions by European courts of law, and the avowals by the European Union. Since nationality is generally acquired on the basis of an existing, factual link between the individual and the state – some kind of connection either with the territory (place of birth or residence) or with a national (descent, adoption or marriage) – European rules are now on trial. The laws on statelessness are heavily influenced by the experiences of a succession of European states and they are of no use today in the context of the current migration crisis.

On the other hand, migrants have assumed agency in determining their places of exile with new technologies of communication. These technologies reshape the ways in which people look at migration as a strategy for exiting an insecure environment. It will be important to know not only which population groups are more likely to use migration as a strategy, but also how new technologies enable new transnational networks of mobility, trafficking, the search for shelters etc., and conversely, new mobile forms of control such as FRONTEX.

European colonial rule configured contemporary conditions of differentiated citizenship, victimhood, and migratory flows in the post-colony, through policies of divide and rule, through the arbitrary boundaries it drew between nations. We can say that migration finally incorporates Europe in a post-colonial scenario, as European refugee camps become sites of refuge, internment, and surveillance – evoking images of camps across the world. Differentiated citizenship also emerges in the continually evolving xenophobic, cultural requirements of citizenship in countries like Hungary and Austria.

Indians, Pakistanis and others have a right to question Europe on its immigration and citizenship policies, not just because of the presence of Asians and Africans in Europe but because none of the European countries have borne the flow of refugees that the South has seen.

Europe’s migration crisis follows Europe’s currency crisis. Even as capital moves freely through the world, the Schengen land of free movement is fragmenting back into xenophobic states. One may well ask where the borderlands of Europe lie. If Europe and the United States have destroyed the Mediterranean world and the Gulf, let them first restore peace and security in this arc, or else the borders will continue to crisscross Europe itself.