How Can India Put an End to Racism Against Africans?

In order to fight racism, we first need to acknowledge that it exists. 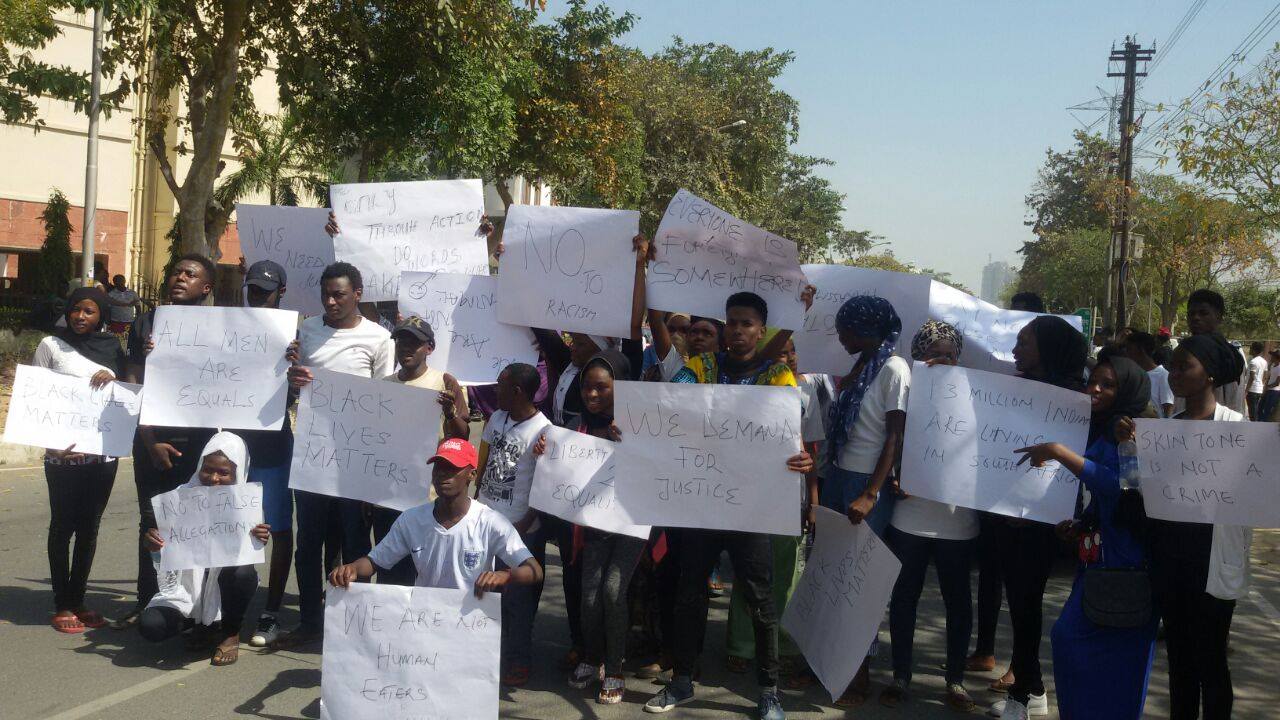 Not even a year has passed since Congolese resident M.K. Oliver was murdered in Delhi that reprehensible attacks on African students in India have resurfaced. What has changed in this past year? Not much. People persist in their prejudice and misconceptions while the government continues to toe the same line on the denial of racism in these crimes.

No response from the government can be effective if it fails to take the victim’s narrative into account. The perpetrators of the crime and the host country cannot be the sole deciding voices on what constitutes racism. Belittling and brushing aside racism and xenophobia as disparate incidents of urban crime is a denial of justice and a violation of the victims’ human rights. Urban crime cannot be an alibi for racism and the two are not forcibly delinked. Why would groups of individuals and mobs think of deriding the law and deliver mob justice? What would be the diplomatic repercussions had the victims been white men from the West? These crimes are telling of the inefficiency of institutions responsible for law and order in the country and the National Human Rights Commission, inconspicuous by its silence.

The government’s response, quick in words but slow and insufficient in action, gives rise to a sense of impunity while remaining ineffective in tackling racist perception of Africans in India. To change this, the government first needs to recognise these crimes as racist and xenophobic, as has been voiced by the official statement of African envoys in India. It needs to then formulate a comprehensive response to these crimes by dismantling ill-conceived and prejudiced images at both the state and individual level. India’s relations with Africa were founded on principles of anti-colonisation and anti-racism. Today, India puts people-to-people contact as the basis for a long-term relation between its people and those from Africa. It is high time that these words were matched by committed actions on the ground.

It is time to recall history and walk the talk on India’s commitment to anti-racism and the cherished notion of vasudhaiv kutumbakam, ‘the world is one family’. The recent racist incidents expose the gap between the ideals and practice of Indian foreign policy, and its communication to the people.

The government’s denial of racism is in contrast to the historic relations between India and Africa, founded on the tenets of anti-colonialism and anti-racism. Moreover, the government’s stand risks jeopardising India’s growing ties with Africa in trade, technology and human resource development. Trade between the two has grown from $1 billion in 1990-1991 to $71 billion in 2014-2015. Of the 5.4 million foreign-born people in India, approximately only 40,000 are Africans, with 25,000 of them being students. Yet, these small numbers are important for the expansion of India’s relations with Africa. The Indian government has been announcing scholarships, grants and credit lines for Africans in the backdrop of the India-Africa forum summits. However, despite these efforts to woo Africa, the government is in denial about Africans facing racial attacks in India, going so far as to say the most recent attacks cannot be termed xenophobic.

Stereotyping Africa and Africans is common in India. These stereotypes are constructs of an economic hierarchy coloured in racist hues. African countries are often insidiously used as a metaphor for under-development. And Africans in India are associated with  “debased livelihood means” such as “drug-peddling and prostitution”. The most recent attack against Nigerians in a satellite town of New Delhi is a case in the point. Locals, without any legal evidence, alleged that the death of an Indian teenager by drug overdose was caused by his five Nigerians neighbours who they believed sold him the drugs.

The government’s efforts to enhance relations between India and the African continent have not been met with a complementary effort to educate people on co-existence and multiculturalism. The Incredible India campaign cannot be limited to attracting tourists alone; foreign nationals from many countries come to India to study and earn a living, just as many Indians residing in different parts of the world do. In the wake of the recent attacks on Africans in India, the official denial of racism hampers efforts to tackle the problem. This, plus the fact that the perpetrators act in mobs regardless of the law, are major causes for their recurrence.

A parallel can be drawn between the recent mob attack on Nigerian students and the mob attack on African students in the Delhi metro in 2014. A crowd chanting nationalist slogans circled the students. The ostensible reason for the attack was that the African males had misbehaved with an Indian woman commuter, even though the police have no register of such a complaint.

Another attack on a young Tanzanian woman student in Bangalore allegedly happened under the watch of a police constable who did nothing to stop it. She was stripped by a mob that sought justice for a road accident in which a Sudanese national’s car ran over a local woman. For one, in India we need to understand that Africa is a continent not a country.

Refusing to acknowledge the racism and projecting such incidents as cases of urban violence means they are unlikely to prick at the conscience of Indian society, as they should.

In the wake of the recent attacks against Nigerians in Greater Noida, booking the perpetrators was left to the jurisdiction of the government of Uttar Pradesh. Given the recurrence of racism, swift action would have called for a direct response from the national police and the Ministry of External Affairs. Meanwhile, African envoys to India rightfully rose to condemn the Indian government’s inadequate response.

In May 2016, after African diplomats protested against Oliver’s murder, minister of state for external affairs V.K. Singh met with members of African communities and assured strong police action against the culprits.

While this was a step in the right direction, clearly more needs to be done. A neighbourhood tainted with racist violence is likely to instigate an exodus of African students, act as deterrent to new arrivals or both. It is also important to realise that racism is not limited to Indians who live in close proximity with Africans.

India’s external affairs and home ministries need to make concerted efforts to sensitise the police and the public at large about how racism contradicts the nation’s past and present ideals.

One way to do this is to raise awareness about how Indians and people of Indian origin are able to live peacefully and prosper in African countries and other parts of the world.

In addition, the external affairs ministry should have a department dedicated to addressing human rights violations against foreigners in the country. The government should pass and enforce appropriate and corrective laws to tackle racism in India.

Indian NGOs also have a role to play. They can take cue from their counterparts assisting distressed Indians in foreign countries, a role recognised by the external affairs ministry. Those working on human rights need to speak out against discrimination and racist violence, and provide positive action and legal support to the victims. They could also lead community awareness programmes against racism and push for adequate legislation, drawing on the Durban Declaration and Programme of Action (2001).

As most Africans in India are students, the human resources ministry needs to hold anti-racism campaigns on university campuses. Educational institutions in India should be told about the importance of scholarship programmes for Africans. Efforts should also be made to educate Indian students about African countries.

Students from African students should be given appropriate lodging and boarding facilities in and around the campus or in the vicinity of other students’ residences instead of being confined to a few ‘African’ neighbourhoods. Such geographical demarcations increase the risk of alienation and stigmatisation.

States must step in

Unlike colonial relations of exploitation, the tenets of South-South cooperation emphasise mutual respect.

Indian ministries and the media should not restrict themselves to running headlines that only focus on the millions of dollars India allocates to Africa but also include African countries’ contributions to India. The fact that Africa contributes to the Indian economy should also be given attention. For example, lines of credit benefit India by creating markets for private and public Indian companies, since they come with the condition that 75% of the required goods and services be sourced from India.

The private sector, given its considerable interests in Africa, also needs to take the lead in demonstrating the continent’s worth to India. Such efforts are important in dismantling fallacious notions of hierarchy and superiority, which the booming Indian economy is currently helping to perpetuate.

And African countries in turn must push for equality as the building block of co-operation. Anti-racism sentiments should be reiterated at the commencement of every India-Africa summit and should be formalised in treaties.

Indeed, anti-racism still remains one of the founding ideals of South-South cooperation. For long, racism has been considered a phenomenon that takes place outside the ambit of the Global South. The moment is ripe to stand up against racism prevailing within Global South societies.

Pooja Jain is adjunct professor at Sciences Po, Paris, and visiting fellow at the Institute of African Studies at EHESS, Paris.