Hindus for Donald Trump? Not Really...

Shalabh Kumar of the Republican Hindu Coalition cast the event not as an Indian American but a “Hindu American” rally, a nomenclature that would make many members of the community uncomfortable. 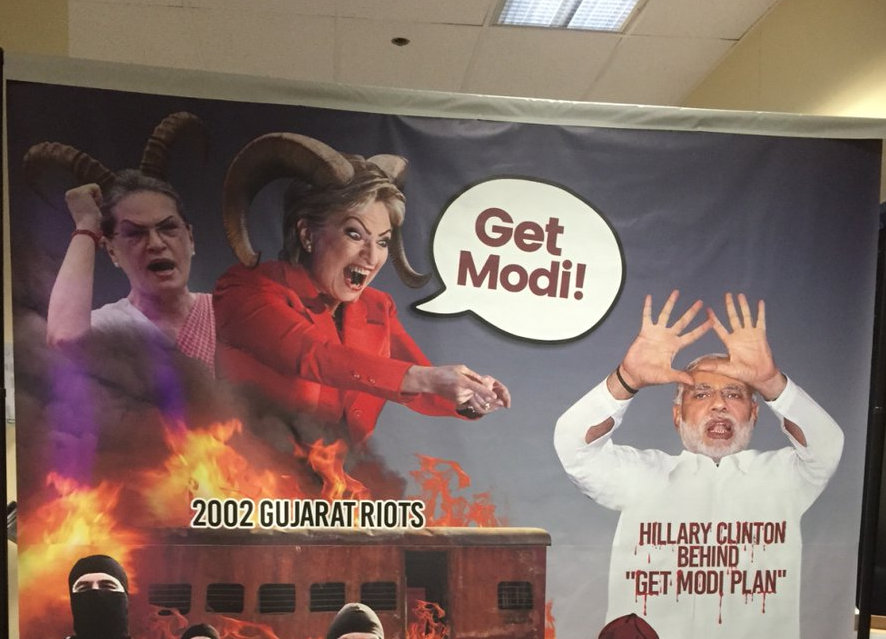 Donald Trump at an event by the Republican Hindu Coalition. Credit: Reuters

Washington: Kitsch times infinity and fact-free times ten is a quick way to describe a rally this weekend by the ‘Republican Hindu Coalition’ where The Donald made an appearance.

Lovers of fact will heap scorn at Donald Trump for inventing a new country called “Hindu” but it might have been subliminal messaging – India equals Hindu, minus Muslims, Buddhists, Jains and Christians.

Thousands of brown people turned up to cheer Trump’s strong-man talk about building walls and such – optics the campaign welcomed, if only as temporary relief from the slow and steady implosion over allegations of Trump’s predatory behaviour with women.

Truth be told, most were there to have fun, watch Malaika Arora and Prabhudeva gyrate to Bollywood songs, take in some bhelpuri and compare notes on the latest fashion trends in kurtas.

Of course, they didn’t mind some bashing of “radical Islamic terrorists” on the side by Trump as he promised to be “best friends” with India. “There won’t be any relationship more important” in a Trump administration. Take that Pakistan. And China.

The audience read all manner of things in Trump’s short speech but he neither mentioned Pakistan nor promised to bring the wrath of America on it. In fact, in two separate interviews to Indian journalists before the event, Trump was careful not to take sides.

If anything, he was pure Woodstock in the peace and love he preached between neighbours. “Well, I would love to see Pakistan and India get along, because that’s a very, very hot tinderbox.” If they couldn’t, they could always bank on him to play “mediator or arbitrator,” he told the Hindustan Times.

‘Holy cannoli’ sighed all those who know anything about India’s position on the Kashmir dispute and its allergy to outsiders poking their nose in it. But facts and delicacies only cloud the mind at a Trump rally where things come in black and white. Mostly white. Anyway, the man has bigger problems on his nimble hands than Kashmir. They are called women.

For rally organiser Shalabh Kumar, the purpose was to show his own political muscle to the Republican set-up – producing a 5,000-strong crowd topped by a $1 million donation to the Trump campaign is significant. His wealth and perceived proximity to Prime Minister Narendra Modi make him a player. And now he is busy arranging a marriage between Republican and Indian values whether they match or not. Trump is virulently anti-immigrant but Kumar and several rally attendees took great pains to point out that the candidate opposes only “illegal immigration”. Hindu Americans are legal and they patiently wait for their green cards for decades. Illegal immigrants are hurting them too.

Kumar, a Punjab-born multi-millionaire from Chicago who made his money in the electronics industry, is a good fit for these divisive times. He cast his event not as an Indian American but a “Hindu American” rally, a nomenclature that would make many members of the community uncomfortable.

This slicing and dicing of the small three-million Indian American community would leave Kumar with insignificant numbers – most Indian Americans support the Democratic Party because of its more liberal policies on immigration and social issues.

Polls show 70% of the community is leaning Hillary Clinton’s way and she may get even a bigger share of the vote than Barack Obama because of Trump’s anti-immigrant rants.

By introducing the term “Hindu American” into political discourse, Kumar is trying to force a formal divide. Hindu organisations, most of them supported by the VHP and the RSS, have always existed in the US but in a socio-cultural context. They run summer camps for Indian American kids fashioned around Hindu beliefs and traditions to keep cultural bonds alive.

But in the political arena, it’s always been a composite ‘Indian American’ identity that prevails embracing adherents of all Indian religions. Some in the younger generation have gone further to build a ‘South Asian’ identity to include Pakistani and Bangladeshi Americans in its fold. But that’s a step too far for most Indian Americans.

Kumar offers them a purely Hindu identity, which also plays well into the sense of frustration that many Indian Americans feel in the face of continued terrorist attacks in India by Pakistan-based terrorists. He then gives them the Trump option – a strong American leader is just the partner Modi needs for a real coming together. He taps into the mini Gujarat of New Jersey whose loyal Modi supporters are always ready to fill a hall, especially if there is Bollywood entertainment to follow.

Modi’s face loomed large on video screens at every opportune moment throughout the evening to embed the idea of a Trump-Modi alliance of “strong leaders.” If you still didn’t get it, you could take the rally’s main flier home – a bizarre postcard showing Clinton and Sonia Gandhi with horns on their heads leaping out of flames to trap Modi for the Gujarat riots.

Was just handed this at Hindu event in NJ where Trump is about to speak pic.twitter.com/yiAOG3b5vm

One could write an entire essay on the misogynistic imagery to say nothing of the utter misrepresentation of history – it was the Bush administration that revoked Modi’s visa, not the Obama administration in which Clinton served as secretary of state.

But facts are rarely important in a high-stakes political game, which Kumar is playing with gusto.