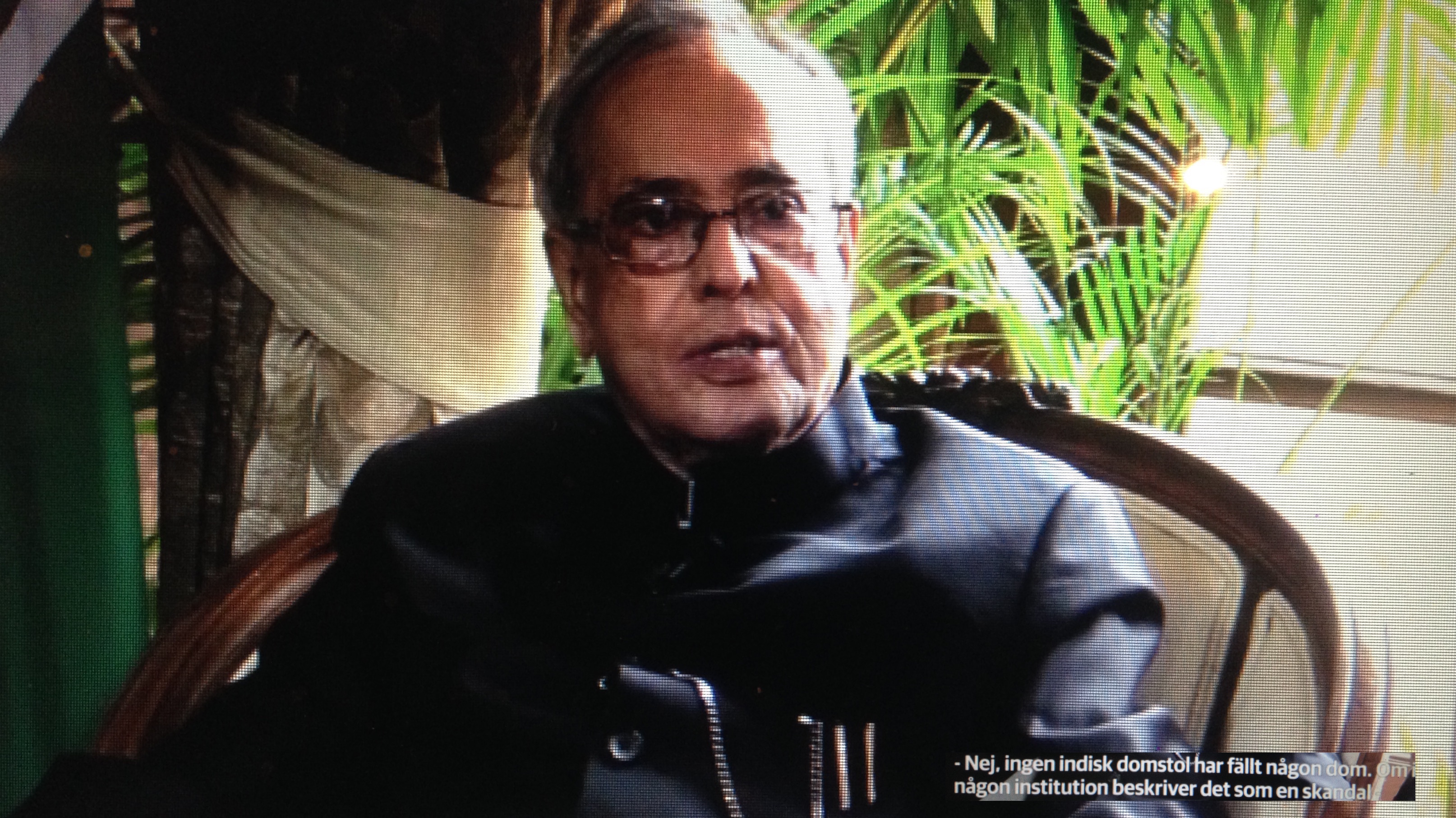 New Delhi: Ordinarily, Pranab Mukherjee making light of the Bofors scam by saying it could not be called a “scandal” would have set off a huge controversy with politicians from non-Congress political parties weighing in how the Rajiv Gandhi-era arms deal involving payoffs to middlemen – prominent among them the late Ottavio Quattrocchi –  set the stage for future acts of corruption in high places.

But Mukherjee is now the President of India so his remarks, in an interview to the Swedish daily Dagens Nyheter on the eve of an official visit to Sweden are being politely ignored by one and all. BJP president Amit Shah at his May 26 press conference said he would not wish to make any observations on what the President had said. And most newspapers, barring the Indian Express, which tucked the matter away on an inside page, chose not even to report this presidential gloss on what  a generation of Indians believed was the scandal of the century.

Here’s a brief transcript of one of the relevant parts of the interview from the trascript prepared by The Wire from the video that the Swedish newspaper uploaded:

Question: Many Swedes still think about the Bofors afair when it comes to the relationship with India. How would we make sure such a thing does not happen again. You said earlier that this was not a scandal.

Pranab Mukherjee: No, first, point is no Indian court has given a verdict on it as though process of trial is going on, and unless somebody, some authoritative institutions, describe it as a scandal and punish it how could you say that it is a scandal? You may have some doubt, you may have some suspicion, but that’s not the proof.

On May 25, the Indian ambassador, Banashree Bose Harrison, wrote to the newspaper complaining about the manner in which the Bofors question was represented on its website. The ambassador said this was “all the more inexplicable since you told me that Bofors is not of interest to your readers.”

The Dagens Nyheter reproduced the ambassador’s complaint but has also revealed that its editor, Peter Wolodarski, who conducted the interview, was asked by the Indian government to “retract” all portions of the interview on Bofors:

In a telephone conversation with DN prior to the publication of the article the Ambassador made a direct request that DN was to retract sections of the interview mentioning Bofors. She also warned that the planned state visit was at risk of being cancelled.

“I told the Ambassador that we couldn’t accept her demands. The president became engaged and was upset when Bofors was mentioned during a question regarding how we can avoid corruption today. Of course we had to tell our readers about his reaction”, says Peter Wolodarski…

“I find the Ambassador’s reaction regretful. It is surprising that someone representing the world’s largest democracies is trying to micromanage which questions we should ask a head of state, and which answers should be published”, says Wolodarski.

This is how Peter Wolodarski, editor of the Dagens Nyheter, described the Bofors part of his interview with President Mukherjee:

Hidden payments in the millions were made to a company in Switzerland, which was controlled by an Indian, and the corruption charges led up to the top of the Congress Party. In unclear circumstances, the Swedish Inspector-General of Military Equipment was killed in the tunnelbana/metro in Stockholm.

The Bofors Affair’s explosive power was so great that the name became a derogatory adjective in the Indian language – “there is something bofors with this car.” The Affair contributed to then Prime Minister [Rajiv] Gandhi’s defeat in the parliamentary elections in 1989. And in both India and Sweden, several investigations were initiated.

In New Delhi, we are skilfully assured that “the Bofors ghost” is buried, and perhaps that change in particular has contributed to the [forthcoming] state visit.

I didn’t plan on taking up the old armaments corruption scandals, but rather on asking a question about how new Bofors affairs with the accompanying corruption can be avoided, especially if trade between Sweden and India is to increase.

– First of all – it is yet to be to be established that there was a scandal. No Indian court has established it, he reminds us.

– I was the defence minister of the country long after Bofors, and all my generals certified that this is one of the best guns we are having. Till today, Indian army is using it.

– The so-called scandal which you talk of, yes, in the media, it was there. There was a media trial. But I’m afraid, let us not be too much carried by publicity.

So it was a media scandal?

– I do not know. I’m not describing it, you’re putting that word. Don’t put that word. What I am saying is that in media it was publicised. But up to now, no Indian court has given any decisive verdict about the alleged scandal.

Mukherjee will travel to Sweden next week in what will be the first visit by an Indian President to the Scandinavian nation which is home to the Bofors gun.

While analysts and constitutional experts — and those reporters and investigators who probed the Bofors scandal only to see the case wither on the vine of political indifference — will debate each other over the question of whether Pranab Mukherjee erred in his assessment, the President himself admitted he misspoke in one aspect during the interview:

“More than 30 minutes have passed,” writes Wolodarski. “President Pranab Mukherjee concludes the interview, but insists on making a clarification before he stands up to briefly guide us through the paintings in the presidential building’s State Corridor.”:

– One thing I must correct, he says.

– Two, three times during the interview, I have used the word Swiss. I of course meant Swedish.

In her letter to Dagens Nyheter, the Indian ambassador said the recounting of this “off-the-record correction” was “unprofessional and unethical.”

The newspaper has defended itself on this charge, saying it had only “lightheartedly mentioned  the fact that the President mixed up Sweden and Switzerland several times.”