Migrants say they fear the diplomatic crisis will leave them destitute, jobless and trapped in the Gulf. 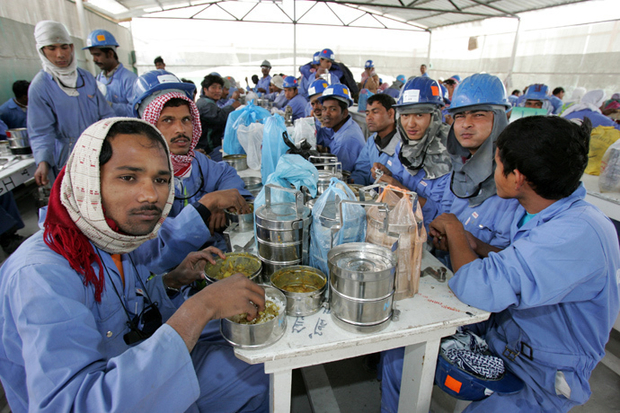 The majority of South Asians in Qatar work in construction.

South Asian migrant workers in Qatar say they fear the diplomatic crisis with GCC neighbours will leave them destitute, jobless and unable to get home.

Described as the “invisible majority“, expatriate workers from South Asia form up to 70% of Qatar’s population, the majority of whom are from India, Nepal, Pakistan and Bangladesh.

But their already tenuous existence in the Gulf state – which involves long hours of work in scorching temperatures, poor pay and basic living conditions – could be exacerbated by the standoff between Qatar and its neighbours.

Ravi Shankar, an Indian construction worker in Qatar, told Middle East Eye that the camps where many workers lived were brimming with “tension”.

“Everyone inside the camp is panicking and scared about what lies ahead,” said Shankar. “Lot of people are asking if our pay will come on time or if we will be stranded here in Qatar.”

Like many South Asians, Shankar has faced instances where he had not been paid on time, leading him and many workers to desperately search for alternative sources of income.

The majority who come to work in the Gulf as builders or domestic labourers do so as a means of escaping poverty and send back their wages back to their home country.

Faisal, who has lived and worked as a driver in Qatar for 10 years, said that many were afraid of losing their source of income and being forced to leave the country.

“Many people are scared that their dreams of building a house back home and getting married will be dashed if the situation worsens,” said Faisal. “There is no jobs back home so people are sitting here waiting to see what happens next.”

The majority of construction materials used to build infrastructure in Qatar comes via roads through other Gulf countries.

The blockade imposed on the country could mean a delay in many construction projects across Qatar and the potential for many migrant workers to be temporarily benched or not paid on time.

Nick McGeehan, a Gulf researcher at Human Rights Watch, said he feared the workers could become the “forgotten victims” of the crisis.

“Anything which affects the Qatari population is likely to affect the migrant worker population and to a far greater degree,” he said.

Vani Saraswathi, the associate editor of Migrant-Rights.org, a GCC-based NGO, said that her organisation feared many workers could be stranded and not paid because of the crisis.

“We’ve seen for instance in Saudi Arabia, that because of the economic downturn, thousands of workers are now stranded because they weren’t being paid, or had their visa not renewed by the sponsor,” said Saraswathi.

“Qatar might not have enough financial liquidity in the market,” said Saraswathi. “This means that the government itself may not pay its contractors on time, affecting the entire supply chain.” 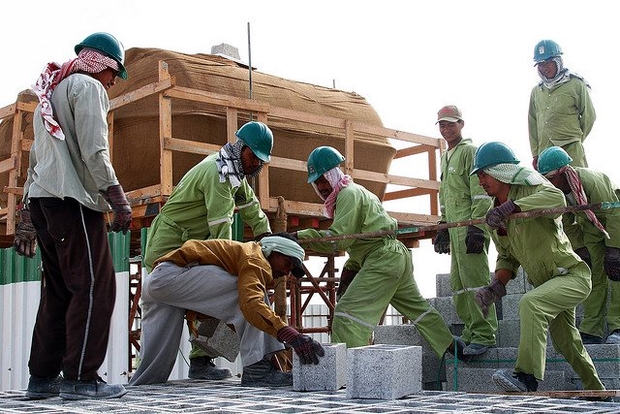 Amnesty International in 2013 found construction companies connected to the Qatari government had delayed the payment of workers or did not pay them on time.

Thousands of workers are reliant on their salaries to pay debts from recruitment fees that were levied on them illegally before coming to Qatar.

Also read: Roots of Current Gulf Crisis Go Back to Arab Upheavals of 2011

These fees often include the worker being forced to pay for their airfare from South Asia and their work visa, often at inflated prices.

Bangladeshi workers paid as much as $5,200 in recruitment fees, according to an investigation by New York University’s Stern Centre for Business and Human Rights.

Foreign workers with residency permits in Qatar were also banned from entering the UAE on June 8. Saudi and Bahrain have not confirmed whether they will also follow the Emiratis in imposing the same ban.

Some foreign domestic workers, namely maids, are feared to be vulnerable under these rules as many are sent to different parts of the Gulf to work in other households during Ramadan.

Companies that are subcontracted to provide workers are required to bear the expense of their travel to and from their home countries at the beginning and end of the workers’ contract term.

Direct flights cost more than those with a transit destination like Dubai or Muscat.

But with the UAE, Saudi Arabia and Bahrain banning flights in and out of Doha, access to budget airlines that transit via Dubai will be prohibited.

This creates particular challenges for South Asian migrants, as Fly Dubai and Air Arabia, two airlines that provide the cheapest tickets to Asia, are both headquartered in the Emirates.

“Everyone is trying to call the travel agents back home in India to re-arrange their flights or find out whether they can go to other places in the region,” said Shankar.

“Lots of the Muslim workers were planning to go back home for Eid but now it seems like these plans will be put on hold.”

Campaigners fear that the inflated prices will be passed down to the workers.

Iran confirmed on Sunday that it had sent 90 tonnes of food on five cargo planes to Qatar, as Turkish dairy products replace Saudi goods on Qatari supermarket shelves.

India has also hinted at plans to send planes full of food in the coming days.

Also read: Qatar-Saudi Rift is Part of the Turmoil Trump’s Visit Left Behind in West Asia

Qatar reassured its citizens and residents that the blockade on its ports will not impact individuals.

But Saraswathi feared that if the situation continues for another few months, then the migrant workers who live in camps located far from the city will be hit hardest.

“The worry is that the country may give priority to stacking shelves that are visible to the world,” said Saraswathi.

“Low-income workers will have less access to food due to their greater isolation, but reports from the ground as of today show no shortages in stores near labour accommodation.”

This article was originally published on Middle East Eye.