The trigger of the current crisis was ostensibly a recent speech by Qatar’s emir, but geopolitics sheds more light. 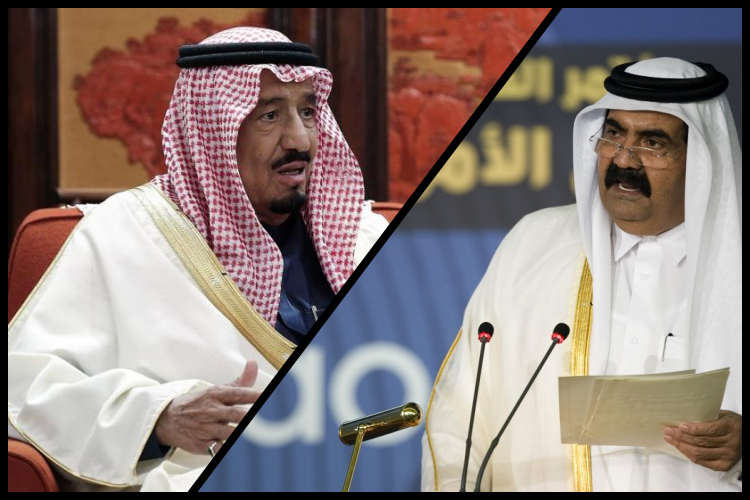 Long-simmering tensions between Saudi and Qatari rulers have burst like a thunderclap. The Saudis and two Gulf allies suddenly moved to severe diplomatic ties by withdrawing diplomats, also cutting off land, sea and air access to Qatar, and blocking Qatari websites and broadcasts.

Though the trigger for this crisis was reports of a speech by Qatar’s Emir Tamim bin Hamad Al Thani on May 22, its roots lie in the Arab Spring upheavals of 2011 and aftermath. Unlike his fellow Gulf monarchs, Tamim’s father, Hamad bin Khalifa Al Thani backed the popular uprisings, angering King Abdullah bin Abdul Aziz of Saudi Arabia. The Saudi dynasty, administering 2 million square kilometers of the Arabian Peninsula, could not tolerate a puny sheikhdom pursuing a foreign policy opposed to its own. Its latest dramatic step, orchestrated with the United Arab Emirates and Bahrain, is designed to bring Qatar in line with the Big Brother of the Gulf.

The state-run Qatar News Agency’s report of the speech delivered by Emir Tamim in Doha was instantly noted by the media in the region. As summarised by Saudi-owned, Dubai-based Al Arabiya TV channel, the Qatari ruler endorsed the Muslim Brotherhood, Hamas and Hezbollah, noted that US President Donald Trump’s rule will not last long, adding “There is no wisdom in harbouring hostility towards Iran.”

Within hours, condemnation poured in from social and traditional media outlets in Saudi Arabia, the UAE and Bahrain. Qatar’s repeated explanations that its news agency had been hacked, that its emir made no such statements, were ignored. To prove its case, the Qatari government could have distributed the verbatim transcript of the ruler’s address, but did not.

In Washington, Trump tried to take credit for the blockade, tweeting, “They [Saudis] said they would take hard line on funding extremism and all reference was pointing to Qatar.”  By contrast, US Secretary of State Rex Tillerson and Secretary of Defense Gen. James Mattis called for calm, offering to help defuse the crisis.  After all, Qatar has hosted the Pentagon’s regional headquarters at Al Udeid Air Base since 2002, housing 10,000 troops and used to bomb Islamic State targets in Iraq and Syria.

It’s crucial to consider the context of Tamim’s speech. He had a cordial meeting with Trump in Riyadh on May 21 and during photos, Trump said that it was “an honor” to be with him, referring to Qatar’s plans to buy “some beautiful US military equipment”. Two days later the emir addressed 650 National Service military graduates in Doha, an appropriate occasion to discuss military affairs. Therefore he may have referred to the US-Saudi military cooperation agreement and Trump urging Gulf States to build an alliance against Iran, described by the emir as an “Islamic power.”

Those spewing anti-Qatar rhetoric overlook that both the House of Saud and the Al Thani dynasty belong to the ultra-conservative Wahhabi subsect within Sunni Islam, the difference that Wahhabi preachers do not regulate Qatar’s social life. It’s also worth noting that Qatar joined the Saudi-led military coalition against the Shia Houthis in Yemen in March 2015.

Another material fact: Qatar shares the North Dome–South Pars gas field with Iran. At 9,700 square kilometres, the field is the largest of its kind in the world, with its South Pars section, about a third of the total, lying in Iran’s territorial waters. Aggregate recoverable gas reserves of this field are the equivalent of 230 billion barrels of oil, second only to Saudi Arabia’s reserves of conventional oil. Income from gas and oil provide Qatar with more than 60 percent of its GDP and roughly 85 percent of export income. Qatar’s population of 2.5 million has a per-capita GDP of $74,667, among the world’s highest.

Rising state revenue enabled Emir Hamad to financially help terns of thousands of Lebanese who lost homes and businesses during the Israeli-Hezbollah War in 2006. After the Hamas–Israeli War in the Gaza Strip in November 2012, he stepped in to aid Hamas and displaced residents of Gaza. By then, Hamas leader Khaled Mashal had moved the party headquarters from strife-torn Damascus to Doha. Emir Hamad’s generosity received massive publicity, thanks to the pan-Arab Al Jazeera satellite channel he had set up in 1996, much to the chagrin of Saudi royals.

Whereas Hamas is a terrorist organisation, according to the US and the EU, that is not the case with Saudi Arabia. Only in March 2014 did Riyadh declare the transnational Muslim Brotherhood a terrorist group, with the UAE following later that year.

From the mid-1950s to 1990, Saudi Arabia was the prime financial and ideological backer of the Brotherhood, which originated in Egypt in 1928. This stopped when Brotherhood leaders opposed the stationing of American troops on Saudi soil on the eve of the US-led coalition’s military campaign to oust occupying Iraqis from Kuwait in 1991.

Since then the Brotherhood has renounced violence. Its candidate, Mohamed Morsi, won the first free and fair presidential election in Egyptian history in June 2012. Though his first foreign trip was to Riyadh, his hosts never forgave him for visiting Tehran to attend the Non-Aligned Movement Summit in August. Two months later, Emir Hamad met Morsi in Cairo, and his government invested $6 billion in Egypt’s infrastructure projects.

The military coup against Morsi in 2013, denounced by Doha, was applauded by Riyadh. The hostility of Saudi and Emirati royals towards the Brotherhood stems from the fact that the Brotherhood’s leaders demonstrated that Sharia rule could be established in a Muslim country by ballot, reiterating that ultimate power lies with the people, not a dynasty. That explains why the Sunni Brotherhood feels at one with the Islamic Republic of Iran, a predominantly Shia country.

When Qatar, then ruled by Emir Tamim after his father’s abdication in June 2013, refused to abandon its pro-Brotherhood policy in March 2014, Saudi Arabia, the UAE and Bahrain withdrew their ambassadors from Doha. They restored diplomatic ties in January 2015 after the emir compelled some foreign Brotherhood activists to leave for Turkey, which remains pro-Brotherhood, and silenced others.

A new element in this go-around is the Trump factor. “What is happening is the preliminary result of sword dance [of Trump],” tweeted Hamid Aboutalebi, deputy chief of staff of Iran’s President Hassan Rouhani, referring to Trump’s participation in a dance with Saudi King Salman.

However, the seed for Saudi-American love-in was laid in mid-March when Trump lunched with Saudi Deputy Crown Prince Muhammad bin Salman at the White House. A glimpse of the joint Saudi-American plan for Iran could be gleaned during the prince’s May 1 television interview. “We know we are a main target of Iran,” he said. “We are not waiting until there becomes a battle in Saudi Arabia, so we will work so that it becomes a battle for them in Iran and not in Saudi Arabia.”

That statement, combined with the June 2 New York Times report, headlined “CIA Names the ‘Dark Prince’ to Run Iran Operations, Signaling a Tougher Stance,” signals that the US CIA and the Saudi intelligence agency Al Mukhabarat al Aamah may be poised to launch a dirty-tricks campaign to promote regime change in Iran.

Riyadh’s latest action against Qatar seems to be a preamble to launching a regional cold war against Iran. But this move is likely to throw Qatar into Iran’s arms in order to survive. The Saudi press reports that Rouhani telephoned Emir Tamim, likely offering to meet Qatar’s need for imported food and medicine.

The growing cordiality between Qatar and Iran will jeopardise the future of the Pentagon’s Al Udeid Air Base. The ill-informed, impulsive Trump is opening a Pandora’s Box by aligning his administration unequivocally with an autocratic Saudi monarchy, which has no track record of showing strategic probity politically, diplomatically or in its use of military force on its own.

Dilip Hiro is the author of A Comprehensive Dictionary of the Middle East (Interlink Publishing Group, Northampton, MA). Read an excerpt. His latest book is Indians in a Globalizing World: Their Skewed Rise (HarperCollins India)