The US, Saudi Arabia, Britain, France and other nations are demanding the UN Security Council takes action to ensure aid convoys reach millions of needy Syrians as violence diminishes. 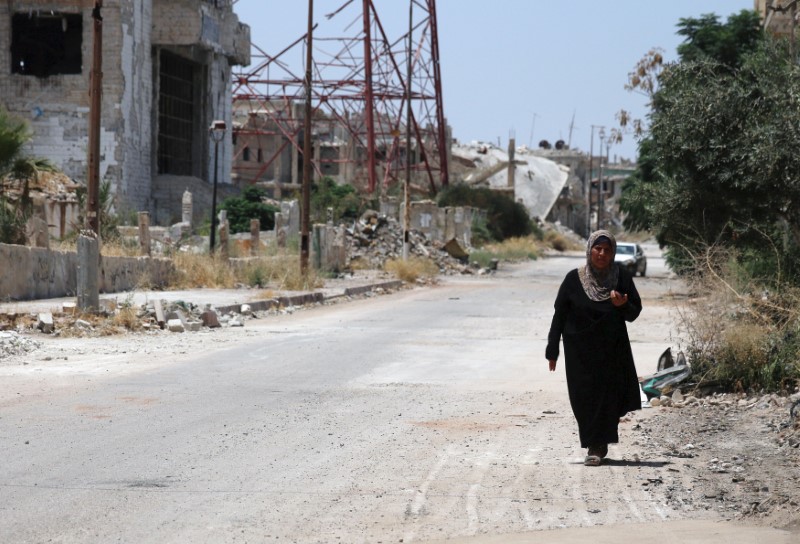 A woman walks along a street in Deraa, Syria July 25, 2017. Credit: Reuters/Alaa Al-Faqir

Geneva: The US, Saudi Arabia, Britain, France and other nations are demanding the UN Security Council takes action to ensure aid convoys reach millions of needy Syrians as violence diminishes, according to a letter seen by Reuters on Wednesday (July 26).

In a rebuke to Syrian President Bashar al-Assad and his allies Russia and Iran, the letter signed by 14 heads of mission in Geneva raised “serious concerns” about the implementation of seven Security Council resolutions on humanitarian access in Syria.

“We remain extremely concerned that the United Nations is being excluded from sending humanitarian convoys to besieged and hard-to-reach areas inside Syria,” said the letter, dated July 24 and addressed to the Security Council president, Chinese ambassador Liu Jieyi.

“The trend has worsened significantly in recent months,” the signatories said, adding that since April only two UN-supported convoys had been able to access territory besieged by forces loyal to Assad.

Nobody at the Syrian mission in Geneva responded to phone calls and an emailed request for comment.

Although the violence in Syria has fallen off since Russia, Iran and Turkey launched a plan for de-escalation zones in May, the lessening in fighting has not translated into more aid deliveries.

The UN says 540,000 people in 11 locations are still besieged, mostly by Assad’s forces, while four million Syrians are hard to reach with aid.

Forces loyal to Assad have taken over several besieged zones this year after the occupants have suffered chronic food shortages for months.

Many people trapped in such sieges have been evicted, often going to the northwestern province of Idlib, which this week fell under the control of Hayat Tahrir al Sham, a jihadist alliance led by al Qaeda’s former Syrian branch.

The UN has frequently called on “all parties” to respect humanitarian law and to allow aid access, but its pleas tend to focus on the suffering of civilians, without naming and shaming any specific warring side.

The letter quoted Council resolution 2139, from February 2014, which urged the Syrian authorities in particular to allow “rapid, safe and unhindered humanitarian access” for aid convoys, and promised the Council would “take further steps in the case of non-compliance.”

It is likely to come up for discussion on Thursday when the Security Council holds a scheduled meeting on Syrian aid, and when countries with influence in the six-year Syrian conflict meet in Geneva to discuss the humanitarian situation.

They do not include Russia or China, veto-wielding members of the UN Security Council which have frequently blocked resolutions that sought to condemn Assad.

Despite the Council‘s demands for access and compliance with international humanitarian law (IHL), there was still a lack of aid deliveries, adequate protection of civilians, medical access and freedom of movement in hard-to-reach areas, the letter said.

“We urge the UN Security Council to underline to member states of the UN, in particular the Syrian authorities: (i) protections enjoyed by civilians and medical missions under IHL; and (ii) the need for the UN to determine the planning, delivery and monitoring of cross-line humanitarian assistance,” it said.

The signatories asked Liu “to raise urgently this vital issue” at the next UN Security Council meeting, recalling the Council‘s 2014 resolution which said it would “take further steps in the case of non-compliance.”