The far-right Alternative for Germany rails against what it calls the "Islamisation of Europe" and denies it is racist. 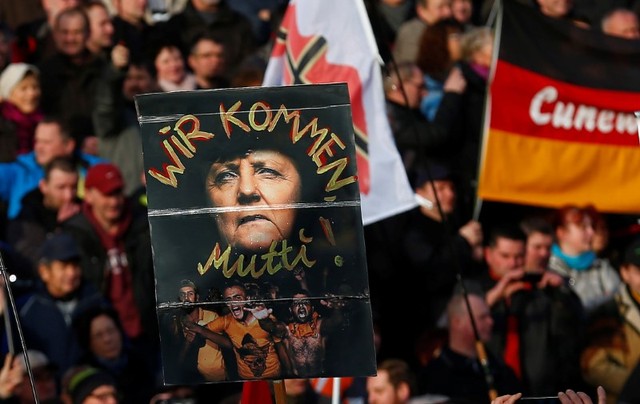 Supporters of the anti-Islam movement Patriotic Europeans Against the Islamisation of the West (PEGIDA) hold a poster depicting German Chancellor Angela Merkel with text reading "We are coming, mommy!" during a demonstration in Dresden, Germany, February 6, 2016. Credit: Reuters

Thousands of protesters are expected in the eastern city of Dresden on Saturday when the anti-Islam PEGIDA movement celebrates its third anniversary.

PEGIDA – Patriotic Europeans Against the Islamisation of the West – has seen dwindling crowds since early 2015, with the AfD absorbing some of its supporters.

The AfD won almost 13% of the vote in the September 24 national election, making it the third largest party in the Bundestag, or lower house of parliament, and the first far-right party to win seats in more than half a century.

Exit polls showed that 60% of AfD voters cast a “protest vote”, with many angry at Chancellor Angela Merkel’s 2015 decision to allow in over a million mainly Muslim migrants.

Experts say the party’s rise is also part of a global trend that has brought right-leaning parties or leaders to power in Poland, Hungary, and most recently, Austria.

Germany’s mainstream parties have said they will not work with the AfD at a national level, but activists say they must stake out clear resistance to AfD comments on Islam and other issues in the parliament, and 14 out of 16 state legislatures.

“We’ve seen a strong and growing movement of people resisting the AfD in recent months in big cities, in small towns, and now we need that movement on a national scale,” said Nora Berneis of Aufstehen gegen Rassismus, or Standing up against Racism.

The group is planning a large protest in the northern city of Hanover on December 2 when the AfD meets for a party conference.

The party has drawn sharp criticism from a German journalists’ group for seeking data on the ethnic backgrounds and political views of journalists who want to cover the conference.

Christoph Schott, with the global activist group Avaaz, said more than 500,000 people had signed an open letter to the AfD, rejecting the party’s “xenophobic” and “racist” messages.

The AfD rails against what it calls the “Islamisation of Europe” and denies it is racist.

The government doubled funding for projects aimed at combating right-wing, left-wing and Islamist extremism to over 100 million euros in 2017 alone.

Some credit such policies with keeping support for far-right parties lower than in neighbouring countries.

But Axel Ruppert with the European Network against Racism said the AfD’s aggressive rhetoric was pressing the boundaries of “acceptable” discourse and hate crimes were rising.

The AfD’s entry into parliament has triggered a long-overdue dialogue about what went wrong during the unification of eastern and western Germany in 1990, said Michaela Glaser with the German Youth Institute, a non-profit research association.

“One silver lining … may be that things that were hidden before have become visible. And only if something has been articulated can it be addressed,” she said.