Gaza: India Condemns 'All Violence' But Singles Out 'Rocket Attacks', Not Israeli Airstrikes

The Security Council met to the discuss the ongoing hostilities that have seen 65 Palestinians, including 16 children, killed in Israeli bombings, and three persons killed in Israel by rockets launched by Hamas from Gaza. 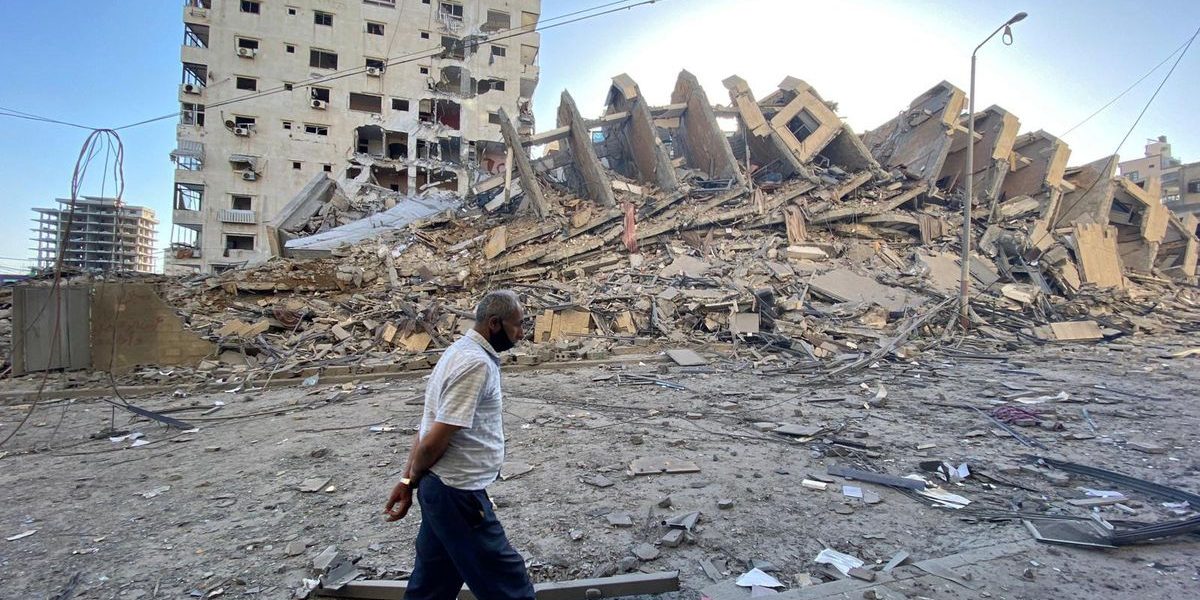 A Palestinian man walks past a tower building which was destroyed in Israeli air strikes, amid a flare-up of Israeli-Palestinian violence, in Gaza City May 12, 2021. REUTERS/Suhaib Salem

New Delhi: India on Wednesday condemned “all acts of violence” but specifically criticised rocket attacks from Gaza, at an emergency closed-door session of the United Nations Security Council called to discuss the ongoing hostilities in Gaza, where Israeli airstrikes have killed 65 Palestinians, including 16 children and five women. The Associated Press reports that there are 86 children among the 365 Palestinians injured since Monday.

Rockets fired by the Hamas militia from Gaza into Israel have killed three persons, including an Indian woman working as a caregiver for an Israeli family in Ashkelon near Tel Aviv,

The 15-member UN Security Council met for the second time in two days to discuss the escalating crisis in a closed-door emergency session, called at the request of Norway, Tunisia and Council president, China.

The Security Council first met on Monday, where member states were briefed by the Secretary-General’s Special Coordinator for the Middle East Peace Process, Tor Wennesland.

There were no official statements released after the morning meeting, but India’s permanent representative to UN, T.S. Tirumurti, circulated the main points of his remarks on social media.

In a tweet, Tirumurti stated that India condemned “all acts of violence, especially rocket attacks from Gaza”.

In today’s #UNSC meeting on events in East #Jerusalem & elsewhere, I mentioned:

The city of East Jerusalem, under Israeli occupation for the past 54 years, had been tense for weeks, but violence broke out five days ago, triggered by attempts to evict Palestinian families living in Sheikh Jarrah and Silwan neighbourhoods. The Israeli attempt to change the demographic composition of what is Palestinian territory led to protest at the Al-Aqsa mosque, where thousands had gathered to pray on the last Friday of the month of Ramzan.

With the Israeli police using strong-armed tactics to break up the protests, more than 220 people, mostly Palestinians, have been injured. The Palestinians retaliated by hurling stones and bottles at the Israeli security personnel, who shot at the crowd with rubber-coated bullets, tear gas and stun grenades. The protest eventually expanded across Jerusalem, West Bank and also in Arab dominated villages in Israel.

This week, the Palestinian militant group, Hamas, which is in control of the Gaza strip, fired rockets towards Occupied Jerusalem, after issuing an ultimatum demanding the withdrawal of Israeli forces from the Temple Mount and Sheikh Jarrah neighbourhood.

Though the rockets caused little or no damage, Israel responded with disproportionate force, launching airstrikes into Gaza that initially killed 20 people, including nine children, as per the Palestinian authorities. The latest casualty figure from Gaza is 65 dead.

At least three people were killed in subsequent rocket attacks launched by Hamas at Tel Aviv and its environs.

During the UNSC meeting, Tirumurti mentioned the “tragic demise” of Soumya Santosh, a 30-year-old native of Kerala, who worked as a caregiver in Ashkelon.

Calling for immediate de-escalation, Tirumurti also urged the two sides to refrain “from changing status-quo”. The use of the term status-quo is a reference to Israel’s attempted eviction of Palestinian families in East Jerusalem, officials confirmed.

At the Council meeting on Monday, Tirumurti had said that India was “deeply concerned” at the violence at the Temple Mount complex. He also added that India was “equally concerned about evictions in Sheikh Jarrah & Silwan neighbourhoods”. He had also condemned the rocket attack from Gaza.

The Indian ambassador had also reiterated need for all parties to adhere to UNSC resolution 2334, which calls for advancing negotiations to reach a two-state solution.

As per the last formal discussion in Security Council on the Palestine issue in April, India’s official position is for a “negotiated two-state solution” that “should fulfil Palestinian aspirations for statehood and sovereignty, meet Israel’s security needs, and resolve all final status issues.”

As the exchange of fire between Hamas and Israel continued, UN envoy Tor Wenneland warned that there was danger of “full scale war”. “Leaders on all sides have to take the responsibility of de-escalation. The cost of war in Gaza is devastating and is being paid by ordinary people. The UN is working with all sides to restore calm. Stop the violence now,” he posted on his official Twitter account.

Reuters reported on Tuesday that the Security Council delayed the issuance of a public statement on the situation, after the US felt that “it could be harmful to behind-the-scenes efforts to end the violence”.

The United States has asserted that Israel had a right to self-defence from Hamas rocket attacks, which Secretary of State Anthony Blinken reiterated in a phone call with Israeli Prime Minister Benjamin Netanyahu. He added that “Palestinians need to be able to live in safety and security”.