At G20, Ivanka Trump Takes the Spotlight – and a Seat

Ivanka Trump helped launch a loan programme for women at the summit and caused a stir by briefly occupying her dad's seat at the table with world leaders. 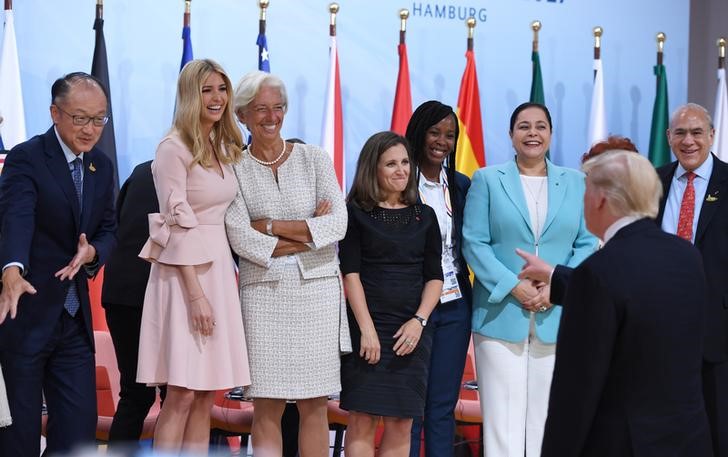 Hamburg: US President Donald Trump shared the G20 spotlight on Saturday with his daughter and adviser Ivanka Trump, as she helped launch a loan programme for women and caused a stir by briefly occupying her dad’s seat at the table with world leaders.

Ivanka, who ran an eponymous clothing and jewellery business before taking a formal job at the White House, has made women’s issues one of her signature policy areas, and the G20 revealed the power she wields as a trusted confidante to the president.

The World Bank used the occasion to launch a public-private loan programme aimed at providing over $1 billion to support women entrepreneurs in developing countries, a project Ivanka first initiated just five months ago.

“This is not a cute little project,” World Bank President Jim Yong Kim said at the kick-off, attended by six of the 20 world leaders at the summit, plus leaders from other donor countries and IMF managing director Christine Lagarde.

“This is going to be a major driver of economic growth in the future … and it’s going to drive gender equality at the same time,” Kim said.

He underscored the importance of having a “champion” like Ivanka to galvanise action on an important issue.

Later, as leaders met behind closed doors, Ivanka briefly sat in her father’s chair during a session on African development, as the World Bank president spoke.

Her appearance triggered a flurry of tweets and caught the attention of mass-circulation daily Bild, which carried a photograph of her on its website with the headline: “Trump’s replacement: Ivanka Trump suddenly appears at negotiating table.”

German Chancellor Angela Merkel, who has worked with Ivanka on related issues, dismissed the kerfuffle at a news conference after the G20 summit ended.

“The delegations decide who will sit at the table if the president isn’t there, which can happen from time to time. And Ivanka belongs to the US delegation,” Merkel said, noting other delegations do the same thing.

“It’s well known that she works in the White House and is responsible for several initiatives,” Merkel said.

The World Bank said the fund for women entrepreneurs had attracted $325 million from donors including Germany, the US, Saudi Arabia and the United Arab Emirates, and would be matched by hundreds of millions of dollars in additional private capital.

The programme, which aims to start awarding loans before year end, will work with governments “to improve laws and regulations that are stifling women entrepreneurs” and push banks to free up funds for female-owned businesses.

It will also create an online mentoring tool to match women business owners in developing countries with advisers such as Ivanka Trump, Kim said.

As for Trump, he told leaders at the World Bank event that he was very proud of Ivanka.

“A champion. She’s a champion. If she weren’t my daughter, it would be so much easier for her,” Trump said, drawing laughter.

“Might be the only bad thing she has going, if you want to know the truth,” he said.