The European Commission launched legal action on Saturday against what it sees as Polish government attempts to undermine the independence of judges. 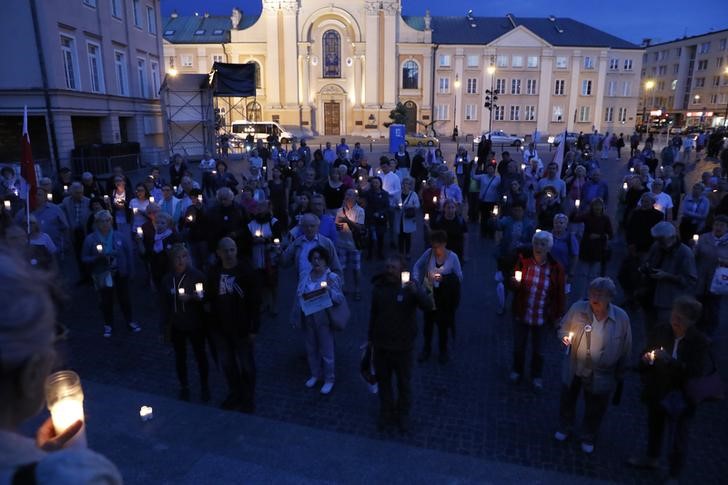 People attend a protest against judicial reforms in front of the Supreme Court in Warsaw, Poland, July 27, 2017. Credit: Reuters/Kacper Pempel

Brussels: The European Commission launched legal action on Saturday against what it sees as Polish government attempts to undermine the independence of judges.

It has given Warsaw a month to respond.

EU commissioners decided to launch the “infringement procedure” for violating EU law at a meeting on Wednesday, the first step in a legal process that may end at the bloc’s top court, pending publication of Poland‘s new law.

A Polish deputy foreign minister said on Saturday the Commission’s decision was “unjustified” because the organisation of the legal systems in EU members was up to member states and not EUinstitutions.

The Commission is concerned about discretionary power given to Poland‘s minister of justice to prolong the mandates of judges who reach retirement age, as well as to dismiss and appoint court presidents.

“The new rules allow the minister of justice to exert influence on individual ordinary judges through, in particular, the vague criteria for the prolongation of their mandates thereby undermining the principle of irremovability of judges,” the European Commission said in a statement on Saturday.

Polish President Andrzej Duda on Tuesday signed into law the bill on ordinary courts, but, in a move welcomed by Brussels, blocked two other bills that would have empowered the government and parliament to replace Supreme Court judges.

Poland‘s eurosceptic, nationalist government has rejected Brussels’ objections as “blackmail” and as unjustified criticism, but has said Warsaw is open to talks to resolve the dispute.

Commission First Vice President Frans Timmermans sent a letter on Friday to Poland‘s foreign minister reiterating an invitation to him and the justice minister to meet in Brussels to relaunch dialogue.

He had said on Wednesday that the Commission could trigger Article 7, a legal process of suspending Poland‘s EU voting rights, if Warsaw went ahead with plans to undermine the independence of the judiciary and the rule of law.

The European Commission has given Poland a month to respond to concerns for the rule of law raised by the EU executive in an unprecedented process launched last year.