The arbitral tribunal decided that Italy will conduct the criminal proceedings of the two marines accused of shooting at Indian fishermen.

New Delhi: Eight years after Indian police arrested two Italian marines, a five-member international tribunal rejected India’s contention that the soldiers, who were accused of killing Indian fishermen, could be tried in Indian courts and ordered India to cease all criminal proceedings against them.

On Thursday, the Hague-based Permanent Court of Arbitration published an extract of the final award of the ad-hoc tribunal constituted to settle disputes related to the United Nations Convention for the Law of the Sea (UNCLOS).

Citing UNCLOS, Italy took India to the International Tribunal of the Law of the Seas in Hamburg in 2015. From there, the matter went to the Arbitral Tribunal where bith countries made detailed pleadings.

According to the extract, the five-bench Arbitral Tribunal decided that the, “Marines are entitled to immunity in relation to the acts that they committed during the incident of 15 February 2012, and that India is precluded from exercising its jurisdiction over the Marines”.

Further, the tribunal ordered that “taking note of the commitment expressed by Italy during the proceedings to resume its criminal investigation into the events of 15 February 2012, that India must take the necessary steps to cease to exercise its criminal jurisdiction over the Marines, and that no other remedies are required”.

Both these decision were passed three to two, with the negative votes cast by India’s P.S. Rao and Patrick Robinson of Jamaica. The other three members were Italy’s Professor Francesco Francioni, South Korea’s Jin-Hyun Paik Korea and Russia’s Vladimir Golitsyn as the president of the Tribunal.

Despite the setback on the question of prosecution, the first response from the Indian Ministry of External Affairs was to emphasise that the tribunal had “upheld the conduct of the Indian authorities with respect to the incident under the provisions of the UNCLOS”.

“It held that the actions of the Italian military officers and, consequently, Italy breached India’s freedom of navigation under UNCLOS Article 87(1)(a) and 90,” said MEA spokesperson Anurag Srivastava.

He then turned to the issue of jurisdiction to first claim that the tribunal had observed India and Italy “had concurrent jurisdiction over the incident and a valid legal basis to institute criminal proceedings against the Marines”.

The MEA was referring to the Tribunal’s order that India had not violated provisions of UNCLOS relating to freedom of navigation on the high seas, status of ships, penal jurisdiction in matters of dispute, and cooperation for repression of piracy.

However, the tribunal had also not accepted any of India’s counter-claims against Italy about jurisdiction and rights of a coastal state over its exclusive economic zone. The tribunal also did not accept that Italy had violated India’s freedom and right of navigation under articles 87 and 90 of UNCLOS.

The MEA, however, admitted that the Tribunal found that “immunities enjoyed by the Marines as State officials operate as an exception to the jurisdiction of the Indian courts and, hence, preclude them to judge the Marines”.

The tribunal also decided that India is entitled for payment of compensation in connection with loss of life, physical harm, material damage to property and moral harm suffered by captain and crew of ‘St Antony’, the Indian vessel.

“India has taken note of the Award and will be in touch with relevant entities on the matter and regulatory framework established by the Government,” he said.

The Italian government’s press statement noted that Tribunal had been asked to rule on “the allocation of criminal jurisdiction” and not on the merits of the incident of firing.

“The Ministry wishes to emphasize that the Award of the Tribunal does not make any determination of criminal responsibility in connection with the incident, which it will now be for the Italian judicial authorities alone to ascertain,” said the press release of the Italian ministry of foreign affairs.

On February 15, 2012, Indian police had contended that Massimiliano Latorre and Salvatore Girone, two Italian marines posted on oil tanker Enrica Lexie, shot at two Indian fishermen on an Indian vessel, apparently mistaking them for pirates operating near the Kerala Coast. 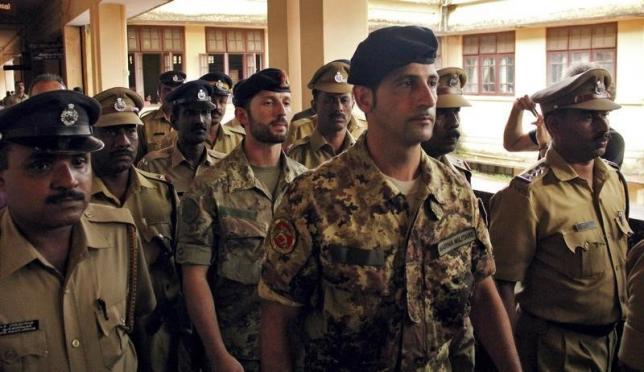 After three years, Italy moved ITLOS seeking for Latorre and Girone to stay in their own country during the trial process and also to stop India from going ahead with its criminal prosecution.

At that time, India had set up a specially designated court, as ordered by Indian Supreme Court, to determine the applicability of jurisdiction. India’s National Investigation Agency had already slapped charges against the two Italians under sections of the Indian Penal Code, related to murder, attempt to murder, mischief and common intent.

The ITLOS judgment dated August 24, 2015 called on Italy and India to suspend all domestic prosecutions arising from the Enrica Lexie Case and not to take initiate any steps that “might jeopardize or prejudice the carrying out of any decision which the arbitral tribunal may render”.

According to UNCLOS, disputes can be resolved through four process, one of which was for ad-hoc arbitration as outlined in Annex VII of the convention.

Accordingly, a specially-designated tribunal was constituted with five members on November 6, 2015.

In provisional measures, the tribunal said on April 29, 2016 that Girone could be returned to Italy during the period of the arbitration. Latorre was already in Italy after getting medical leave from Supreme Court following a stroke, a couple of years earlier.

Speaking to The Wire, former MEA legal adviser Narinder Singh said that the key issue during the bilateral discussions between Italy and India had been about immunity from prosecution for the Italian marines. “UNCLOS speaks of immunity in case of warships and government controlled vessels, but it had remained silent on the issue of government personnel stations aboard private commercial vessels for anti-piracy operations,” he said.

This was also pointed out in the written observations submitted by India in February 2016 on Italy’s request for provisional measures:

“In the first place, the question of the Marines’ alleged immunity is a question for the merits, which should not be pre-judged by a request for provisional measures. Section III below will elaborate on this point. Moreover, neither Article 95 of the Convention dealing with the immunity of warships on the high seas, nor Article 96 dealing with the immunity of ships owned and operated by a State and used only on government, non-commercial service, have any relevance. The Enrica Lexie was a commercial oil tanker that was not operated by Italy and not engaged on government service. UNCLOS says nothing about any immunities for marines stationed on such a vessel.”

In the opening statement by India at the oral hearings in July 2019, India’s agent, MEA joint secretary (western Europe) G. Balasubramanian had said the question before the tribunal was to decide whether there was “any provision granting Italy exclusive jurisdiction in  circumstances where two human beings located on an Indian boat were killed as a result of actions coming from individuals on board a commercial vessel?”

On Wednesday, the arbitral tribunal decided that Indian courts do not have jurisdiction and Italy will conduct the criminal proceedings of the two marines.

Italy had also disputed that the matter didn’t come under jurisdiction of India as the incident didn’t come under territorial waters of India. “For India, the issue was not whether the incident took place in high seas or territorial waters. Since the crime took place on an Indian flagged vessel, India believed that the provisions of Indian penal code was applicable”.

Narinder Singh told The Wire that that Arbitral Tribunal’s order which accepted Italy’s argument that the marines have immunity as “state officials” has high significance for the shipping industry. “The private shipping industry would be very happy with this verdict, as the stationing of state personnel for anti-piracy operations aboard private vessels had been a legal grey zone”.

He noted that the sole ‘positive’ point in the judgement is for India in the order was that Italy has been ordered compensation for breaching two provisions of the UN Convention. The order calls on both countries “to consult with each other with a view to reaching agreement on the amount of compensation due to India”.

Due to the Italian marines case, relations between India and Italy had been frozen for several years.

In March 2015, India-EU summit had been called off after Brussels did not react fast enough to New Delhi’s proposal for dates. Earlier that year, EU’s foreign policy chief, Federica Mogherini, a former Italian foreign minister, had told the European parliament that it was “good for everyone to be fully aware of how much of an impact the unresolved dispute of the two Italian Navy officials can have on relations between the EU and India”.

At the meeting of the Missile Technology Control Regime at Rotterdam in October 2015, Italy had blocked India’s entrance to the export control group, raising objections that India was not a member of NPT. It was seen largely as a fallout of the bilateral friction over the Italian marines, with India joining the MTCR next year in June 2016.