Lahore: Elegy for a City that is Perpetually on Edge

All public spaces across Pakistan are under threat. I have a meeting to hold today; as I debate which part of Lahore may be safer to conduct it in, I wonder if there is any safe space left. 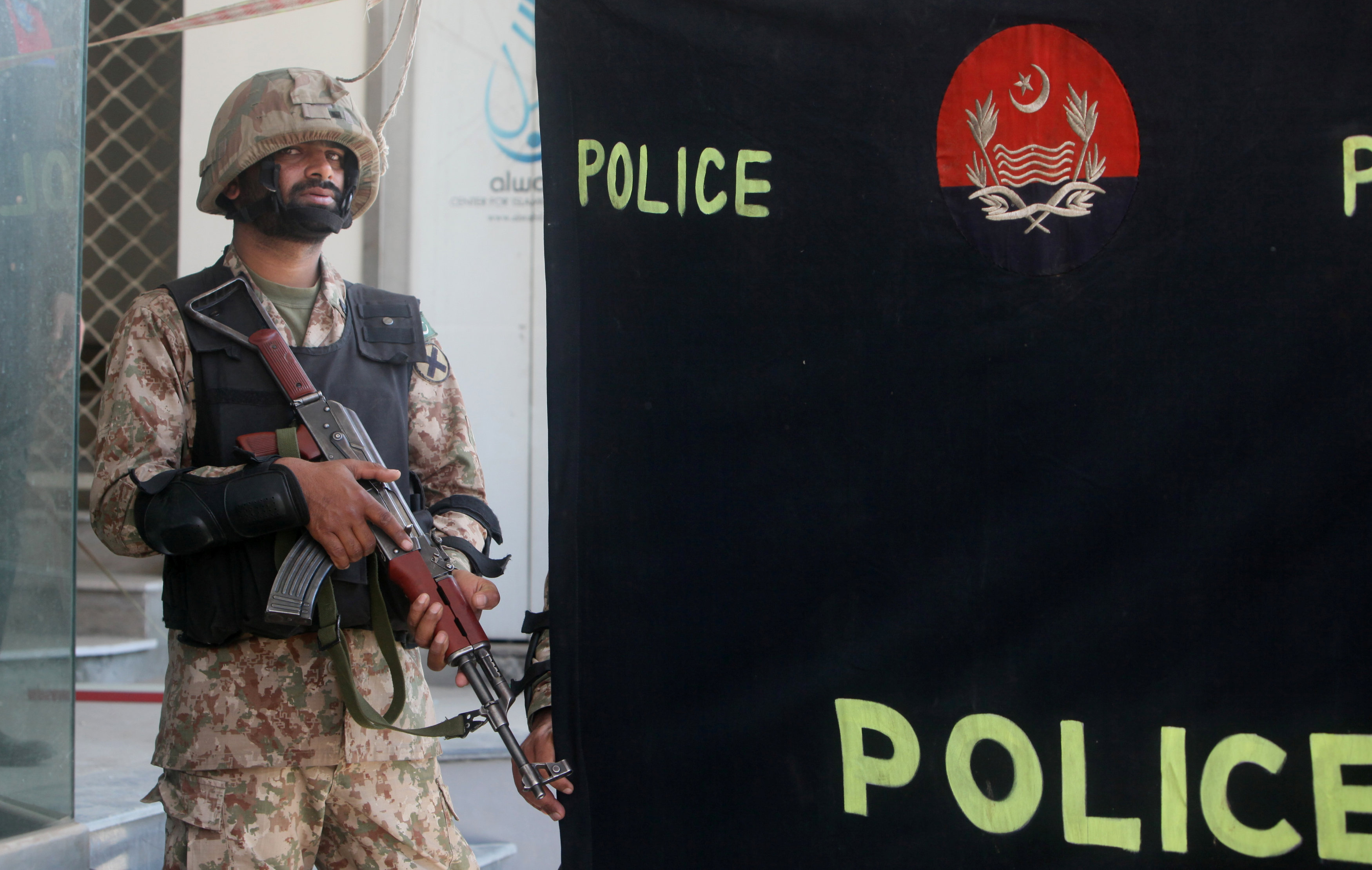 A soldier stands guard at the police screen as investigators collect evidence at the scene of a blast in a upscale neighborhood in Lahore, Pakistan February 23, 2017. Credit: REUTERS/Mohsin Raza

Lahore: What happens when the spaces where you spent your childhood are ravaged? What happens when one by one every place deeply entrenched in your memory is bloodied? What happens when slowly any semblance of being carefree is snatched away and one is always, always guarded? When parks and restaurants no longer serve as spaces to have conversations, to meet people, to play and be merry, but rather as strategic avenues to kill more and more people? When schools become targets, girls are shot and blasts rip through playgrounds? When cultural activities are curbed, when sports are no longer played, when no one goes to movie theatres, when evenings are spent inside and children are kept away from public spaces? What happens when one is always exposed and vulnerable? When violence becomes a constant companion? What happens to the people of that country?

Ten people died and at least 30 were wounded when an explosion tore through Lahore’s posh Defence Y block market on Thursday. The market is full of upscale international chains like Gloria Jeans, Cup and Toni&Guy as well as local banks, grocery stores and clothing outlets. The elite often spend their mornings sipping coffee, socialising, holding work meetings and shopping, while many from the working class make their way into the market to not only serve as employees in these cafes, banks and stores but often to also run errands for their employers. Initially built for army officers, ‘Defence’ today is home to some of the wealthiest families in Pakistan. But it isn’t just the upper class that would become targets of any attacks in ‘Defence’; it is also the drivers, the waiters, the cleaners and other hardworking labourers who become causalities. An attack there is not just an attack on a socioeconomic group but on Pakistan as a nation. It is also significant to note that Defence Housing Authority, or DHA, has traditionally been considered one of the safest localities to reside in. The very idea that terrorists could strike here shows the inroads they have made.

In the past 24 hours, there have been many theories about the incident. The government initially said a generator had exploded. Others claimed that explosive material had been stored in a building which resulting in the deaths. Whilst still other police officials confirmed that it was a bomb blast. By the evening it seemed certain that the attack indeed was a terrorist act. Now news has come in that the explosion of a gas cylinder caused the causalities and damage. Yet, it is clear that the state too expected that terrorists could have launched an attack in a central place like DHA; thus the confusion and uncertainty, thus the conflicting accounts and contradictory official statements.

The fact that it may not have been a terrorist attack doesn’t do much to eliminate the sense of insecurity that people feel for Lahore, the cultural capital of Pakistan, has been hit several times by terrorists. The city is often referred to as the heart of the artistic and literary community. As the seat of the Mughal and Sikh Empire, Lahore has historically held a unique standing in the country. It is not the capital, but even today it is often treated as one, both politically and culturally. The city has produced some of the most celebrated writers, poets, musicians, actors, sportsmen and artists. It has been the hub of cultural activities. It is perhaps this aspect of the city that has increasingly been targeted. There is a clear attempt to suffocate cultural practices, to tighten the noose and suck the life out of the city. The attempt has been ongoing for a while now.

In 2010, suicide bombers blew themselves up at the famous Sufi shrine of Data Darbar in Lahore, where thousands flock every day. At least 37 people were killed and dozens more were wounded. Data Ganj Bakhsh is one of the most revered saints and his shrine is one of the oldest in the country. Those who struck the shrine knew they would rip through the hearts of millions of devotees. Twice, in 2008 and 2010, Pakistan’s leading Lahore based theatre group, Rafi Peer Theatre also came under attack, once at it’s packed annual festival and then at its café and puppetry museum. The group has been promoting the performing arts since the 1970s. After the 2008 attack however, Rafi Peer stopped hosting its most popular event, the World Performing Arts Festival, which included theatre, dance, puppetry and music performances as well as films from around the world. They feared causalities, both of local and foreign artists as well as thousands of attendees. It was only last year, in 2016, that the festival returned to the city. For eight long years, one of the most vibrant cultural activities in the country had been gagged. 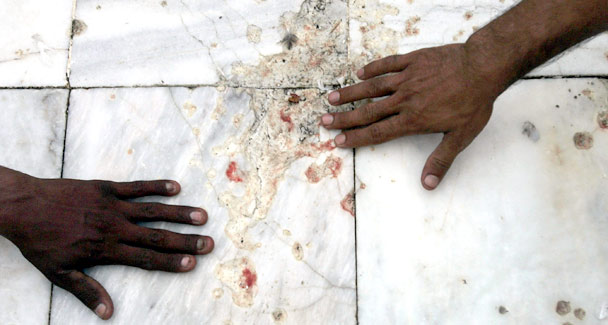 In 2009, the Sri Lankan national cricket team was attacked in Lahore.  In the decade after the city had hosted the 1996 World Cup final, the landscape had entirely changed. No foreign team – with the exception of Zimbabwe, that too after six long years – has been willing to play cricket in Pakistan. 2017 was meant to mark the year that would put an end to this isolation. The country has invited foreign cricketers to play in the Pakistan Super League in Lahore this March. The Pakistan Cricket Board hoped that this would serve as proof that Lahore had once again become safe for international sportsmen. But the attack at Charing Cross in Lahore last week and yesterday’s events have proved the opposite. The Sydney Morning Herald has just published an article titled, “Would you play cricket in Lahore?” The headline captures the uncertainty the players face, and that Pakistan as a nation faces. Who wants to engage with the country while she scrambles to find a moment of peace and tranquility amidst the bloodshed? Only time will tell.

In 2016, over 70 people were killed and more than 300 injured on Easter Sunday when terrorists attacked one of the largest and most populated parks in the city, Gulshan-e-Iqbal. As children rode the swings and parents stretched their legs, a suicide bomber blew himself up, shredding with him all notions of carefree childsplay, safety and normalcy. The park where I had also spent many of my childhood weekends had become a killing field. The one place where all Pakistanis could go and enjoy an evening, regardless of social class, ethnicity, gender or religious affiliation, had been snatched away too.  Parks, which are meant to serve as recreational spaces for adults and children alike, have also become violent battlefields. What spaces, what places are left to go to now? What spaces, what places are still safe? Perhaps it is just a matter of luck and coincidence now – where you happen to be and where you don’t happen to be. The people who died in the DHA explosion yesterday just happened to be there, for meetings, for work, for chitter chatter. Wrong time, wrong place. Are there any right places left to go to?

In 2013, a new and immensely popular event had been introduced to the city: The Lahore Literary Festival. Every year since, it is has brought together some of the finest writers from around the world. This weekend, it had planned full three-day sessions, allowing readers and writers to connect, to engage in discourse, to debate and to learn. The three-day event now has to be squeezed into a two-day event, limited to lectures and discussions. The venue has had to be changed. Those who haven’t boarded their flights have been told not to come. The city cannot ensure their safety. Go away, go away, save yourself from this utter madness. But where do those go who have nowhere else to go? For whom Lahore is their heartbeat, for whom there is no other home, can be no other abode?

Pakistan’s people, Pakistan’s schools, Pakistan’s parks, Pakistan’s mazars and churches, its cultural platforms, are all under attack. Operations are being launched, terrorists are being targeted but it is almost like the monster is no longer in anyone’s control. The resulting helplessness was perhaps most evident in yesterday’s events. Immediately, as news trickled in regarding the incident, the Punjab Government took to its official Twitter account and aIS that it was only a generator explosion and that the public should remain calm. Eye-witness accounts suggested what had happened was anything but that. The damage had been too severe. People were posting pictures of dead bodies strewn on the streets, of broken car windshields and damaged office buildings. More and more people were reported dead. How could a generator cause so much damage?

The government, perhaps in the hope of avoiding panic in the public, thought it might be better to call it anything but a terrorist attack; this was in all probability before  any investigation had even taken place. The lack of coordination, the false information ended up creating only more panic. If the Punjab government could be tweeting without evidence, then what stopped others? Soon messages were sent across that other parts of Lahore were also under attack and that shoot on sight orders had been given. Those who couldn’t get through to their relatives and friends were terrified. My hands too shook as I tried to reach out to my own family members and friends. No one knew what was true, what wasn’t. Utter chaos took over the city. It showed that perhaps no one really was in control anymore and that this chaos too was just the new normal. While Punjab Law Minister, Rana Sanaullah has now once again confirmed that the blast was a cylinder explosion, the fact that other official sources had said that it was a bomb makes the situation all the more confusing. If the government, police and expert agencies are so unclear, how is the public supposed to feel secure?

The school I teach at is closed today. It is too unsafe to call students in light of the terrorist attacks across the country over the past few weeks. Messages are being circulated strictly advising people not to go to any crowded places. “Stay at home,” they instruct. All public spaces across the country are under threat. I have a meeting to hold today; as I debate over which part of the city may be safer to conduct it in, I again wonder if there is any safe space left. Maybe it really is about hoping against hope that one is not at the wrong place at the wrong time. For the truth is that there are no right places left.