The quake hit offshore at 4:18 am local time at a depth of around 36 km, the US Geological Survey said. 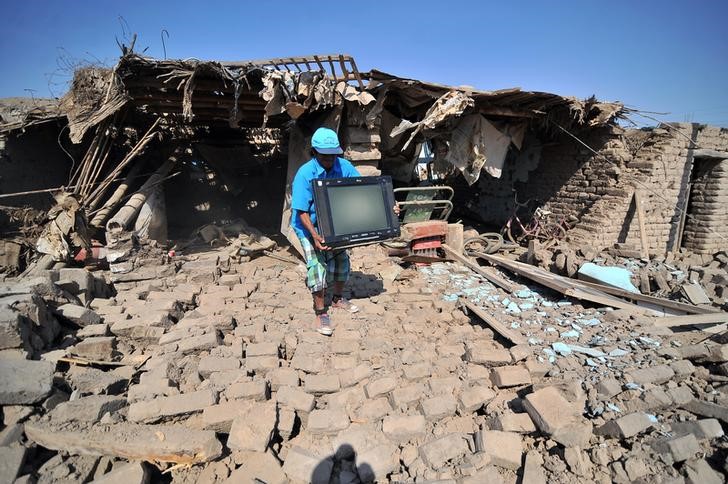 A man passes the debris of a building after a strong magnitude 7.1 earthquake struck the coast of southern Peru, in Acari, Arequipa , Peru, January 14, 2018. REUTERS/Diego Ramos

Lima: A strong magnitude 7.1 earthquake struck the coast of southern Peru on Sunday morning, killing one person, injuring scores and causing homes and roads to collapse.

Arequipa governor Yamila Osorio said on Twitter that a 55-year-old man died in the town of Yauca after being crushed by rocks. Jorge Chavez, chief of Peru‘s Civil Defense Institute, told local radio station RPP that 65 people were injured.

Several municipalities lost electricity, and many roads and adobe houses collapsed, Osorio said. Many residents of Lomas, a coastal town, were evacuated after feeling an aftershock.

President Pedro Pablo Kuczynski traveled to the towns of Chala and Acari, two of the areas most affected by the quake, to assess the damages and coordinate the response. He said some 100 houses had collapsed.

“We are going to send everything that is needed, such as tents for people whose homes were destroyed,” Kuczynski told reporters in Chala.

Earthquakes are common in Peru, but many homes are built with precarious materials that cannot withstand the tremors.

In 2007 an earthquake killed hundreds in the region of Ica.

Prime Minister Mercedes Araoz said at a news conference in Lima that the government would declare a state of emergency in the affected zones to allow for faster reconstruction of roads and homes. Devastating floods last year resulted in $8 billion in rebuilding costs.

Peruvian maritime authorities said the quake did not produce a tsunami on the coast. In the morning, officials said a second person had died and that 17 people were missing in a mine, but later withdrew the reports.

Peru is the world’s second largest copper producer, although many mines in the south are located far inland from the quake’s epicenter. A Southern Copper Corp representative said there were no reports of damage at its Cuajone and Toquepala mines.

Jesus Revilla, a union leader at the Cerro Verde copper mine in Arequipa, said there were no reports that operations had been affected.

The quake was also felt in northern Chile, Peru‘s southern neighbour, but authorities said there was no tsunami risk.