Despite Trump’s Threats to Iran, India Must Push Ahead on Chabahar

There is limited interest to 'tear up' the Iranian nuclear deal in Washington. Even as New Delhi monitors these moves closely, it should consider a coordinated approach with Asian partners who continue to engage with Iran. 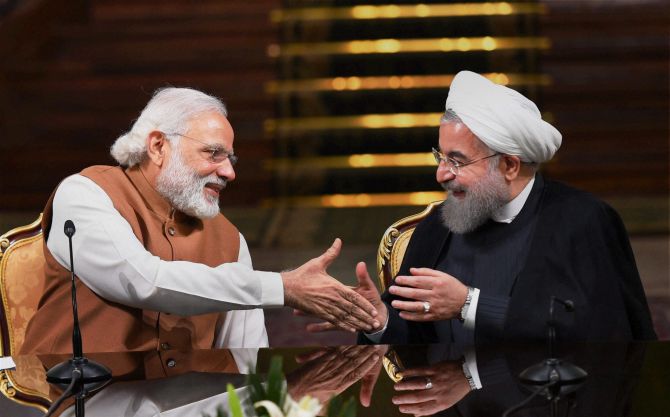 The Trump administration’s recent move to sanction dozens of Iranian entities has raised concerns in India, specifically over the future of the Chabahar port project. These apprehensions are justified given the strategic significance of the southern Iranian port, which will enable India to bypass Pakistan and gain direct access to Afghanistan, Central Asia and Europe.

This proposal has taken over a decade to materialise and any move by the new US government to discourage economic engagement with Iran would throw a spanner in the works.

Therefore, it would be in New Delhi’s best interests to safeguard its proposed investments in Chabahar and convey to Washington that Iran’s most important strategic and economic partners – including Russia, China, Japan and South Korea – would not like to see the Iranian nuclear deal unravel.

Despite his Twitter rhetoric, Trump’s new sanctions against Iran are not exactly new. This policy is in line with that of the Obama administration to keep a strict check on Iran’s behaviour through non-nuclear sanctions even after the nuclear deal.

Non-nuclear sanctions include those against Iranian or related entities and individuals who support terrorism, human rights violations and, as in the latest case, the country’s ballistic missiles programme. They are separate from the sanctions that were lifted as per the Iranian nuclear deal, the future of which is undoubtedly of great concern today.

The Iranian nuclear deal, or the Joint Comprehensive Plan of Action, reached in 2015, was negotiated between Iran and the P5+1 countries – the US, Russia, China, the UK, France and Germany – and was facilitated by the European Union (EU). The Trump administration has repeatedly indicated that it plans to force the Iranians back to the table to renegotiate “the worst deal ever negotiated”.

However, there is zero appetite for renegotiations. The EU’s Vice President Federica Mogherini, who coordinates the joint commission that implements the deal, has confirmed as much and so has Iran’s President Hasan Rouhani, who labelled such talks “meaningless”.

The Russians find such a move “risky” and have advised Trump to “not try to fix what is not broken”. The British, while raising concerns over Iran’s behaviour, have opined that the deal be properly enforced and policed. And finally, China has interestingly been the loudest on this matter since it was hit by the latest US unilateral sanctions (three Chinese companies and three Chinese individuals were on the list). Beijing has now warned the US that such moves “will not help in enhancing trust.”

More importantly, there is very little appetite to return to the past scenario of multilateral economic sanctions against Iran. This realisation seems to have dawned on the Republican camp and, if shared across the administration, would prove helpful in preserving the deal.

Paul Ryan, the speaker of the US House of Representatives, has stated that the deal is very likely to stay in place, “I don’t think you’re going to go back and reconstitute the multilateral sanctions that were put in place.” Trump also appears to now be talking about “rigorously enforcing the deal.” In a recent interview, when he was specifically asked whether he would tear up the deal, he remained non-committal.

On red flags and a coordinated approach

This brings us to how New Delhi could prepare and proceed on the matter. What red flags should the Modi government watch out for and in what ways can it safeguard India’s proposed investments in Iran going forward?

New Delhi should specifically look for announcements from the US Treasury targeting the Iranian port operator Aria Banader Iranian Co., which has partnered with Indian Ports Global Pvt. Ltd. to develop the Chabahar port.

This private company, according to Iran’s Ports and Maritime Organisation, currently also operates a terminal in the Anzali port facing the Caspian Sea.

In the past, a port operating company, Tidewater, believed to be functioning in Bandar Abbas and owned by Iran’s Islamic Revolutionary Guard Corps (IRGC), was blacklisted in 2011, making it difficult to conduct trade through the port. The company remains in the list but the secondary sanctions on Bandar Abbas have been lifted as per the nuclear deal.

If Aria Banader was found to have linkages with the IRGC – which is unavoidably deeply engaged in Iran’s key sectors – or other blacklisted individuals by Washington, it would be highly problematic for India. This could indeed have been one of the reasons that upset New Delhi when the Iranian government failed to mention they had leased the port to the private firm at the signing of the MoU in 2015. It meant spending additional time on the due diligence and vetting of its new business partner in Chabahar.

A second proposition for the Modi government to consider is widening consultations with Asian partners who have invested or are considering investments in Iran, specifically in Chabahar. New Delhi is already working with Japan on this matter and should consider including South Korea as well.

Japanese Prime Minister Shinzo Abe was one of the first world leaders to call on Trump in November when he won the presidential election, and last week met him again to shore up the Japan-US alliance. It was also within these same months that the Japanese deputy foreign minister announced in Kabul that the country had reached an agreement with New Delhi to expand the Chabahar port in Iran and promised to help boost Afghan trade in the region. This could indicate that the Japanese have taken this calculated decision to proceed with investments in Iran after having consulted or engaged on the subject in some form or fashion with Washington.

Last year, the South Korean steelmaker POSCO agreed to jointly build a steel plant in Chabahar’s Free Trade Zoneand use it as a springboard to more investments in Iran. Other Korean companies have also signed MoUs on electricity-generation and desalination plants in the coastal city.

Joint consultations with Japan and South Korea, who are also US allies, are increasingly becoming the need of the hour as Iran and the US indulge in escalation.

Here’s why – the US and Iran are no longer talking to each other. They are back to talking at each other.

This is a significant change – or perhaps, a return to the status quo – going forward. The direct and functional channel of communication that existed between former US Secretary of State John Kerry, Iranian foreign minister Javad Zarif and their teams looks difficult to replicate with the Trump administration.

Trump’s latest moves against Iran won’t unravel the Iranian nuclear deal just yet. And the Modi government’s Budget allocation for the Chabahar port project demonstrates that it aims to move forward on it and is not entirely risk averse. It must, therefore, strategise to ensure its interests in Iran are protected when engaging with it becomes tricky.

Together with Tokyo, Seoul and other like-minded partners, New Delhi can drive home the point in Washington that there is greatly reduced appetite for multilateral sanctions against Iran, which are in clear violation of the nuclear deal. It needs to also underscore the reality that it will be a much harder task to wrestle Iran back into the ‘sanctions box’.

New Delhi cannot afford to stand by mutely while its strategic ambitions come undone for a second time.