Millions of Venezuelans are struggling with shortages and triple-digit inflation in socio-political upheaval that has triggered months of street protests. 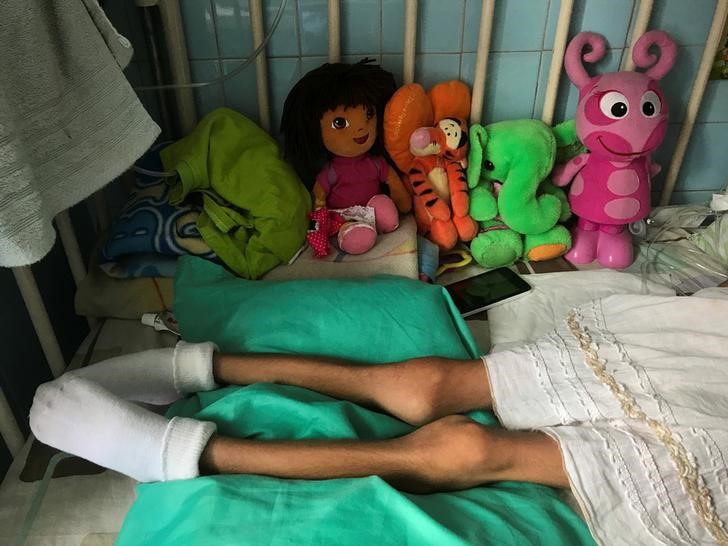 Within two months, he was dead, along with three other youngsters who also developed bacterial infections at the J.M. de los Rios children’s hospital in Caracas.

They were just a few of the many children who have died during a rapidly worsening health crisis in Venezuela, according to doctors, patients, and official and private data.

Millions of Venezuelans are struggling with shortages and triple-digit inflation during political and economic upheaval that has triggered months of street protests where at least 75 people have been killed.

Declining production of oil, a major export, has left the government increasingly short of cash, and lack of everything from food to medical equipment is hitting vulnerable groups like the elderly and children particularly hard.

“Samuel has had chronic renal failure since birth,” said Bront, 53, “He had been receiving dialysis for nine years, and this had never happened.”

A dozen other children have the same infection, which doctors traced back to dialysis machines that were improperly maintained due to lack of resources, according to Belén Arteaga, head of the hospital’s kidney unit.

Surveys conducted in October by Catholic non-profit organization Caritas in poor sectors of Venezuela’s four most populous states found that 48 percent of children younger than 5 were malnourished. By April, that figure had risen to 56 percent.

Those at high risk of death from malnutrition increased to 11.4 percent of the sample from 8 percent in that time, the surveys showed.

Many treatments at J.M. de los Rios are available only because of private donations, according to parents and doctors. Parents routinely clean the rickety rooms, and there is no drinking water.

A survey earlier this year by Venezuela’s opposition-led Congress showed that nine of the country’s 10 main hospitals did not have adequate diagnostic facilities, such as X-ray machines and laboratories, and 64 percent did not offer food to the patients.

Neither Venezuela’s Information Ministry nor the Health Ministry responded to requests for comment.

Of the young patients, infants suffer most.

Last year 31 Venezuelan infants died every day on average. Many were victims of diarrhea, bacterial infections and other diseases that, according to the local pediatric society, could have been prevented or easily treated.

“There are vaccines and antibiotics available, but Venezuela is so lacking that these illnesses are coming back,” said Dr. Huniades Urbina, president of the Venezuelan Society of Childhood and Pediatrics.

Deaths of babies younger than 1 year old jumped 30 percent in Venezuela in 2016, according to government figures. That is a stark contrast to declines across Latin America.

Critics blame the problems on strict currency and price controls that reduce incentives to produce food and restrict imports.

The government says the opposition and Washington are waging an “economic war” against it.

Caritas found that Venezuela’s highest rate of malnutrition was in the La Guajira region of the western state of Zulia, on the arid and volatile Colombian border.

In Caracolito, a tiny settlement of three dirty and crumbling houses containing a total of some 30 people, a woman scavenged for food for her 6-month-old boy at a garbage dump near their home. The child was recovering from a weeks-long stay in a nearby hospital, where he overcame chronic malnutrition.

His brother had died in March from the condition. 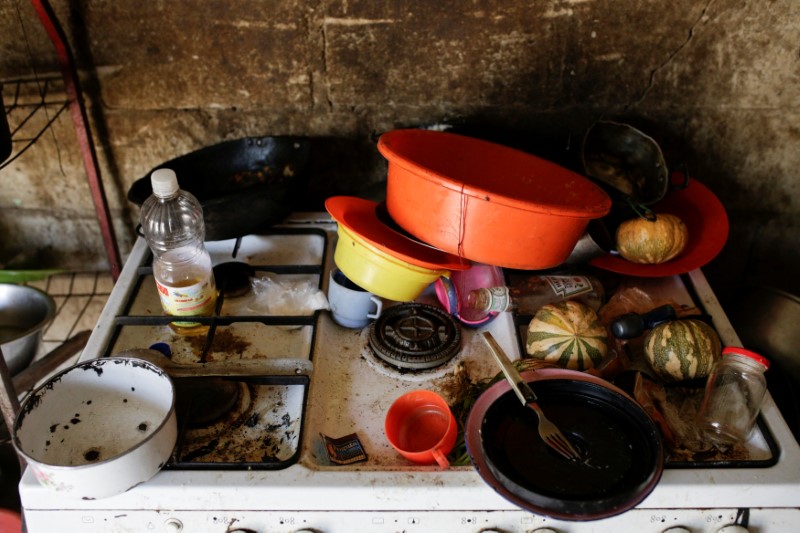 A view of the kitchen of Lideibis Bracho, who was diagnosed with chronic malnutrition, at her hovel in Paraguaipoa, Venezuela March 1, 2017. Credit: Reuters/Marco Bello

“We were told to take vitamins but couldn’t find them,” said their mother, Lideibis Bracho, who is 26 and unemployed. “We went to search in Colombia, but they’re too expensive.”

Susana Raffalli, a nutritional coordinator at Caritas, said the health crisis was catastrophic.

“It’s not normal for you to go to a community, weigh 100 children and have 30 of them close to dying,” Raffalli said.

The government has been slow to publish data, and the previous health minister was fired shortly after the publication of recent infant mortality figures.

Back at the J.M. De Los Rios hospital in Caracas, double the number of children have come in for malnutrition-related issues this year, compared with all of 2016, according to Raffalli.

One mother caressed her son, who was suffering from malnutrition, pneumonia, macrocephaly and a severe lack of calcium.

“He’s nine months old, and he looks like a two-month-old,” said Marisela Huertas, 39. “I was told to give him whole milk, but I can’t find it.”