Crime, Punishment and Reconstruction in Timbuktu 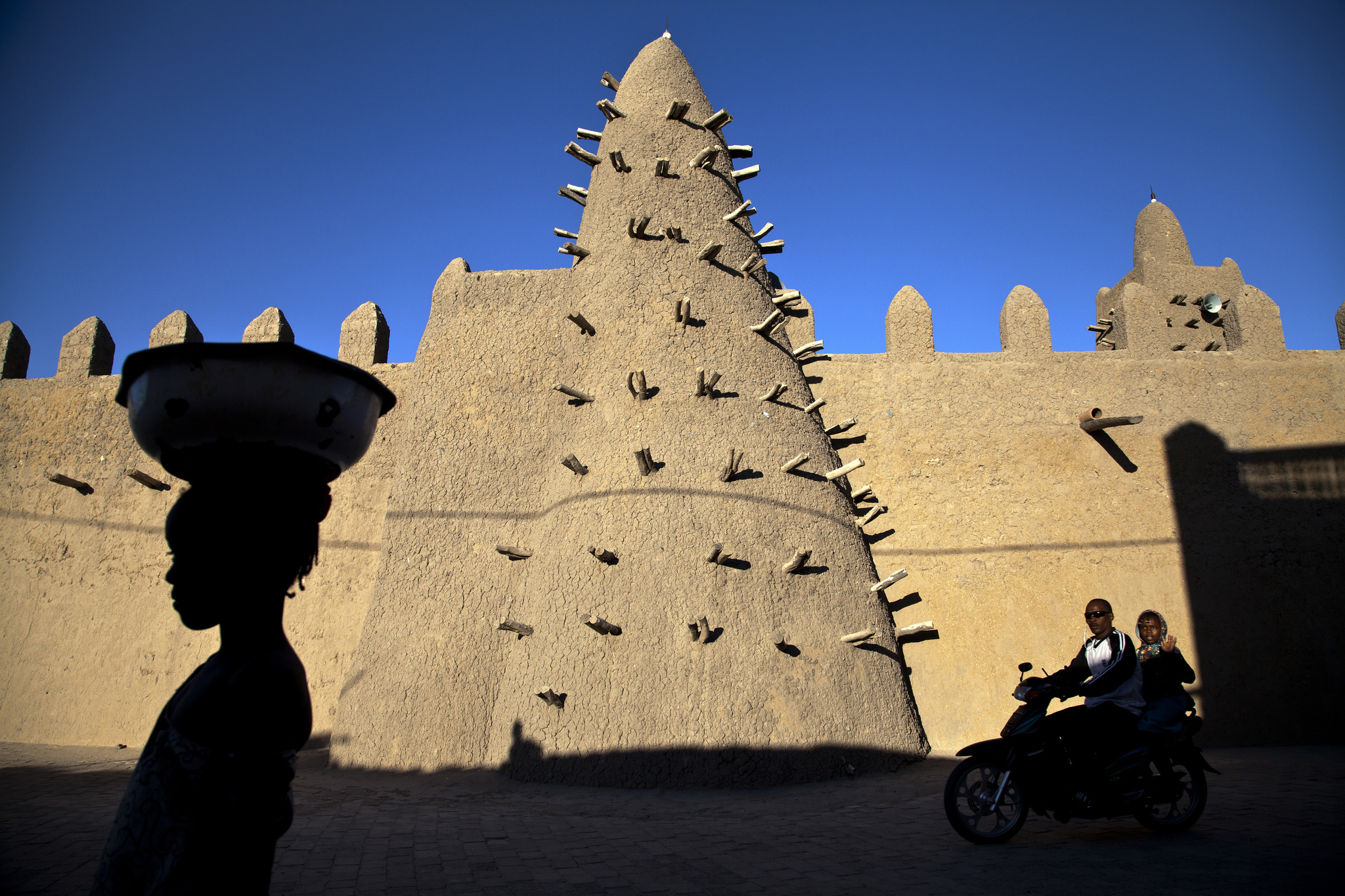 Residents of Timbuktu pass by the Djingareyber Mosque. The mosque is one of the historical architectural structures (along with Sankore Mosque, Sidi Yahia Mosque and sixteen mausoleums and holy public places) which together earned Timbuktu the designation of World Heritage Site by UNESCO. Credit: UN Photo/Marco Dormino

On September 26, 2015 Ahmad Al Faqi Al Mahdi, an alleged member of the Ansar Eddine militia group, was transferred to the International Criminal Court (ICC) to stand trial for the “war crimes of intentionally directing attacks against historic monuments and buildings dedicated to religion” in Timbuktu, Mali in 2012. This marks the first attempt by the ICC to prosecute an individual for the war crime of destroying cultural heritage.

Sadly, the wanton destruction witnessed in Timbuktu is far from being the first or even the most egregious example of a “crime against culture” – a phrase used to describe the destruction of the legendary Afghan Bamiyan statues in 2001. Other infamous examples of cultural destruction in the context of armed conflict include the actions of ISIS in Palmyra and other places, blowing up of the spiral minaret of Samara in Iraq in 2005 as well as the shelling of the Krak des Chevaliers castle in Syria on multiple occasions.

The city of Timbuktu is a UNESCO World Heritage site and UNESCO has been actively involved in rebuilding the destroyed sites as a “symbol of the international community’s continued commitment to rebuilding the region as a whole”. However, the situation in Timbuktu also raises larger questions about the extent to which destroyed cultural sites should be reconstructed.

Why does the destruction of cultural heritage cause so much concern? One answer to that question was given by the Jamaican politician Marcus Garvey: “A people without the knowledge of their past history, origin and culture is like a tree without roots.” Echoing this belief, the ICC prosecutor has said that the demolition of historical buildings was a “callous assault on the dignity and identity of entire populations and their religious and historic roots”.

The destruction of the world’s cultural heritage has been a tragic accompaniment to the relentless march of history. Equally, the preservation of our heritage as an expression of humanity’s shared culture is a relatively new innovation – thus far, cultural sites have mostly survived in spite of human intervention rather than because of it.

The protection of cultural property during armed conflicts indirectly evolved in certain international law treaties framed during the first half of the last century and then substantially developed into the 1954 Hague Convention for the Protection of Cultural Property in the Event of Armed Conflict. The 1954 Convention and subsequent Protocols aimed at protecting cultural property of immeasurable value because of its inherent importance to humanity and obliged the warring parties to respect and safeguard cultural properties. The importance accorded to cultural heritage heightened when the 2002 Rome Statute – which established the International Criminal Court – declared that the destruction of cultural heritage would be considered a war crime.

Other measures by the international community to protect cultural heritage include UNESCO’s World Heritage Convention of 1972 (which designates places of universal value as the UNESCO World Heritage sites), UNESCO’s #Unite4Heritage campaign to protect heritage in areas suffering from violence and the recent UN General Assembly initiative to launch a Task Force to address the destruction and theft of cultural heritage. Residents of Timbuktu pass by the Djingareyber Mosque. The mosque is one of the historical architectural structures (along with Sankore Mosque, Sidi Yahia Mosque and sixteen mausoleums and holy public places) which together earned Timbuktu the designation of World Heritage Site by UNESCO.
Credit: UN Photo/Marco Dormino

The Timbuktu destruction was referred to the ICC by Mali, a state party to the Rome Statute and Al Faqi will be tried for his alleged offences under its provisions. In keeping with the nature of international criminal law, there is thus a strong presumption that the destruction of Timbuktu’s heritage has an “international or transnational element” and has risen “to a level where it constitutes an offence to the world community”.

As the ICC preamble states, the court has jurisdiction over the most serious crimes of concern to the international community as a whole and it is likely to be of significance that the sites destroyed in Timbuktu were UNESCO World Heritage sites.

Interestingly enough, Al Faqi’s trial isn’t entirely unprecedented. Ten years ago, the International Criminal Tribunal for the former Yugoslavia convicted a general of the Yugoslav People’s Army for destruction and wilful damage of cultural property (the Old Square in Dubrovnik) and sentenced him to seven and a half years in prison. The tribunal in that instance too, relied upon the provisions concerning protection of cultural property specified in the statute establishing the tribunal. Moreover, the trial’s significance is heightened in the background of UNESCO’s serious condemnation of armed attacks against cultural property in Yemen and Syria this year. The destruction of cultural heritage, whether deliberately or as “collateral damage” is regrettably common and while the trial might not prevent such attacks it is hoped that it might play a role in deterring such wanton destruction in the future.

To reconstruct or not, that is the question Video grab from AFP’s report on YouTube shows the damage caused to some of Sanaa’s historic homes by Saudi bombing.

When it comes cultural sites, the international community has repeatedly stressed the importance of rebuilding the site in an attempt to wipe out the consequences of the damages and re-establishing the situation that existed prior to the site’s destruction. While UNESCO rebuilt the sites destroyed in Timbuktu with the support of local communities, there are larger questions that remain to be asked about the manner in which reconstruction aims to turn back the clock.

Both the creation and destruction of cultural sites are parts of an organic historical process and are an important testament to the historical record. For example, the gaping holes where the Bamiyan statues once stood are both a poignant reminder of their destruction as well as the ideologies and actions that led to such an event. Would reconstructed statues have the same visceral impact?

On the other hand, rebuilding symbolises a powerful commitment to right wrongs and is a visible symbol of fighting back against hatred and intolerance. Additionally, on a more pragmatic level, cultural heritage sites are often critical for sustaining local livelihood by generating much needed tourist revenue.

While there are no easy answers on the manner in which reconstruction should take place, strong consultation with local communities is critical for any reconstruction effort. Without active local participation and ownership of these sites, any intervention by global bodies, no matter how well intentioned, will remain unwelcome. We also need to consider creative ways of reconstructing these cultural sites in order to highlight their status as symbols of humanity’s potential to both create and destroy.

Al Faqi’s prosecution under international criminal law and the UNESCO reconstruction are both parts of a single process, which asserts the value of our cultural heritage – proving once again that our shared cultural heritage is both global as well as intensely local.

As mentioned previously, in the context of Timbuktu, UNESCO has already rebuilt many of the destroyed buildings with the support and involvement of the local community. For Mali, the reconstruction efforts are seen as an answer to extremists and as a re-assertion of ownership over their country’s rich cultural heritage. Mali’s Minister of Culture put it best when he described the reconstruction in stirring terms – “what matters most is not never fall, but to rise again and this is exactly what this reconstruction represents”.

Shalini Iyengar is a lawyer and Research Associate at the International University College, Turin
Sukrit Rajesh Kapoor is a lawyer and a Consultant at the Commonwealth Human Rights Initiative