Although the number of Latin American countries that have national policies to protect women has increased, high rates of violence against women persist. 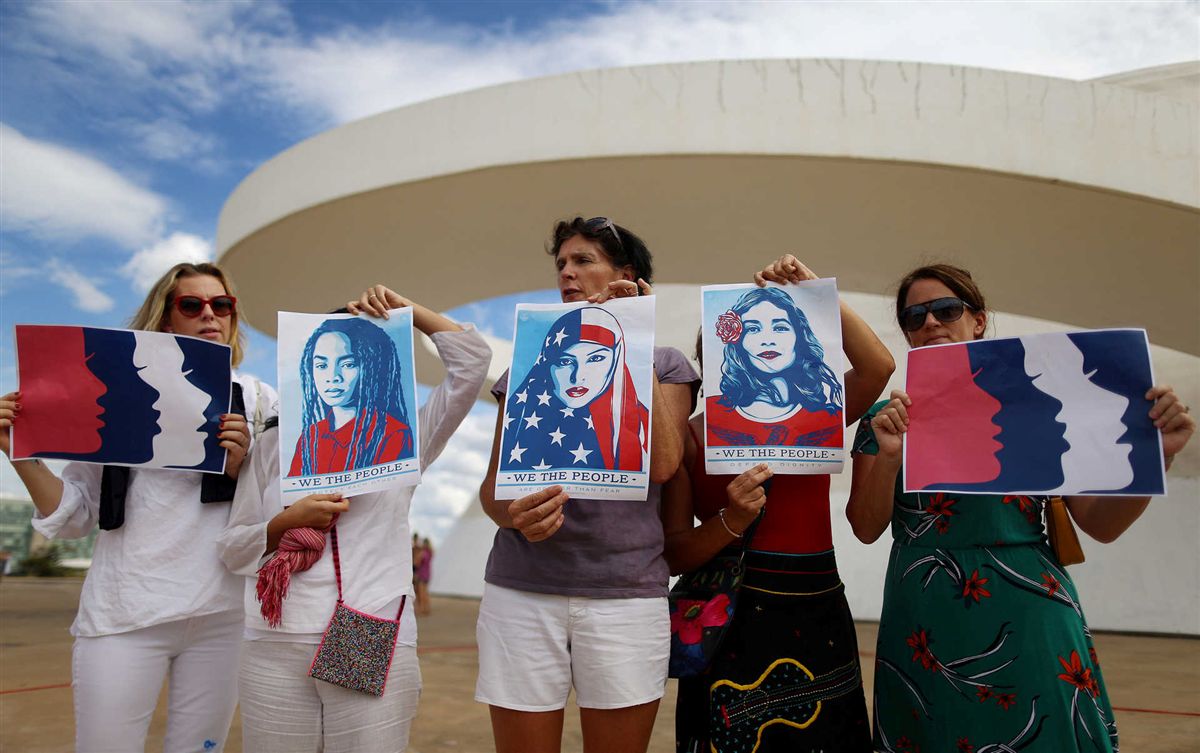 Participants in the Women's March in Brasilia, Brazil. Credit: Reuters 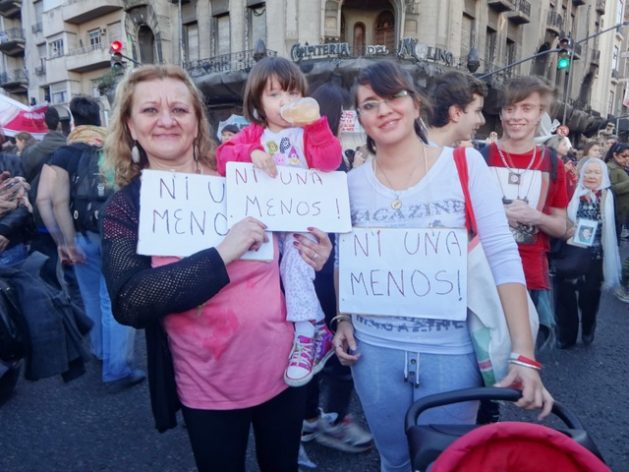 Three generations of women from an Argentine family hold posters with the slogan “Ni Una Menos”, which means “Not one [woman] less”, in one of the demonstrations against femicides in Buenos Aires. Credit: Fabiana Frayssinet / IPS

Buenos Aires: A “conservative and fundamentalist onslaught” in Latin America against a supposed “gender ideology” is jeopardising advances in the fight against violence towards women, feminist activists complain.

Susana Chiarotti, an Argentine lawyer who is a member of the Advisory Council of the Latin American and Caribbean Committee for the Defence of Women’s Rights (Cladem), described this as one of the issues “of concern”, while reflecting on the International Day for the Elimination of Violence against Women, celebrated on November 25.

That day opens 16 Days of Activism against Gender-Based Violence, until Human Rights Day on December 10, led by the campaign “UNiTE”, in which different United Nations agencies participate, whose theme this year is “Leave No One Behind: Ending Violence against Women and Girls.”

“These anti-women’s rights campaigns are not isolated, scattered or erratic. They are well organised, financed and coordinated. Conservative sectors in all countries are connected with each other and share strategies and activities,” Chiarotti told IPS when explaining the scope of the conservative offensive.

Chiarotti, who is also director of the Institute of Gender, Development and Law, said the attack against the supposed “gender ideology”, “is reproduced in the same format” in countries like Argentina, Bolivia, Brazil, Colombia, Dominican Republic, El Salvador, Mexico, Paraguay, Peru or Uruguay.

“In all of them, among other initiatives, they try to eliminate comprehensive sex education or erase gender equality and non-discrimination based on sexual orientation from school curricula, and they oppose women’s autonomy over their bodies by preventing abortions, even legal ones,” she explained.

A report by UN Women and the United Nations Development Programme (UNDP), launched on November 22, underscores that, although in the region the number of countries that have national policies to protect women increased from 24 in 2013 (74%) to 31 in 2016 (94%), the high rates of violence against women remain a serious challenge.

“In spite of the notable advances in national action plans, the region shows the highest rates of violence against women not perpetrated by an intimate partner and the second highest in intimate partner violence,” Chiarotti added.

The report, “From Commitment to Action: Policies to End Violence against Women in Latin America and the Caribbean“, warns that the number of femicides is increasing, and two out of five are the result of domestic violence.

In addition, the report by the UN agencies points out that about 30% of women have been victims of violence by an intimate partner, and 10.7% have suffered sexual violence not perpetrated by a partner.

Participants in the Women’s March in Brasilia, Brazil. Credit: Reuters

For Chiarotti, the number of gender-based murders makes them “practically a genocide, which is also hidden.” If the same number of people were killed for ethnic, religious or other reasons, authorities and people, in general, would react differently, “but there is less sensibility since they are women, unfortunately,” she argued.

“In Brazil they are trying to introduce mediation in the Maria da Penha Law on Domestic and Family Violence“, passed in 2006 and named after a bio-pharmacist who was left paraplegic after she was shot by her husband while she was sleeping, cited the expert, as an example of a setback in terms of gender violence in the region.

In that country, “they have also boycotted the possibility of legal abortion for women who get pregnant as a result of rape,” she said, even though that is one of the exceptions in which it is legal in Brazil to terminate a pregnancy.

“In my country, Argentina, this is being done through a campaign by some sectors, to install ‘probation’ in gender violence proceedings and to use mass conscientious objections to prevent legal abortions,” said Chiarotti.

In Paraguay, conservative groups have launched an offensive against some Education Ministry programmes, using this concept.

“By conceptualising it as an ideology, they take advantage of people’s refusal to be ‘ideologised’ or alienated in a line of thought. But gender is a category of analysis to study reality, not an ideology,” said Chiarotti.

“There is something perverse in this way of categorising things. They are trying to limit women once again to their traditional place: in charge of all caregiving and household work, without complaining; for them to return home and leave the few remaining jobs to men; and to be obedient again to the male head of the family,” she said.

With this offensive they also intend, she added, “to deny the existence of different kinds of families and install the idea that only one kind of family (heterosexual, nuclear) is natural, and that the only valid way to love is heterosexual, among other denials of reality.”

Karina Bidaseca, coordinator of the South-South Programme of the Latin American Council of Social Sciences (Clacso), refers to this topic among others in the book she coordinated for that organisation together with the National University of San Martín: “Critical Genealogies of Colonialism in Latin America, Africa, the Orient” (2016).

“This reasoning reflects the scripts of what I define as ‘global colonial fundamentalisms’ (cultural, religious, political, economic and epistemic) and which are the foundations of the expanding fronts of those fundamentalists, conservative, moral and racist discourses such as the ones that refer to gender ideology,” she told IPS.

“It is an offensive that is anti-feminist and trans-homophobic and comes from an ultraconservative sector founded on evangelical Christian churches,” said Bidaseca, from Argentina, who holds a doctorate degree in Social Sciences from the University of Buenos Aires, and teaches the course “Sociology and Postcolonial Studies. Gender, Ethnicity and Subordinate Actors” in two universities.

“In Colombia, ‘gender ideology’ is crucial to understanding, for example, the peace processes that were traversed by this debate,” she said.

“In many cities in Colombia, there were massive demonstrations by people claiming that they were parents who defended the values of the traditional heterosexual family, against the ‘gender ideology’ that, according to them, is being imposed on schools through the Education Ministry,” she said, to illustrate.

“Feminazis is the term used by this discourse to describe those of us who defend the rights of sexual diversity, and of women against femicides,” she added, referring to a term coined by American radio commentator Rush Limbaugh in 1992, when talking about women who defended the right to abortion, which he described as a “holocaust”.

But other organisations attribute a large number of teen or preteen pregnancies in Latin America, among other causes, to the lack of sex education or legal abortions in cases of sexual violence.

“Due to the young age, these cases are presumed to be pregnancies that are the result of sexual abuse or coercion. They have forced maternities and their number is increasing in countries of Latin America and the Caribbean, the only region in the world where they are growing,” more than 150 civil organisations said in a statement to the Inter-American Commission on Human Rights (IACHR) in an October 24 session in Montevideo.

A year ago, also in the capital of Uruguay, a Forum of Feminist Organisations stated that the region “was facing democratic reversals as a result of setbacks that had undermined the popular will,” and due to the coming into power of governments that, among other consequences, “had served to further exclude women.”

Bidaseca said “the fundamentalist onslaught that has tried to disseminate the idea of the so-called ‘gender ideology’ has sought to frustrate the feminist struggle for equality.”

“What we see is a global movement, which has crossed countries such as France, Germany, Spain and even Mexico and Panama, where demonstrations have been organised against that alleged ideology,” said Bidaseca.