President Xi's comments came hours after President Trump warned North Korea that the US military was "locked and loaded". 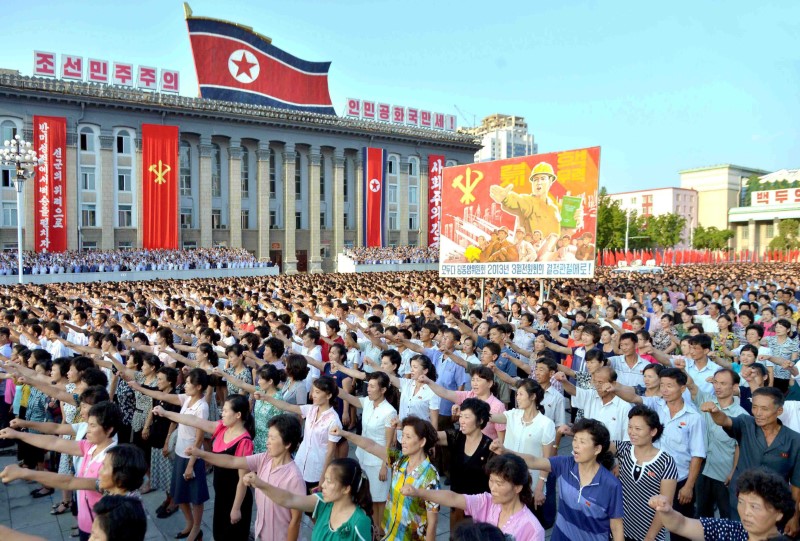 Bedminster, NJ/Beijing: China’s President Xi Jinping said there needs to be a peaceful resolution to the North Korean nuclear issue, and in a telephone call with US President Donald Trump he urged all sides to avoid words or action that raise tensions.

Xi‘s comments came hours after Trump warned North Korea that the US military was “locked and loaded” as Pyongyang accused the US leader of driving the Korean peninsula to the brink of nuclear war.

The Pentagon said the US and South Korea would proceed as planned with a joint military exercise in ten days, an action sure to further antagonise North Korea.

China’s foreign ministry said in a statement that Xi told Trump a peaceful resolution to the North Korean nuclear issue was essential, and urged calm.

“Concerned parties must exercise restraint and avoid remarks and actions that escalate tensions on the Korean peninsula,” it cited Xi as saying.

In their phone call, Trump and Xi “agreed North Korea must stop its provocative and escalatory behavior,” the White House said in a statement, and reiterated their mutual commitment to denuclearize the Korean peninsula. It added the relationship between Trump and Xi was “extremely close” and “will hopefully lead to a peaceful resolution of the North Korea problem.”

Again referring to Kim, Trump added, “If he utters one threat … or if he does anything with respect to Guam or any place else that’s an American territory or an American ally, he will truly regret it, and he will regret it fast.”

In remarks to reporters on Friday after a meeting with US secretary of state Rex Tillerson and US ambassador to the UN Nikki Haley, Trump said the situation with North Korea was “very dangerous and it will not continue”.

He added, “We will see what happens. We think that lots of good things could happen, and we could also have a bad solution.”

Despite the tough rhetoric, Trump insisted that “nobody loves a peaceful solution better than President Trump.”

South Korea‘s presidential Blue House said in a statement on Saturday the US and China were working to resolve the North Korea crisis, and it hoped the two leaders’ phone call“will be able to resolve the peak of tension and act as a catalyst for the situation to move on to a new dimension.”

Guam, the Pacific island that is a US territory and home to a US air base, a Navy installation, a Coast Guard group and around 6,000 US military personnel, posted emergency guidelines on Friday to help residents prepare for any potential nuclear attack.

North Korean state news agency KCNA said on Thursday the North Korean army would complete plans in mid-August to fire four intermediate-range missiles over Japan to land in the sea 18 to 25 miles (30 to 40 km) from Guam.

Japan’s government decided to deploy its Patriot missile defence system to four locations in the west of the country, media reported. No one at Japan’s defence ministry was available to comment on Saturday.

The governor of Guam, Eddie Baza Calvo, posted a video on Facebook of himself speaking withTrump. “We are with you a 1000%. You are safe,” Trump told Calvo.

Washington wants to stop Pyongyang from developing nuclear missiles that could hit the US. North Korea sees its nuclear arsenal as protection against the United States and its partners in Asia.

Trump said he was considering additional sanctions on North Korea, adding these would be “very strong.” He gave no details and did not make clear whether he meant unilateral or multilateral sanctions.

US officials have said new US steps targeting Chinese banks and firms doing business with Pyongyang are in the works, but these have appeared to be put on hold to give Beijing time to show it is serious about enforcing new UN sanctions.

Trump said he did not want to talk about diplomatic “back channels” with North Korea after US media reports that Joseph Yun, the US envoy for North Korea policy, had engaged in diplomacy for several months with Pak Song Il, a senior diplomat at Pyongyang’s UN mission, on the deteriorating ties and the issue of Americans imprisoned in North Korea.

But Daniel Russel, until April the top US diplomat for East Asia, said this so-called New York channel had been a relatively commonplace means of communication with North Korea over the years, and was not a forum for negotiation.

“It’s never been a vehicle for negotiations and this doesn’t constitute substantive US-DPRK dialogue,” he said, using the acronym for North Korea‘s formal name, Democratic People’s Republic of Korea.

Both Moscow and Berlin expressed alarm over the rise in rhetoric over North Korea, and Russian foreign minister Sergei Lavrov urged Pyongyang and Washington to sign up to a joint Russian-Chinese plan by which North Korea would freeze missile tests and the US and South Korea would impose a moratorium on large-scale military exercises. Neither the US nor North Korea has embraced the plan.

German Chancellor Angela Merkel said there is no military solution, adding that “an escalation of the rhetoric is the wrong answer.”

The French presidency said North Korea was engaged in a “dangerous escalation” of tensions.

President Emmanuel Macron “calls for all parties to act responsibly and prevent any further escalation in tensions,” the Elysee palace said in a statement.

Trump and Macron spoke on Saturday. The White House said Trump reiterated the US commitment to stop the “North Korean nuclear menace” and said Washington was ready with diplomatic, economic and military measures.

British foreign secretary Boris Johnson said blame for problems lay with North Korea, and that the international community was “shoulder to shoulder” in efforts to stop North Korean aggression.

“We are working with the US and our partners in the region to bring this crisis to a diplomatic end,” he tweeted.

As the rhetoric has ratcheted up, South Koreans are buying more ready-to-eat meals for emergency use, and the government aims to expand nationwide civil defence drills planned for Aug. 23. Hundreds of thousands of troops and huge arsenals are arrayed on both sides of the tense demilitarized zone between the two Koreas.