The March 30 air strike in the northern Syrian town of Latamneh injured around 70 people who suffered nausea, foaming at the mouth and muscle spasms. 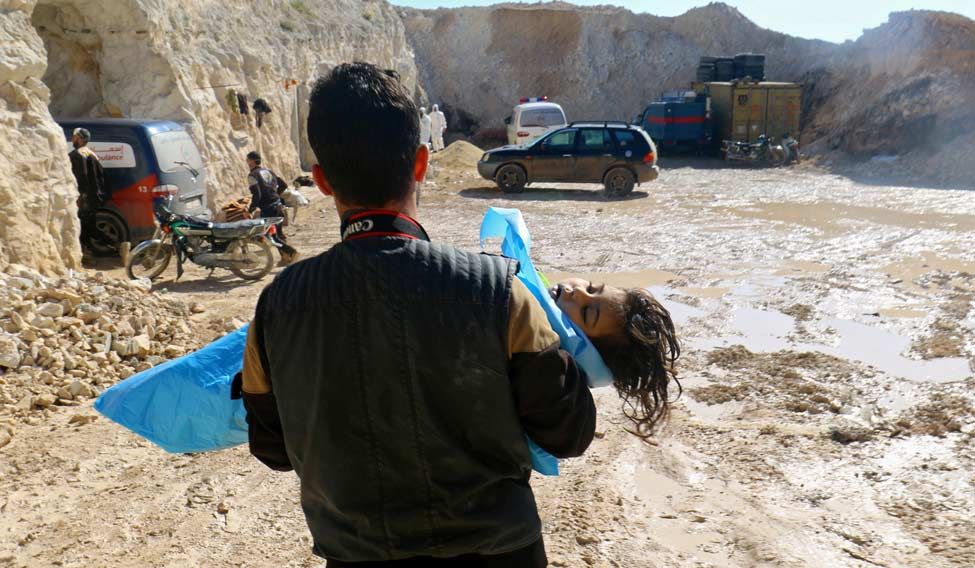 A man carries the body of a dead child, after what rescue workers described as a suspected gas attack in the town of Khan Sheikhoun. Credit: Reuters (File photo)

Amsterdam/UN: An inquiry by the global chemical weapons watchdog found sarin was used in a March attack in Syria on an opposition-held town, just days before the banned nerve agent killed dozens in a separate attack nearby, sources told Reuters on Wednesday.

The March 30 air strike in the northern Syrian town of Latamneh injured around 70 people who suffered nausea, foaming at the mouth and muscle spasms.

“Samples analysis results show clear presence of sarin,” a source told Reuters of the findings by the Organisation for the Prohibition of Chemical Weapons (OPCW). The report by the OPCW Syria Fact Finding Mission is due to be finalised within weeks.

The Fact Finding Mission reported in June that sarin was used in an April 4th attack on the town of Khan Sheikhoun that killed dozens of people and prompted the US to launch missiles on a Syrian air base.

Syria agreed to destroy its chemical weapons in 2013 under a deal brokered by Russia and the US. The Syrian government has repeatedly denied using chemical weapons during the country’s more than six-year civil war.

The OPCW Fact Finding Mission is only responsible for determining if chemical weapons were used in attacks in Syria. A joint UN and OPCW investigation, established by the UN Security Council in 2015, determines who is to blame.

This team – known as the Joint Investigative Mechanism (JIM) – has already found Syrian government forces were responsible for three chlorine gas attacks in 2014 and 2015 and that IS militants used mustard gas.

It is due to report to the Security Council this month on who is to blame for the April 4th Khan Sheikhoun attack.

The 15-member Security Council is due to renew the mandate for the JIM by mid-November. However, Russia has publicly questioned the work of the inquiry and some diplomats said it was uncertain if Moscow would support extending the mandate.

“The Russians don’t like what the JIM has come up with so far, so they are muttering about not allowing a rollover,” said a council diplomat, speaking on condition of anonymity.

Russian UN Ambassador Vassily Nebenzia declined to comment on the future of the inquiry on Wednesday.

“Renewing the UN Joint Investigative Mechanism now should be the Security Council’s top priority,” US Ambassador to the UN Nikki Haley said in a statement on Wednesday.

“We owe it to the innocent people – including children – who have suffered and died at the hands of the Syrian regime to continue to push for full accountability for these horrific crimes,” she said.

UN war crimes investigators said in a report last month that Syrian forces had used chemical weapons more than two dozen times, including in a sarin attack on the town of Khan Sheikhoun in April that killed more than 80 people.