Catalonia to Hold October Plebiscite on Independence From Spain

Previous secessionist challenges in Catalonia were blocked by Spain's conservative government and the Constitutional Court. 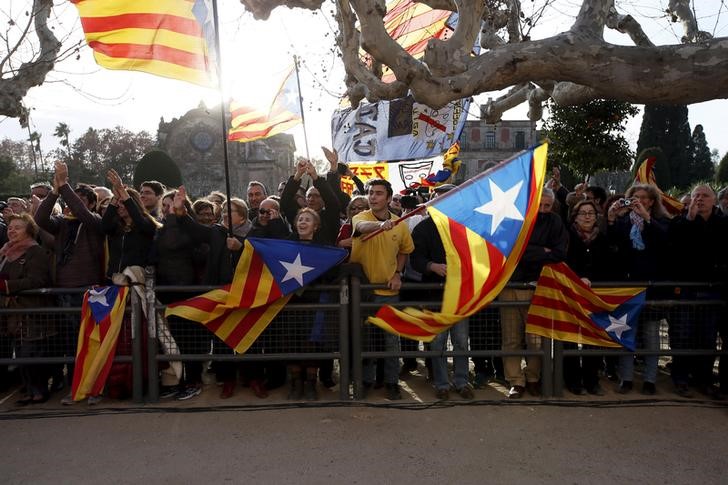 People hold "Estelada" flags, a symbol of Catalonian pro-independence, as they wait for the start of the investiture session at the Catalunya Parliament in Barcelona, Spain, January 10, 2016. Credit: Reuters/Albert Gea/Files

Barcelona: Catalonia will hold a referendum on splitting from Spain on October 1, the head of the region said on Friday, June 9, ratcheting up a confrontation with the central government in Madrid which says such a vote is illegal and must not take place.

Previous secessionist challenges in Catalonia – a populous and wealthy region in northeastern Spain which has its own language and Barcelona as its capital – were blocked by Spain’s conservative government and the Constitutional Court.

“The question will be: ‘Do you want Catalonia to become an independent state in the form of a republic’,” Carles Puigdemont, the head of the regional government, said.

He said attempts to agree on a date and the wording of the question with the Madrid government – which is vehemently opposed to allowing Catalonia to split from Spain – had failed.

“We have always made very diverse offers and all of them have been rejected without any exception,” Puigdemont said.

Madrid said that it would block any attempt to hold a vote as soon as the referendum announcement was formally rubber-stamped by Catalan authorities.

“That referendum will not take place because it is illegal,” government spokesman Inigo Mendez de Vigo told a news conference. “This is just another strategic step that doesn’t lead anywhere.”

Under Article 155 of Spain’s constitution, Madrid has the power to intervene in the running of Catalonia’s regional government, forcing it to drop the vote. This could involve sending in the police or suspending the regional government’s authority to rule.

But this is widely seen as a last resort move and many analysts believe the clash will instead culminate in months of legal wrangling and possibly regional elections in Catalonia.

The independence drive gathered strength during a recent recession, sparking mass demonstrations in favour of splitting from Spain. Some in the region say they now want to vote on their sovereignty come what may.

“It doesn’t matter if they block it, they’re not going to be able to this time because we’ve had enough,” said Isabel Fernandez, a retired hairdresser sitting at a cafe in Barcelona. The 65-year-old came to live in Catalonia when she was 11 from central Spain and said she would be in favour of secession.

Pro-independence campaigners staged a symbolic ballot in 2014, months after Scots voted to stay in the UK, and which was organised by volunteers to get around court restrictions following a legal block by Madrid.

Some 2 million people voted in favour of secession in that non-binding ballot, though turnout was relatively low.

A majority of people in Catalonia favour holding a referendum, according to opinion polls, although far fewer support splitting from Spain.

The last poll showed that 44.3% backed a split from Spain, while 48.5% want to continue with the status quo.

“I believe in the right to vote – but with regards to independence, no one has ever really convinced me of the benefits,” said Antonio Piera as he waited for a bus in central Barcelona.