More French citizens are leaving the UK than ever before given uncertainty over their future status and amidst rising anti-French racism. 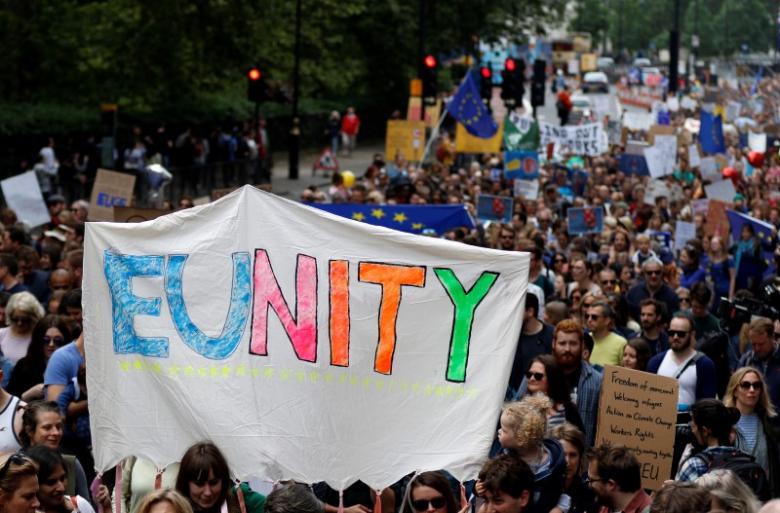 On March 29, British prime minister Theresa May will trigger Article 50 of the European Union treaty, with the benediction of the Queen and parliament, a watershed step that will begin the formal process of withdrawing from the EU, as well as a two-year-long negotiation with European countries. The proceedings of this negotiation have the three million European residents living in the UK on edge as they dread to see their right to stay used as a bargaining chip.

May has insisted that she won’t guarantee the rights of Europeans living in the UK until all member states similarly protect the rights of UK residents in their countries. Among the three million European expats, 300,000 French nationals represent one of the largest European communities in the UK (London is regularly dubbed the ‘sixth city of France’). Since the beginning of the Brexit campaign over a year ago, many French Londoners feel estranged in a country they once considered home. Now that the UK is running head-on for a hard Brexit, an increasing number are packing up and moving back to France.

The main fear is to see their status dwindle from that of a fellow European citizen to mere economic migrant; while French citizens, as any other Europeans, are exempt of any administrative red tape to live and work in the UK, a hard Brexit could turn them into migrant workers, which would mean work visas, resident permits and tedious immigration controls. Other issues also cloud their future – will they have the right to buy property? Will they still be able to send their children to university without having to pay international tuition fees? Will they still have access to social security and British retirement benefits, as it is currently permitted by a European agreement?

Gaelle Tuffigo, a 34-year-old meditation coach, has been living and working in London for 11 years. “The whole Brexit campaign was sickening,” she says. “I never expected the Brits to vote for leaving the EU. It was a huge shock.” Reluctantly, Tuffigo has made the decision to leave the country. She has already booked her one-way Eurostar ticket to Paris and her move is planned for the end of April. “There is too much anxiety… And I don’t want to live in a country that doesn’t have its arms open anymore,” she explains. In the coming weeks, Tuffigo will organise her move, say goodbye to friends and sign her name off from the French consulate registry. “I am one of many. Now it is our turn to decide whether we wish to remain or leave. Start a conversation with any French person in London, and it’s the first topic that will come up,” she says.

Jean Viry-Babel, on the other hand, has decided to stay but has relocated a large part of his company to France. The 50-year-old businessman is the CEO of a medical startup specialised in malaria diagnosis that currently employs 20 people and recently raised $10 million. Since his company largely depends on European funding, the Brexit referendum was crucial to its future. “When the referendum results came in, it took me 15 minutes to decide to leave,” he says. Viry-Babel’s situation epitomises how the UK might suffer economically from Brexit. Most of his team now lives and works in Marseille, in the south of France, where they can keep benefiting from European subvention. “My employees are happy, and the weather is better than in London!”. Viry-Babel’s optimism barely conceals how Brexit personally impacted him and his family. Viry-Babel has been a UK resident for 20 years. He lives in Chiltern, a cosy residential district outside London with his British wife and their two bilingual children. For the first time, Viry-Bael had French passports made for his children and his wife applied for French citizenship. “We had never considered this before. But if we have to relocate to France, having French nationality will certainly help the process,” he explains. He is profoundly disappointed and angry with the country that has welcomed him for 20 years. “The British press is sickening these days. New measures keep coming up, such as charging companies who employ non-British workers, or even forcing companies to draw a list of their foreign employees.” In anticipation of post-Brexit administrative turmoil, he has applied for permanent residency status.

Since the Brexit referendum last June, applications for permanent residency have doubled, with a third of all applications being rejected. The process requires completing a tedious 85-page form that requires personal documentation, causing an unprecedented bureaucratic logjam and a situation that would have been unimaginable just a year ago. Despite the distressing uncertainty of what the future holds for them, Tuffigo, Viry-Babel and the thousands of other French expats in London are relatively protected from the spate of racist attacks that the Brexit campaign has induced throughout the country.

According to the home office, hate crimes have soared by 41% in the months following the Brexit referendum compared to 2015, with an estimated 5,500 racist aggressions. Although these attacks have been mainly directed towards Muslims and East Europeans (a Polish man was murdered last September in London), the French have also suffered from post-referendum bigotry, with numerous reports of racist remarks. The situation even forced French ambassador Sylvie Bermann to speak up. “[French people] were not used to this sort of abuse in a country where many of them have lived for decades and which they regarded as a success story in terms of dynamism and respect for others,” she declared at a House of Lords committee last October.

Bérengère Lefur, 42, has suffered anti-French xenophobia and has decided to leave the country. For 20 years, Bérengère had been living and working in Portsmouth, a harbour town on the Channel, just a hundred miles from the coasts of France. Up until last July, Lefur was working as a social worker for the Hampshire County Council. “This country was mine,” she says, “but the Brexit campaign changed everything”.

Although teasing one another has always been an integral part of the entente between the French and British, the rivalry took on a different tone after the Brexiters’ victory. “Colleagues started making fun of my French accent in public, school friends sneered at my son asking him to ‘go back to his country’; a man even threatened me and my son when he heard us speaking French at the supermarket,” Lefur says. For Lefur, the shock of Brexit was brutal. In less than a month, she and her British husband Neville decided to relocate to France. In December 2016, the family arrived in Availles, a small village in the west of France, where they started a new life from scratch. “We are the village’s Brexit refugees,” she says. Neville is now seeking French nationality, so as to keep his European citizenship. Their son, 14-year-old Leon, has more trouble adapting to his French school. Having been brought up in a British environment all his life, his level of French is poor and he has trouble understanding his fellow schoolmates. Ironically, the village of Availles is home to a dozen British families, mainly senior couples enjoying their retirement plan. They are a sad mirror to Lefur’s story, as they share the same fear of wondering whether they will have the right to stay in France or not.

Meanwhile, France rejoices to see its expats – and their money – come home. French authorities have already started rolling out the red carpet for doubtful businesses seeking new headquarters. Since last year, the French government is at full throttle to attract businesses, from big multinational banks to smaller tech startups, and French cities are engaged in a fierce competition to attract sulking cross-Channel nationals. At Paris Région Entreprises, the entity in charge of wooing businesses to the French capital, 24 companies are in the process of shifting their headquarters to Paris. “We are helping them with finding premises, and we provide information about fiscal and labour law,” says Robin Rivaton, in charge of the mission. “But the big fish are yet to come.”

It isn’t just the French business community in London that is at stake. France hopes to shake London’s financial dominance altogether. More than 13,000 employees working in the finance sector are expected to relocate to Europe. JP Morgan, Citigroup and Morgan Stanley have already announced that they were going to move to Europe. HSCB chief executive Stuart Gulliver announced in January that the bank may move 20% of its London banking operations to Paris. In Marseille, the second biggest city in France, by the Mediterranean sea, Philippe Stefanini is at the head of Provence Promotion, a regional organisation aimed at attracting French companies. In one word, his job is to promote and lobby for the Marseille region’s assets. “Salaries are 40% lower than in London, and we have the sea,” he smiles. Philippe and his team of six work relentlessly to draw French companies from London to Marseille. “I spend my time between Marseille and London. We meet a dozen companies per week.”

It is thanks to his lobbying that Viry-Babel moved his company to Marseille. “Jean is one of our finest catch,” Philippe prides himself. “Our city is now home to a fast-and-growing startup that would have stayed in London if it weren’t for Brexit.”

If Tuffigo and Lefur have already made the decision to move, the bulk of the French community in London is still waiting for another crucial outcome – the French presidential election. On May 7, France will have a new president. With far-right candidate Marine Le Pen leading in the polls, her victory is, more than ever, a high probability. This prospect has the liberal French expatriates fearing that they will be stuck between a rock (the Brexit) and a hard place (French nationalism).

Paul Gasnier is a French journalist based in Paris. He makes reports for French television and occasionally collaborates with foreign news outlets.