However, the Brazilian president did not publicly indicate any big change in the country's stance on the issue. 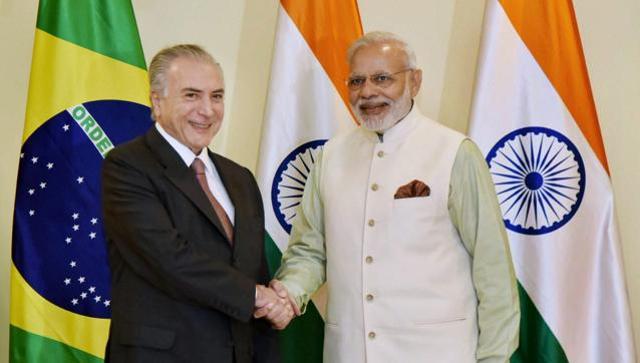 Benaulim, Goa: Brazil remained non-committal about supporting India to join the Nuclear Suppliers Group (NSG), with Brazilian President Michel Temer conveying an “understanding” of India’s “position” to Prime Minister Narendra Modi but not publicly indicating a major change in its stance since June.

In his first foreign visit outside of Latin America, Temer attended the BRICS summit on Sunday. On Monday morning, he held extensive talks with Modi at the five-star hotel Taj Exotica, on the shores of the Arabian Sea.

“We thank Brazil for understanding India’s aspiration for membership of the Nuclear Suppliers’ Group,” Modi said in his press statement.

Later expanding on this, Ministry of External Affairs secretary (east) Preeti Saran said that Modi raised the matter of India’s interest in joining the NSG. “Brazilian President conveyed his understanding of aspirations and conveyed that he would work with other countries of the NSG in helping India move towards its membership,” she said.

At the NSG plenary in Seoul in June, Brazil had told the Indian delegation that it supported India, but wanted a “non-discriminatory process” rather than a country-specific admission.

Modi told South African President Jacob Zuma that India “hoped that they continue their support” for India’s NSG bid. South Africa was one of the countries that had doubts on the process of India’s application, but apparently changed its position after Modi’s visit to Pretoria in July.

China, which has been the main hurdle for India, did not give a positive response, except for President Xi Jinping offering a second round of senior official-level talks on the NSG application. After the first round of talks were held in Delhi last month, China also held a similar discussion with Pakistan.

The BRICS Goa declaration noted that nuclear energy “will play a significant role for some of the BRICS countries in meeting their 2015 Paris Climate Change Agreement commitments and for reducing global greenhouse gas emissions in the long term”.

“In this regard, we underline the importance of predictability in accessing technology and finance for expansion of civil nuclear energy capacity which would contribute to the sustainable development of BRICS countries,” it added.

Ministry of External Affairs secretary (economic relations) Amar Sinha had referred to this language – inclusion of ‘predictability’ in the text – as a nod towards India’s argument that NSG membership will give an assurance to investors to back India’s civil nuclear energy industry and therefore help meet its commitments from the Paris climate change summit.