A country where Orthodox Serbs, Catholic Croats and Muslim Bosniaks are taught differently, the youth is beginning to speak out against this discrimination. 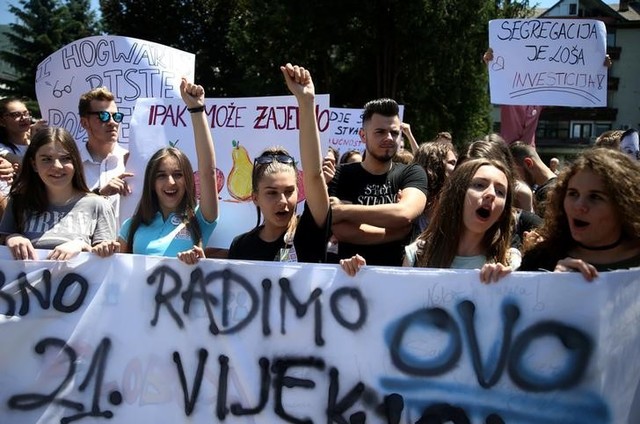 Bosnian high school students hold placards reading "Are we really doing this in the 21st century?", "We can do it together" and "Segregation is bad investment" during a protest against segregation at schools in Travnik, Bosnia and Herzegovina, June 20, 2017. REUTERS/Dado Ruvic

Travnik, Bosnia: High school students and activists pressed their protest against ethnic segregation at schools in central Bosnia on Tuesday, after scoring an unprecedented victory against a government decision to further divide them along ethnic lines.

The Bosniak and Croat students succeeded in their year-long fight against the regional government, forcing it to reverse its decision to divide them into two separate, ethnically based schools in the town of Jajce.

Emboldened by their victory, the young people gathered on Tuesday before the government building in Travnik to request the abolition of other schools in the Federation of Bosnia and Herzeovina where Bosniak and Croats attend separate classes in the same building.

They held placards reading “Friendship under Embargo” and “Death to Politics, Freedom to Education”.

Following the war of the 1990s, Orthodox Serbs, Catholic Croats and Muslim Bosniaks represent so-called constituent people in Bosnia. In schools, each group has its own national curriculum and each is taught in the Serb, Croat or Bosnian language, although linguists say they are essentially one language.

“We have fought and will continue to fight against fascism at schools, divisions and segregation,” said Nikolas Rimac, a Croat student who led the fight against divisions in Jajce. “It’s great that the ministry overturned its decision to form a new school, but this is just the first step.”

More than 20 years since the war between Bosnian Serbs, Croats and Bosniaks, reconciliation is slow. Ad hoc solutions that were devised on an interim basis after the war are firmly in place.

Among those are 54 so-called “Two schools under one roof”, one of them in Jajce, where Croat and Bosniak children attend classes according to their national curricula. They use the same building but are physically separated and don’t socialise.

“If you are put in a fence in the primary school, and then again in the secondary school, you’ll never ask yourself what is it like to socialise with these other people,” Sabina Ruzdijic, a mathematics and physics teacher from Jajce, told Reuters.

Rimac said such schools were “prisons and factories of hatred”.

In Bosnia, where Bosniak, Croat and Serb nationalist parties base their power on distrust of each others, all attempts to unify education have failed so far.

“Unless politicians make necessary changes and abolish divisions, there will be no co-existence and progress,” said Amar Kundalic, the organiser of the protest. “That is the only way to stop young people from leaving Bosnia because of education.”

Teacher Ruzdijic was more optimistic: “I admire these kids. They are my heroes and inspiration. They motivate me even more to do my job.”