The working group's agenda is in line with an ill-defined repatriation deal signed between the countries last month. 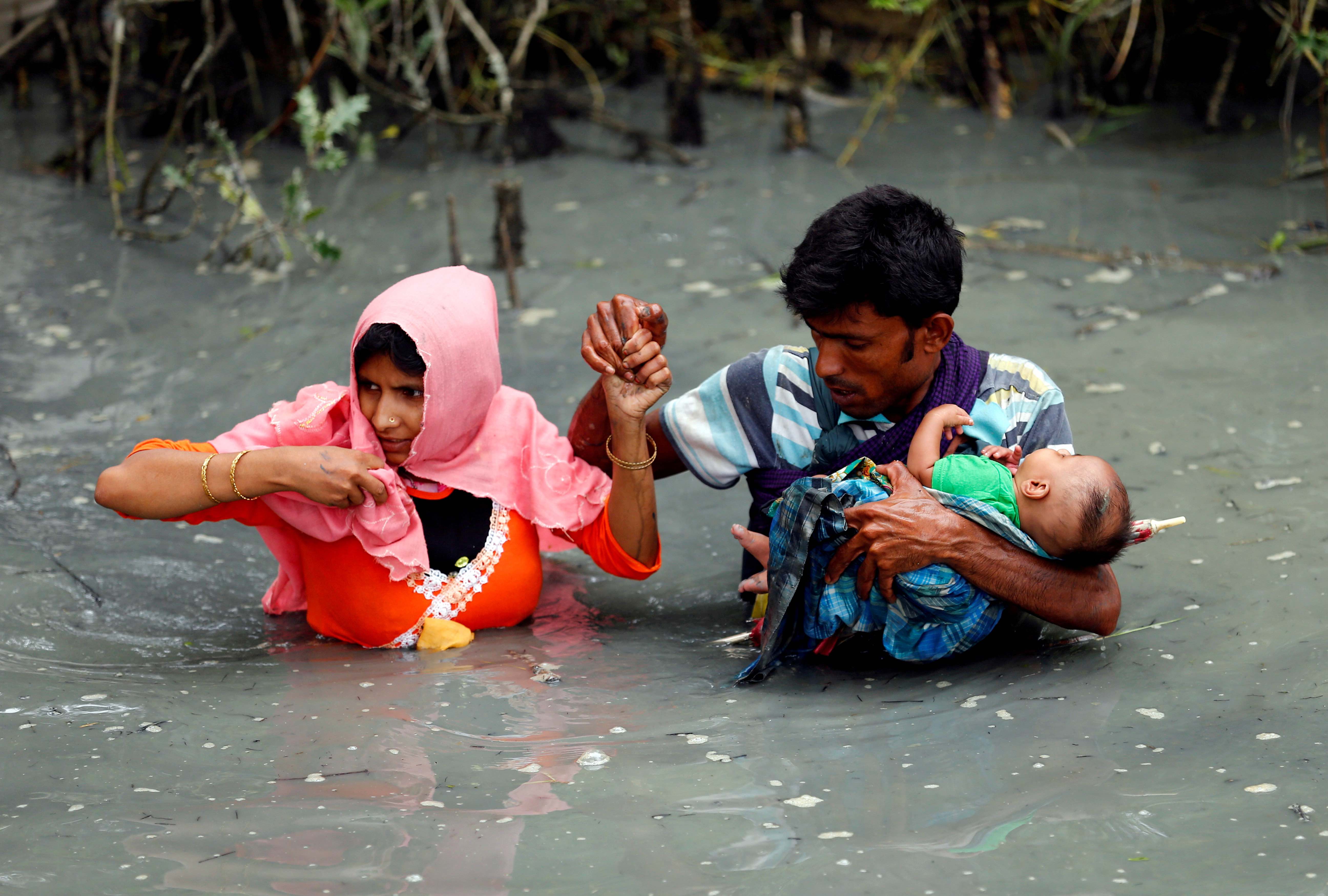 Rohingya refugees carry their child as they walk through water after crossing the border by boat through the Naf River in Teknaf, Bangladesh, September 7, 2017. Credit: Reuters/Mohammad Ponir Hossain/Files 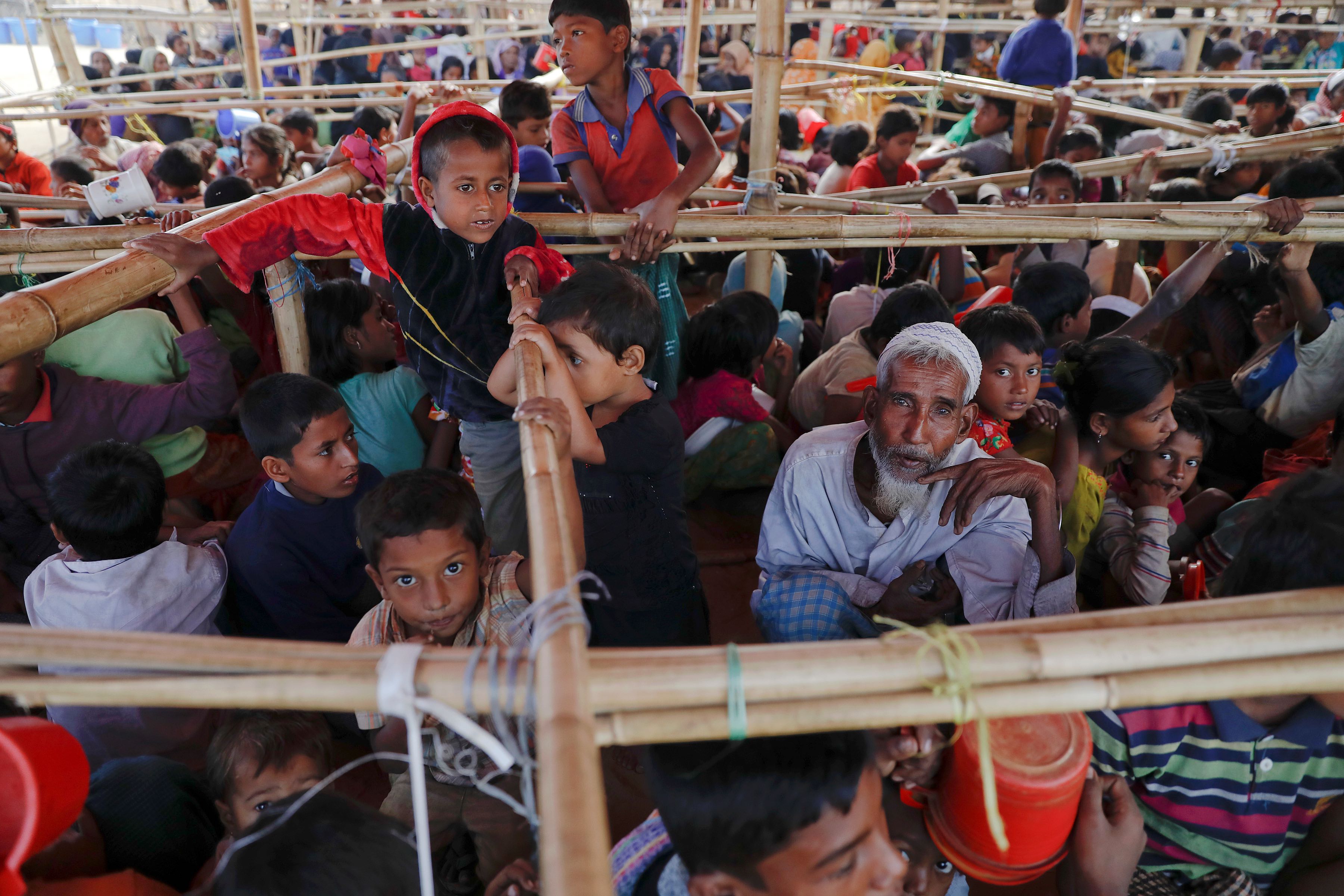 An elderly Rohingya refugee joins children as they wait for food to be distributed at Tengkhali camp, near Cox’s Bazar, Bangladesh December 7, 2017. Credit: Reuters/Damir Sagolj

Dhaka: In line with the nebulous deal inked between Bangladesh and Myanmar on November 23 for the repatriation of Rohingya refugees to their homeland, the two countries on Tuesday (December 19) formed a Joint Working Group (JWG) to start the process by January 23 next year.

After the four-hour meeting, the heads of the two delegations signed the terms of references in the presence of Bangladeshi foreign minister A.H.M. Mahmood Ali and formed a 30-member JWG, 15 each from both countries.

At the press briefing that followed, Ali told journalists that the JWG would not only work “to repatriate the displaced Myanmarese minorities”, but also would make efforts aimed at “resettling them in Rakhine State and providing support to reintegrate them in the society”.

He said the JWG will chalk out the plan to start repatriating Rohingya refugees to Myanmar by January 23 next year. The JWG has been given the authority to makes decisions regarding Rohingya repatriation based on “past experiences and current necessities”, said Ali.

The group will also prepare a draft “physical arrangement agreement” on Rohingya repatriation and will conduct a field trip so that members on both sides of the border can “monitor and make recommendations for the respective governments”, the foreign minister added.

If members of the JWG disagree, they will have to refer it to their respective governments and the issues must be resolved within three months.

Ali also said that as per the terms of reference, the JWG will provide credible and objective information about the repatriation process to the media and brief journalists about “those who have decided to return to their own soil”. The Tuesday briefing, however, didn’t allow any queries from reporters.

A foreign ministry official later told The Wire that in the signed terms of reference, Rohingya refugees have been addressed as “displaced Myanmar residents”. The ministry official said that the Bangladeshi delegation used the term ‘Rohingya’ verbally during the meeting but left it out of the written terms of reference. On Sunday, an inter-ministerial meeting was held at the Bangladeshi foreign ministry to prepare for Tuesday’s agreement. There, it was decided that Bangladesh would use the term ‘Rohingya’ during the Tuesday meeting.

For the stranded Rohingya refugees in Bangladeshi camps, getting the “Rohingya identity” back in Myanmar has become their primary demand as they believe without the identity, “nothing will change there”.

Abul Syed, a Rohingya refugee leader, told Pope Francis while meeting him in Dhaka on December 2 that “if we go back there without identity, we will never be safe”.

The foreign ministry official also told The Wire that the Myanmar delegation was reluctant to budge from an outdated 1993 agreement on repatriation. The Wire in a report earlier explained why that agreement didn’t work then, and why it won’t work now as well.

Human Rights Watch has claimed, based on satellite images, that dozens of Rohingya villages were burned the week Myanmar signed an agreement with Bangladesh to repatriate hundreds of thousands of refugees. The reports that villages were still being burned as late as December 2 contradicted assurances from the Myanmar government that violence had ceased and that the Rohingya could safely return to Myanmar, said the rights group.

A national Bangladeshi vernacular daily on Tuesday reported from Cox’s Bazar that as many as 18,000 new Rohingya refugees have gathered at Dhankhali, waiting to cross the Naf river to enter into Bangladesh. About 500 new refugees crossed the river at night, reported the daily.

An estimated 655,000 Rohingya have entered Bangladesh, fleeing the violence in Myanmar’s Rakhine State since August 25, raising the total Rohingya population in Cox’s Bazar to 867,000, said the UN’s migration agency

Delwar Hossain, director of the East Asia Study Center of Dhaka University, told The Wire that the Myanmar government has been trying to strong-arm Bangladesh into accepting an unacceptable and damaging status quo.

“The deal that was signed between Bangladesh and Myanmar raised a lot of question. Now a JWG is being formed in line with that deal. I don’t know how good it will be in actually repatriating the refugees back to Myanmar,” said Hossain.