“Everyone is not an expert on forced disappearances. We have to make sure no clue is left behind,” the Rapid Action Battalion officer has been quoted as saying.

Members of the Rapid Action Battalion (RAB), in their distinctive black attire, stand guard on a street in Dhaka. Credit: Reuters/Files 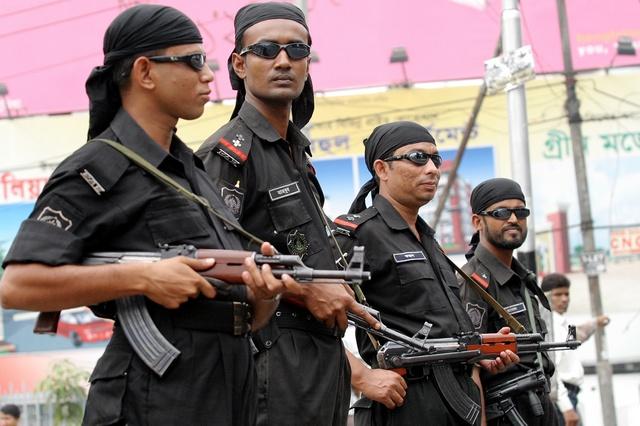 Members of the Rapid Action Battalion (RAB), in their distinctive black attire, stand guard on a street in Dhaka. Credit: Reuters/Files

Dhaka: A secret recording of a senior officer employed by Bangladesh’s paramilitary organisation, Rapid Action Battalion (RAB), has added pressure on the government to come clean on its use of enforced disappearances, torture and extra-judicial killings.

In the recording, obtained and authenticated by Swedish National Radio, which broadcast the story on Monday (April 3), the RAB officer talks about how the organisation routinely picks people up, kills them and disposes off their bodies.

Swedish foreign minister Margot Wallström condemned the practices. “There is only one thing to say about this: that it’s horrific and that it must stop and that Bangladesh must take responsibility for this.”

“We will act, in particular via the EU, but also through our bilateral contacts, to make it completely clear that this is not acceptable, and must stop immediately,” she said.

The report comes a week after the UN Human Rights Committee published a report criticising the Bangladesh government for its “reported high rate of extra-judicial killings by police officers, soldiers and Rapid Action Battalion (RAB) force members and the reported enforced disappearances, as well as the excessive use of force by State actors.”

The UN committee went onto say that, it “is further concerned by the lack of investigations and accountability of perpetrators, leaving families of victims without information and redress.”

Since the Awami League came to power in 2009, human rights organisation Odhikar has identified over 325 people who were picked up and secretly detained for various degrees of time, allegedly by one of the country’s law enforcement bodies, including the RAB. After weeks or months in unlawful detention, the men are then either ‘shown arrested’ or killed. Out of the more than 90 people secretly detained in 2016, 22 dead bodies have been found.

In relation to extra-judicial killings – which happened in even greater numbers under previous governments – since 2009, Odhikar reports nearly 1,300 deaths.

Earlier this month, Anisul Huq, the Bangladesh law minister, told the UN’s Human Rights Committee that, “With regard to allegations of ‘extra-judicial killings’, ‘enforced disappearances’ and ‘torture in custody’. I would like to stress that our government has taken meaningful actions to bring such incidents of human rights violations to a very low level.”

Other government representatives claim that all the extra-judicial killings are lawful and that state bodies are not involved in any of the alleged disappearances. “Those who died during the gunfights with police and other security forces as well as during police raids are criminals. Their deaths can’t be defined as extra-judicial killings,” Hasanul Haq Inu, the country’s information minister, recently said.

In the Swedish Radio recording, the unnamed senior RAB officer, who was unaware that his conversation was being taped, said that there were three aspects to an enforced disappearance: the capture, the killing and the disposal.

“Everyone is not an expert on forced disappearances,” the officer is reported by Swedish radio to have said. “We have to make sure no clue is left behind. No ID cards that slip-off. We have to wear gloves; we can’t leave footprints behind and have to wear covers on our shoes to prevent that. We can’t smoke during these operations.”

The officer talks about how some of the picked up men are tortured. According to Swedish Radio, the officer “describes a dark room with a lamp in the middle where an arrested man was stripped naked. They hung him in handcuffs, and tied bricks to his testicles. His testicles were almost ripped off by the weight, the officer says. The tortured man fell unconscious and the RAB officer says he did not know if the man was dead or alive.”

In the recordings obtained by the radio station, the RAB officer is said to have claimed that dead bodies of the men who are killed are disposed of by throwing them into a river with blocks of concrete attached to their bodies. He says the fate of the men is decided by “high ups”.

This description of the disposal matches what happened to seven men who were picked up and killed by the RAB in April 2014, in a dispute between local leaders of the governing Awami League belonging to the district of Naranganj, close to the country’s capital city of Dhaka. A few days later their bloated bodies floated to the surface of the Shitalakkya river where they had been dumped. In January this year, a court convicted 35 people of involvement in the murders, sentencing 26 of them, including three former RAB officers, to death.

No other recent disappearances – including those of 19 opposition activists picked up in the capital city of Dhaka over a two week period four months earlier – has resulted in similar investigation or prosecution.

The Swedish Radio recording of the RAB officer is the first time that a media organisation has managed to record a conversation in which a Bangladeshi law enforcement officer has admitted to their involvement in disappearances and extra-judicial killings.

RAB’s legal and media wing director, Commander Mufti Mahmud Khan, denied the allegations contained in the secret recording. He told Bangladesh’s national newspaper Prothom Alo  that “RAB do nothing going against legal provision. …Those who have been killed in RAB’s crossfire so far are armed notorious terrorists, robbers and militants. When drives are conducted to arrest them, they open fire on RAB. And RAB also open fires in self-defence,” he added. ‘Things are not as though only terrorists were killed in the RAB shooting; RAB officers and members were also killed and maimed.”

David Bergman is a writer based in Bangladesh. He also runs the Bangladesh Politico and Bangladesh War Crimes blogs. Follow him on @davidbangladesh.