Mauricio Macri's return to debt-dependent framework of the 1990s since taking office in 2015 has raised fears of a profound crisis. 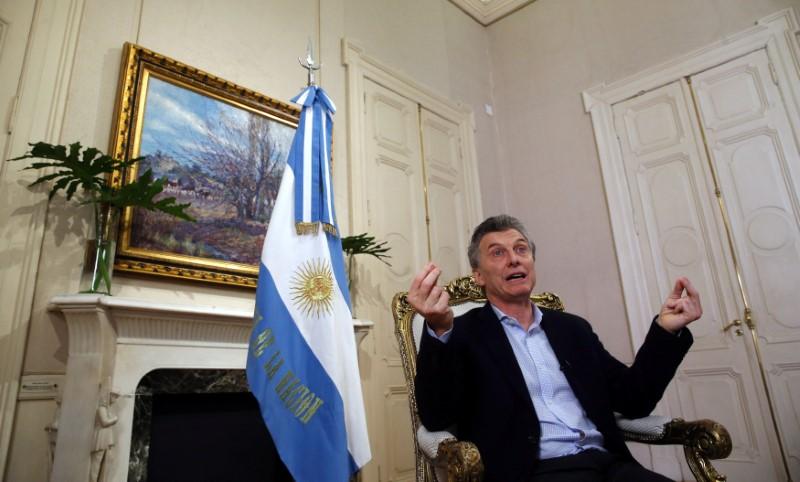 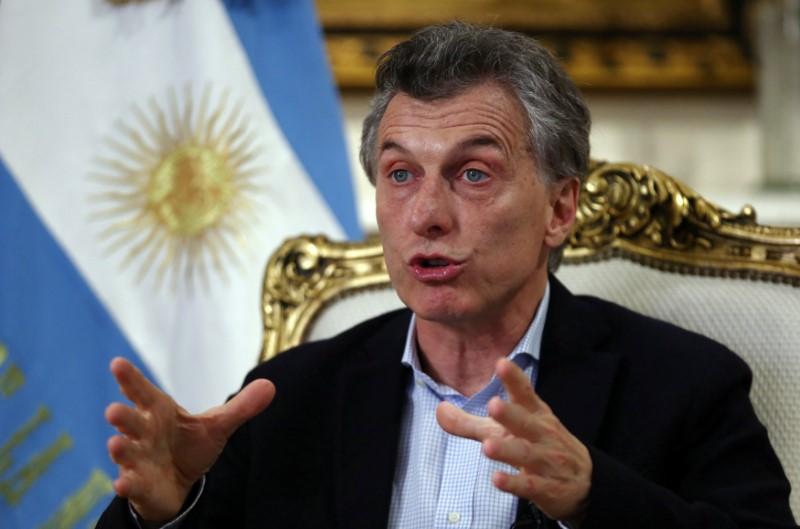 In Argentina’s 2015 presidential run-off election, the neoliberal right-wing coalition ‘Cambiemos’ (literally, “lets change”), headed by Mauricio Macri, defeated the populist Kirchnerista candidate by just two percentage points. Macri’s triumph heralded a return to the neoliberal policies of the 1990s and ended 12 years of heterodox economic policies that prioritised income redistribution and the internal market. The ruling coalition also performed well in the October 2017 mid-term elections and has since begun implementing a draconian set of fiscal, labour and social security reforms.

One of the hallmarks of the Cambiemos government so far has been a fast and furious return to international credit markets and a very substantial increase in new public debt. Indeed, since Macri came to power in 2015, Argentina has issued debt worth more than $100 billion. This marks a clear contrast to the Kirchner administrations, during which the emphasis was debt reduction.

Both Néstor and Cristina Kirchner pointed to desendeudamiento – debt reduction – as one of the great successes of their administrations. To what extent was debt reduced during the 12 years of Kirchnerismo?

Figure 1 shows the evolution of Argentina’s public debt stock and the debt to GDP ratio between 2004-2017. One can see that there was a substantial reduction in the debt to GDP ratio between 2004-2011 – the first two Kirchner terms – due primarily to: the 2005 and 2010 debt restructuring offers, a deliberate policy of desendedudamiento (debt cancellation) and high growth rates.

Indeed, debt to GDP dropped from 118.1% in 2004 to 38.9% in 2011. One can also see that the actual stock of public debt fell after the 2005 debt restructuring process, and then remained relatively stable until 2010. In 2011, it began a slow upward trend, due to the re-appearance of the foreign exchange constraint once the commodity bubble burst and capital flight increased. 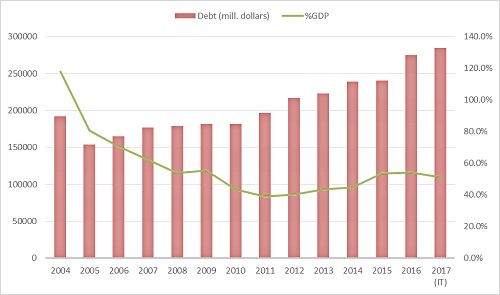 An additional, fundamental change occurred during the first two Kirchner administrations: the change in currency composition of Argentina’s public debt. Indeed, as Figure 2 shows, peso-denominated public debt reached 41% of total debt after the 2005 debt-restructuring process. Between 2005 and 2012 it remained relatively stable, and then, after 2012, dollar-denominated public debt began to grow again although never reaching pre-2005 debt-restructuring levels. The currency composition change is key, since it reduces considerably the pressure on the external accounts. 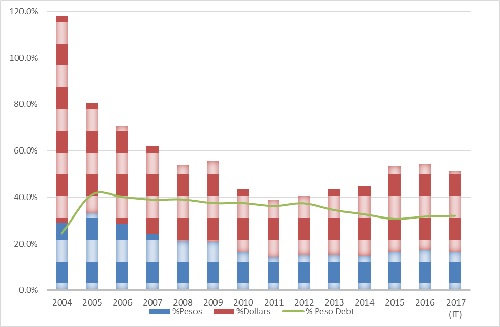 Since Macri became president in December 2015, there has been a dramatic change in official public debt strategy, radically reversing the process of debt reduction of the previous decade. As shown in Figure 1, there was a substantial jump in the stock of public debt in 2016, and it has continued to grow in 2017.The result to date has been a substantial increase in the stock of Argentina’s dollar-denominated public debt, as well as an increase of the debt service to GDP ratio. New debt has been used to cover the trade deficit, pay off the vulture funds, finance capital flight and meet debt service payments. All of this has resulted in growing concerns about Argentina’s future economic sustainability, not to mention any possibility of promoting economic development objectives.

Upon taking office, the Macri administration rapidly implemented a series of policies to liberalise financial flows and imports, and a 40% devaluation of the Argentine peso. In this context, it also went on a debt rampage, increasing dollar denominated debt considerably. Between December 2015 and September 2017, Argentina’s new debt amounts to the equivalent of $103.59 billion. This includes new debt issued by the Treasury (80%), provincial governments (11%) and the private sector (9%). While Argentina’s debt had been increasing slowly since 2011, the jump experienced in 2016 was unlike any other in Argentina’s history.

If the increase in debt is alarming, the destination of those funds is also cause of concern. Data from Argentina’s Central Bank (Banco Central de la República Argentina or BCRA) show that during the first eight months of 2017, net foreign asset accumulation of the private non-banking sector totaled $13.32 million, 33% more than all of 2016, which itself was 17% more than all of 2015. This means that since December 2015, Argentina has dollarised assets by approximately $25.29 billion.

According to the BCRA, during the same period there was a net outflow of capital due to debt interest payments, profits and dividends of $8.231 billion. Additionally, the net outflow due to tourism and travel is calculated at roughly $13.43 billion between December 2015 and August 2017.

In sum, the dramatic increase in dollar-denominated debt during the two first Macri years served to finance capital flight, tourism, profit remittances and debt service, all to the tune of roughly $50 billion.

Where is this headed?

Argentina’s experience since the 1976 military coup until the crash of 2001 has shown how damaging is the combination of unfavorable external conditions and the destruction of the local productive structure. The post-crisis policies of the successive Kirchner administrations reversed the debt-dependent and deindustrialising policies of the preceding decades. However, since Macri took office in December 2015, Argentina has once again turned to debt-dependent framework of the 1990s. Not only has public debt grown in absolute terms, but the weight of dollar-denominated debt in total debt has also increased. Despite significant doubts regarding the sustainability of the current situation, the government has expressed intentions of continuing to issue new debt until 2020.

What are the main factors that call debt-sustainability into question? First, capital flight, which, as we have said above, is increasing, is compensated with new dollar-denominated public debt. Second, Argentina’s trade balance turned negative in 2015 and has remained so since, with a total accumulated trade deficit between 2015 and the second quarter of 2017 of $6.53 billion. Import dynamics proved impervious to the 2016 recession, therefore it is expected that the deficit will either persist as is or increase if there are no drastic changes. Furthermore, in the 2018 national budget bill sent to Congress, treasury secretary Nicolás Dujovne projects that the growth rate of imports will exceed that of exports until at least 2021, increasing the current trade deficit by 68%.

Finally, according to the IMF’s World Economic Outlook (October 2017), growth rate projections for industrialised countries increase prospects of a US Federal Reserve interest rate increase. This would make Argentina’s new debt issues more expensive, increasing the burden of future debt service and increasing capital flight from Argentina (in what is generally referred to as the “flight to safety”).

The factors outlined above generate credible and troublesome doubts about the sustainability of the economic policies implemented by the Macri administration. While there are no signs of a major crisis in the short term (that is, before the 2019 presidential elections), there are good reasons to doubt that the current level of debt accumulation can be sustained to the end of a potential second Macri term (2023). In other words, there are good reasons to believe that Argentines will once again have to exercise their well-developed ability to navigate through yet another profound debt crisis. This is not solely the authors’ opinion. In early November 2017 Standard & Poor’s placed Argentina in a list of the five most fragile economies. It looks like, once again, storm clouds are on the horizon.