The Anguish Caused by Enforced Disappearances in Pakistan

There are officially at least 1,400 unresolved cases of enforced disappearances in Pakistan, as noted by the International Court of Justice in 2016. 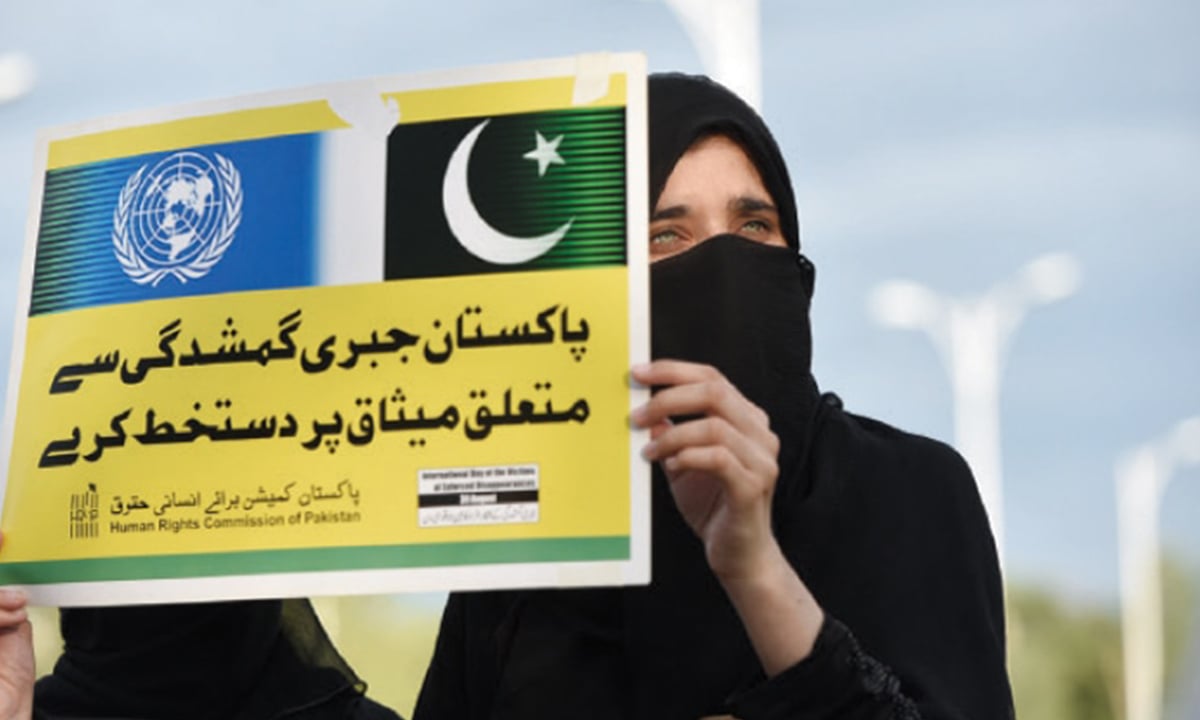 Marvi Sario would update her Facebook page at least twice every day for nearly three months that her father, Hyderabad-based activist Punhal Sario, was missing. A 20-year-old school teacher, Marvi would upload photos of her father and write posts in Sindhi and Roman Urdu. At times, these posts were aggressive, but on other occasions, they would be desperate pleas for the early release of her father, who was picked up by plainclothesmen on August 4, 2017.

“My father is diabetic. He was not carrying his medicines when he was taken away. We are worried if he has access to his medicines. We have no idea how he is doing,” Marvi said in a phone conversation that took place before he was released. The next two months brought more misery. Marvi’s only brother – she also has four younger sisters – was admitted to a government hospital for a mental illness and later suffered a heart attack. “I am totally blank. I just don’t know what to do,” reads Marvi’s post from September 15.

Adding to their ordeal, the landlord forced the Sarios to vacate his house, citing discomfort over visitors pouring in to inquire about or condole over Punhal’s disappearance. “We were given a five-day notice. [The landlord] did not even return the advanced money. My father’s friends helped with moving. Then the new landlord – coming to know about our background – also hinted that he may not tolerate us for long.”

Hani Baloch, daughter of Abdul Wahid Baloch, went through a similar trauma when her father was picked up by security agencies in July 2016. “When we first got news of plainclothesmen taking our father away, we were shell-shocked. This was followed by a few aggressive relatives landing at our house and throwing away all his books, saying it is because of his work that we are in trouble today. When this and the constant pouring of visitors condoling over my father’s abduction became the reality of our everyday life, I realised I would have to take charge of the matter. I have never done anything without my father’s advice. But he was not there to guide me on how to file [a first information report (FIR)] and a court case.”

Hani, a BSc student, recalls being turned away by the police. There were other problems too. Her father’s salary as a telephone operator was no longer coming in, forcing Hani and her sister to drop out of school. Moreover, their 11 year old sister stopped talking, out of the trauma of her father’s disappearance, while their mother and grandmother started giving in to poor health.

Wahid Baloch returned the same year in early December. These four months were marked by extreme financial distress, with the family having to sell jewellery to make ends meet. “Our maternal uncle helped us financially. With my incomplete degree, I wouldn’t have found any decent work to get by,” Hani recalls.

In Karachi, life for 29-year-old Naeem Haider’s family has come to a complete standstill ever since he, along with five members of the Shia community he belongs to, were picked by law enforcement agencies (LEAs) in November last year. No official reason has been given as an FIR is yet to be registered. There is, however, an informal communication of suspicion of him being involved in sectarian killings.

“My father, now seriously ill, has postponed every single household decision, including fixing of any fused light bulb till Naeem’s return. He wants everything left the same way as it was before Naeem was taken away,” says Samia, Naeem’s sister.

There are officially at least 1,400 unresolved cases of enforced disappearances in Pakistan, as noted by the International Court of Justice (ICJ) in 2016. Though there is no data on the background and trends of those disappeared, a majority of their profiles – as documented by Advocate Ali Palh of Sindh Human Rights Defenders – read as male, aged between 22 to 45 years old.

In terms of ideological background, they may be involved in politics (nationalist or mainstream) and religious causes. Economically, they are from poor and lower-middle-class sections characterised by large families, joint family system, limited means of income and no savings. Those picked are mostly bread earners of the family. Compounding the misery of the family is the absence of any social security system in Pakistan providing basic income to meet minimum expenses.

Of late, a number of activists working on human rights, social and development issues have forcibly disappeared. Vocal social media activists have also been targeted. In a wave that started in Sindh in August 2017, 80-plus citizens were forcibly disappeared in the course of 30 days alone. A few of them returned within 24-48 hours. But now they refuse to publicly share the details of their “detention”.

Article 2 of the International Convention for the Protection of all Persons from Enforced Disappearance describes Enforced Disappearance as “considered to be the arrest, detention, abduction or any other form of deprivation of liberty by agents of the state or by persons or groups of persons acting with the authorisation, support, acquiescence of the state, followed by a refusal to acknowledge the deprivation of liberty or by concealment of the fate or whereabouts of the disappeared person, which place such a person outside the protection of the law.”

In a typical case of enforced disappearance, Pakistani agencies follow the same pattern as their international counterparts. As described in a study by Tanja Florath: “Members of security forces, either military or police, enter a house in the early morning and take one or several members of the family with them. The perpetrators might or might not wear a uniform; they usually carry weapons and either threaten the family member or explain that the detained person will return to them soon. At a subsequent stage … the family members will start to inquire about the whereabouts of their loved ones and consistently receive the answer that nobody fitting the description has been seen or taken.”

“They will eventually hear from informal sources that their relatives have been seen in a secret place of detention. At the same time, the detained person will likely be interrogated, tortured, often transferred and in all likelihood subsequently murdered. During that time, the forcibly disappeared have no access to the outside world and no legal assistance.” (Tanja Florath, Effective Remedies for Enforced Disappearances – The Suitability of Habeas Corpus) 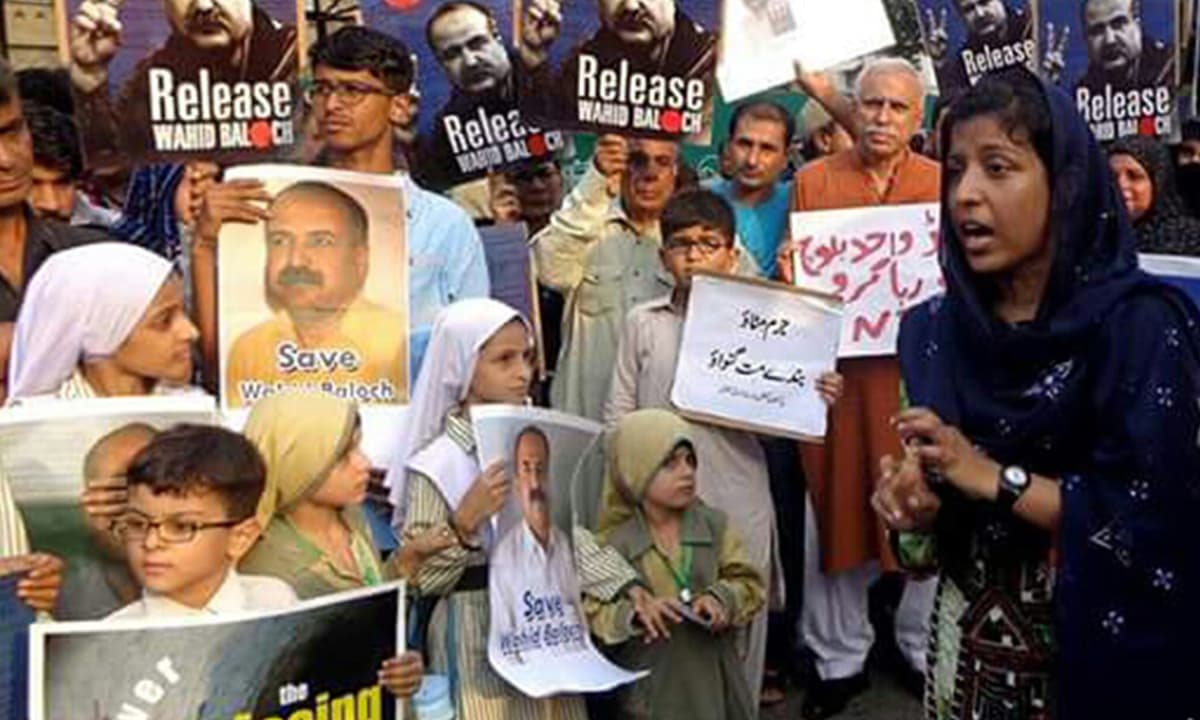 A public sphere discourse regarding missing persons is shrouded in layers of legal complexities, a biased national security and law and order narrative, and projected murky details about the backgrounds of the persons picked. On the family’s part, there is a constant fear of untoward consequences for the missing, confusion regarding the legal course of action and an on-and-off glimmer of hope over ‘his return someday’.

The family’s daily life, after the forced departure of their loved one, is characterised by struggles to arrange resources to meet household expenses, psychological trauma of the aftermath of the disappearance, series of illnesses attacking the more vulnerable family members such as the elderly and the children, and also dealing with the negative social attitudes mainly arising out of media propaganda against the missing person. Another everyday reality is phone calls from an “unknown” number, forbidding the family to participate in public activities to campaign for the release of the abducted.

An activist of the Pakistan Fisherfolk Forum, Saeed Baloch, who was earlier picked up by the Pakistan Rangers in January 2016 – his arrest was not declared for over a week – had a sustained misleading media campaign run against him soon after his disappearance. His photos would be flashed across TV channels with a caption screaming “RAW agent arrested”. His activist friends recall that even the name posted next to his photo was incorrect. His wife remembers the whispers she would overhear as she would step out of her house in Karachi’s Lyari area. “Life was constantly a struggle between hiding newspapers and TV tickers from my 16 and 9-year-old boys and responding to people who would mock me on the streets using newspaper items’ references.” She still experiences the same rage when she talks about the six months of Saeed’s detention, declaring the media’s conduct as extremely irresponsible and anti-people.

In the wake of the law enforcement agencies’ – police, Rangers and intelligence agencies – choice to remain ambiguous and arbitrary about the practice of detentions, a black market has surfaced that seeks to exploit distress. This is manifested in the demand for bribes in exchange for information and even help with the release of the victims. Naeem Haider’s family angrily mentions 50 million rupees being demanded for his release. “We had to turn to the court to get orders for filing one.”

Families that do turn to legal recourse find a little respite. The police put up fierce resistance against filing an FIR. If the matter reaches court, the cases keep getting delayed due to one procedural reason after another. Those whose arrest is made public are quietly handed over to the Rangers for a 90-day remand without any question. In one of the hearings witnessed last month, distressed family members of a resident of Gulberg in Karachi who was picked by unknown persons while enroute to Gulshan-e-Iqbal shared how the police from both Gulberg and Gulshan-e-Iqbal refused to register an FIR citing jurisdictional matter, owing to lack of information about the exact spot from where he was picked. The court had to eventually order the Gulberg police to file the FIR.

Journalist Ali Arqam, who follows cases of missing persons, is of the opinion that their return is dependent on public pressure over the case. Advocate Ali Palh, who provides legal assistance to families of missing persons, notes that the filing of an application with the UN Working Group on Enforced Disappearances is useful as they pressurise the state to address the matter.

However, family members of detained persons have very limited awareness of such mechanisms. They mostly rely on press conferences, rallies and media interviews to mobilise support for the release of their detained family members. These, for some, can be costly methods. The family of octogenarian Ustaad Rahimon, who was picked in Badin last year and released two months later, ended up selling their livestock and essential household items on top of borrowing at 10% per month interest rate to visit Karachi to participate in protest rallies.

Those who returned and were willing to talk while wanting to stay anonymous also shared how they would be forced to name people suspected of being involved in “anti-Pakistan” activities. One elderly individual shared that he was picked because he was falsely named by another detained person for being “a RAW agent”. Once the security agencies realised that it was a case of false identification, he was released.

Families of the missing persons and those who return often give in to the fear of consequence when they turn down the option of pursuing a legal remedy or public outcry over their-treatment by the state. However, this in no way suppresses the anguish they feel. Marvi Sario could not help her frustration at the fanfare with which the 70 years of Pakistan were celebrated 10 days after her father disappeared. “Why would I want to participate in the celebration of a place where my father has been given such rough treatment?”

The original article was published on the Herald. Read the original here.