Amazon needs to “tender an unconditional apology” and then “withdraw all products insulting our flag immediately,” the minister had said. 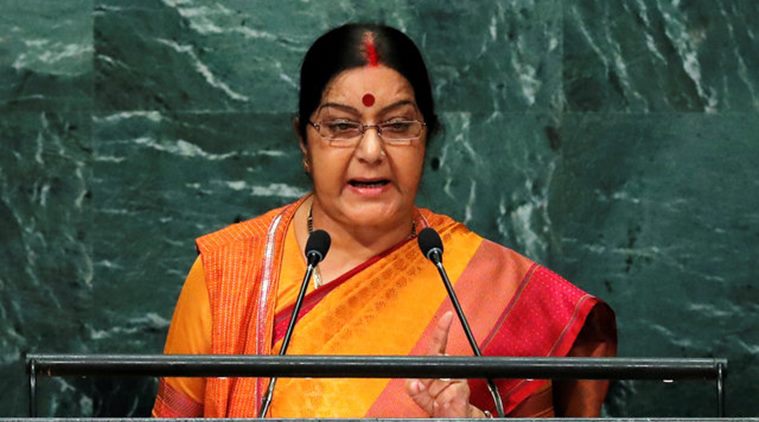 New Delhi: Amazon has withdrawn doormats resembling the Indian national flag from its Canadian website, after external affairs minister Sushma Swaraj on Wednesday warned the online retail giant that if it did not stop selling those products, the ministry would revoke visas granted to the company’s officials working in India.

On Wednesday evening, a Twitter user named ‘Atul Bhobe’ tweeted out to the foreign minister with a picture that showed that a wide variety of doormats were up for sale on Amazon’s Canada website, with several products showing a doormat in the shape of the Indian flag

Swaraj, who is widely known for quickly responding to diplomatic issues and the problems of Indian citizens living abroad over Twitter, was no less efficient in responding to Bhobe’s concerns.

If this is not done forthwith, we will not grant Indian Visa to any Amazon official. We will also rescind the Visas issued earlier.

In a series of tweets, the minister reprimanded the online retailer by first asking the Indian high commission in Canada to help in the matter by “taking it up with Amazon at the highest level”. In following tweets she noted that Amazon needed to “tender an unconditional apology” and then “must withdraw all products insulting our flag immediately”.

In a parting shot, Swaraj warned that if Amazon didn’t take action, their company officials and executives working in India could lose their visas. “If this is not done forthwith, we will not grant Indian visa to any Amazon official. We will also rescind the visas issued earlier,” she said.

Her stand drew praise from Tarun Vijay, former Rajya Sabha MP for the Bharatiya Janata Party. “Amazon will hv to regret,” he tweeted. “No other way for these firangs” (i.e. whites).

@SushmaSwaraj is a warrior. Amazon will hv to regret. No other way for these firangs

It should be noted that Amazon Canada and Amazon US, which function largely as online marketplaces, also sell doormats in the shape of the American, British and Canadian flags. Therefore it isn’t restricted only or specifically to the Indian flag. Furthermore, there are a number of other products that also appropriate the image of the Indian flag. These include toothpicks in the shape of the Indian flag – for many, the idea of anyone cleaning their teeth with them is as insulting to the national flag as wiping their shoes on the doormat– as well as mini boxing gloves and even a PS4 video game controller. It is not clear if these have also been brought to Swaraj’s attention.

Amazon on its part sent a letter to Swaraj on Thursday, telling the minister that the product in question had been taken down, saying “to the extent that these items offered by a third-party seller offended Indian sensibilities, Amazon regrets the same”.

Amazon’s operations in India are headed by executive Amit Agarwal. The e-commerce giant, when it launched in India in 2014, promised a $2 billion investment and later revised that upwards to a whopping $5 billion in mid-2016.

Industry experts feel that the company’s aggressive India foray has put domestic competitors such as Flipkart and Snapdeal on the backfoot. In fact, at a technology conference in Bangalore in early December, Flipkart founder Sachin Bansal joined a number of other Indian entrepreneurs and raised a call for more protectionist policies for Indian start-ups.

We need to take a “more India-centric approach” to regulation, he had told the audience. Bansal also cited China’s approach towards US technology companies such as Amazon as an example.

“What we need to do is what China did and tell the world we need your capital, but we don’t need your companies,” he said.

Amazon and domestic e-commerce companies also clashed earlier in 2016, when FDI rules for e-commerce were released. At the time, many analysts saw the rules as helping Flipkart and Snapdeal stay the spending power and deep pockets of Amazon.

Amazon on its part has quickly responded over Twitter, telling Swaraj that the Indian flag doormat products were “never sold on Amazon.in”. Amazon.in does, however, sell doormats in the likeness of the Union Jack.  A questionnaire has been sent to Amazon India officials and this story will be updated as and when the company sends a statement.

Swaraj is currently confined to her residence to recover from a kidney transplant conducted last month. But even in hospital before and after her operation, she has not let her health impair her presence on Twitter – for which she has earned kudos from netizens.

Foreign Policy magazine listed her as one of the “2016 Global Thinkers” only on the strength of her so-called “Twitter diplomacy”.

More than diplomacy, Swaraj has been using Twitter to address concerns from Indians, persons of Indian orgin and even foreign nationals on matters which relate to the Ministry of External Affairs, likes visas, passports and other consular matters.

But her accessibility on social media means that she is also tagged on other extraneous issues, which do not pertain to her ministry.

Recently, a Pune-based IT professional learned that complaining to Swaraj that his wife in the rail ministry was not getting a transfer was not a good idea. Swaraj scolded him for requesting transfers on social media and tagged the railway minister Suresh Prabhu, who promptly asked the railway board to conduct an inquiry.

That incident had led to some disquiet on whether the minister should be using Twitter to address issues which should be handled at the level of embassies and the MEA helpdesk.

The role of a minister is not to distribute visas & such as a largesse but to set policies which make the process as seamless as possible.

Note: The article has been updated to reflect Amazon’s response.