Today, the battle to open and close schools is as fierce as ever, as the US-backed government under President Ashraf Ghani struggles to fend off an insurgency dominated by the Taliban. 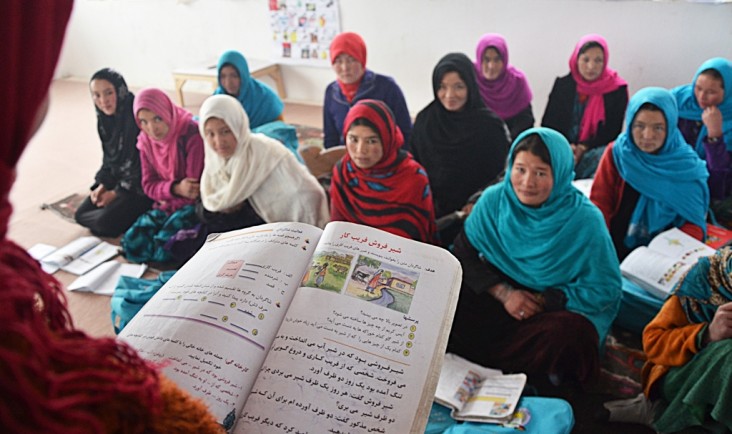 In a speech at the reopening of Kabul University in 1993, in the midst of a bitter civil war, Abddul Ali Mazari, founder of the Hezb-e-Wahdat political party spoke out on a conundrum that had been occupying his mind for some time.

He quoted four famous Hadis (sayings) of Mohammad the Islamic prophet, who had emphasised the importance of education for all, including women. Then, he claimed to be puzzled that, despite those words, the majority of Muslim clerics still opposed school and university education, especially for females.

Ali Mazari was speaking not long after the Jihad against the USSR’s attempted occupation of Afghanistan, that saw some mujaheddin resistance commanders kill government-paid teachers and close down schools in the areas they controlled.

Today, the battle to open and close schools is as fierce as ever, as the US-backed government under President Ashraf Ghani struggles to fend off an insurgency dominated by the Taliban with other radical groups like ISIS also operating in the country.

From communist compulsion to donor dependencies

Around half of Afghanistan’s 36 million population is younger than 18. At present, more than 9.2 million children are enrolled in schools of which 39% are girls, according to the Afghan Ministry of Education. With Afghanistan still mired in insecurity and corruption, the emergence of both public and private schools is one of the few development gains that have followed from the 2001 US-led invasion of the country.

Since 2002, the Pentagon, State Department, and the United States Agency for International Development have spent a total of $759 million on primary and secondary education in Afghanistan, with other donors making smaller contributions.

Although the Taliban, for the most part remains categorically opposed to both US assistance and female education, other armed factions loyal to regional power-brokers have shifted their stance in line with changing attitudes to education.

Schools and universities have traditionally been free of charge in Afghanistan. When in the 1980s the brutal and widely-hated pro-Soviet government made education compulsory for all children, some families took to bribing education officials in exchange for not admitting their children into schools. They argued that a school education could turn their children into nonbelievers.

However, after 2001, some parents began not only sending their children to public schools, but also seeking out fee-paying schools where their children might get a better education.

Symbolizing the extent to which education has become a battleground in domestic politics was Ghani’s own victory in the tightly fought 2014 presidential election in 2014.

As the election entered the second round, Ghani’s campaign drew criticism from the campaign of opponent Abdullah Abdullah for styling himself as the candidate of education and depicting Abdullah as synonymous with warlordism.

Corruption, religion and the rise of the madrasa

Corruption remains deeply rooted in public education, especially at the top of the food chain. Two years ago the US Special Inspector General for Afghanistan Reconstruction (SIGAR) watchdog disclosed that Farooq Wardak, education minister during President Hamid Karzai’s second term in office (2009-2014) had been embezzling money allocated for state schools that did not actually exist.

Ghani’s administration refused to launch any investigation into the allegations and later appointed former minister Wardak as a presidential adviser.

The development of private schools in turn has been hampered by heavy government taxation as well as restrictions that force the schools to teach only the state curriculum. That curriculum remains strongly influenced by Islam.

The communist-backed government of the 1980s removed religious text books from school curriculum, an unpopular move that the subsequent mujaheddin government quickly reversed.

Under the Taliban, which had consolidated control over the country by 1996, religious texts thoroughly dominated class time.

Presently, students receive an average of two hours of religious instruction based on Koranic teachings regardless of their religious beliefs, while religion also pervades other subjects, such as history and literature.

This continues into university, where Saqafat-e-Islami (Islamic Culture) is a compulsory subject in all eight semesters of a four-year bachelor degree.

Last year, Abdul Hafiz Mansor a member of Afghanistan parliament worried that, “Saqafat-e-Islami produces extremism and terrorism in the universities”. His speech won approval from many social media users.

A mixture of poverty and conservatism explains why many people choose to bypass the state curriculum entirely and send their children instead to generously-financed free-of-charge madrasas (Islamic religious schools).

These madrasas, whose funding sources are rarely known but are widely believed to be bankrolled by wealthy businessmen in the Arabic Middle East, attract huge numbers of students.

According to a report by Voice of America there are 1,200 registered and 13,000 unregistered madrasas active in the country. The hapless central government in Kabul is too weak to oversee them.

Some of these institutions are thought to teach fundamentalist curricula, while graduates of most madrasas are typically ill-prepared for jobs beyond the religious establishment, a factor that plays into the hands of the Taliban.

The battle over education, then, is a long-term and strategic one in which two very different visions for the future face off.

For children studying across Afghanistan, the question is not only one about the kind of institution they graduate from, but a broader one about the type of society they will graduate into.