A Sting to Legitimise the Theft of Palestinian Land 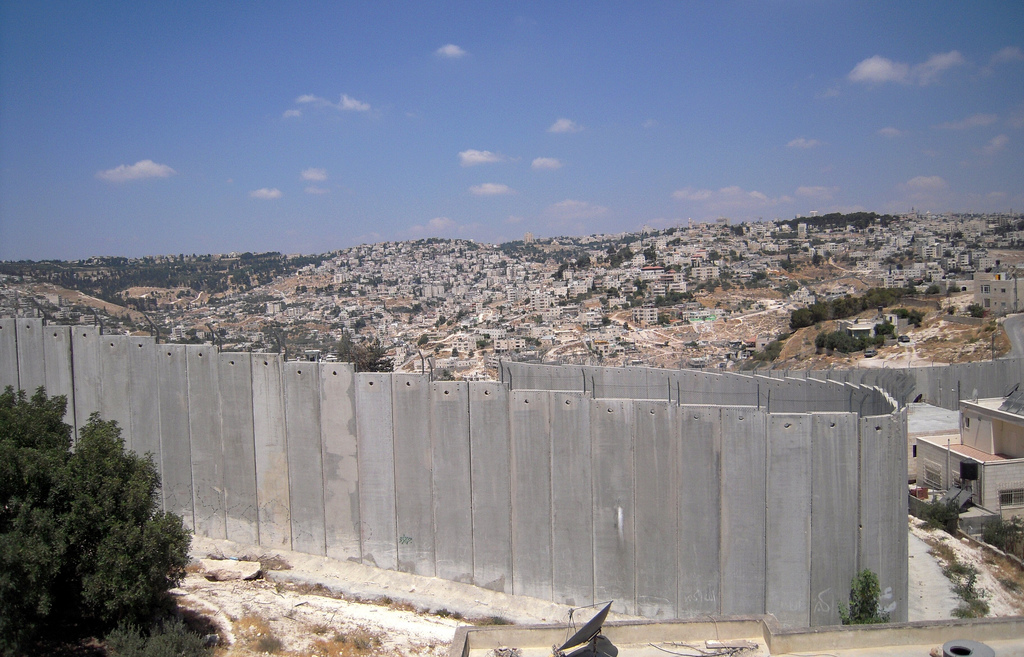 Israel's Apartheid Wall: The "separation barrier" is ostensibly a security measure, to protect Israeli Jews from suicide bombings and other terrorist acts. In fact, tens of thousands of Palestinian Arabs reside on the other side of the wall. And the Jewish settlement of Ma''ale Adumim (pop. 35,000) is on the side of the wall from which the photograph was taken. Credit: Ted Swedenburg/Flickr CC 2.0

Many of you know by now of the difficulties Ta’ayush – the Arab-Jewish partnership organisation –  is facing in the wake of last week’s broadcast of the “Uvda” muck-raking show on Channel 2 of Israeli TV.

Ta’ayush had the dubious honour of being the subject of “Uvda’s” 600th instalment. Directed by Ilana Dayan, “Uvda” has in the past done good work, exposing serious problems within Israeli society. Sadly, the installment on Ta’ayush fell far short of her usual standards, and significant damage has been done.

For whatever reason — one can assume Channel 2 is under pressure from the government to provide negative coverage of the Israeli left, or what remains of it — the broadcast based itself exclusively on materials collected by “moles” or “spies” from the extreme right who planted themselves, or were perhaps planted by others, in the ranks of Ta’ayush. They come from a shadowy organisation called “Ad Kan,” “This Far.”

In their own eyes, these young people are James-Bond like heroes who penetrated the enemy citadel of the left, taking great risks. In truth, nothing in the world could be easier than to find one’s way into Ta’ayush: volunteers are welcome each week, no questions asked. In the present case, the main “mole,” who called himself Itzik, did arouse suspicion among several of the activists. They smelled a rat, and they were right. Ezra Nawi, on the other hand, who has played a central role in all our activities over the last 15 years, took this Itzik in to his far-too-generous heart, suspecting nothing. Over many months, Itzik traveled with Ezra, filming him surreptitiously with the aim of turning up something he could use against Ta’ayush and against Ezra personally.

Before I go on, it is important to know that Ezra Nawi has and for years has had enemies who would stop at nothing to harm, even kill, him. I myself witnessed violent attacks on him by armed settlers at Twaneh, Susya, and Chavat Maon. One memorable moment occurred one night when settlers from the Israeli settlement of Susya laid down water pipes on Palestinian lands, thereby asserting a claim to these lands; Ezra discovered this and, with characteristic courage, rushed to the site, where raging settlers surrounded his car and threatened to kill him. By a miracle he emerged unhurt. We can take it as an axiom that the settlers of South Hebron, the Occupation authorities, and to some extent the police and occasionally army officers serving there see Ezra Nawi as a major threat to their primary goal, that is, the theft of Palestinian land by any and all means. They hate him.

The importance of land

For good reason. If today the Palestinian civilian population in South Hebron is still in place on some fragment of their historic lands, much of the credit goes to Ezra. He taught us, years ago, the theory and practice of non-violent resistance to wickedness, in our case to the devastating evil of the Occupation system. Over the years, applying the classic methods of Martin Luther King and Mahatma Gandhi, among others, we have been moderately successful in restoring Palestinians lands that were stolen by settlers and the state to their rightful owners. We have not been able to change the political reality of the Occupation — that is beyond the power of a small group of committed volunteers — but we have made a difference to the lives of thousands of innocent Palestinians. Those of you who have read my reports over the years know how this is done and what it means. Ezra’s personal contribution has been immense. I see him as a heroic figure, an ordinary man doing extraordinary things without fuss or pretense. That does not mean that he is, God forbid, a saint.

Now let us go back to the “Uvda” program and the scenario it presented. Eventually — probably not by chance — a moment came when the mole got his wish. A Palestinian man telephoned Ezra (in the presence of the mole) and tried to seduce him into furthering some shady land deals involving the sale of Palestinian land to settlers. Such land-sharks exist and have existed since the very beginning of the Zionist project. They are considered the lowest of the low in Palestine, and selling land to the Jews is usually seen as the worst crime a Palestinian can commit. There was a time, over ten years ago, when such men were executed inside Palestine. I’m not condoning this in any way. But you have to remember that the whole violent conflict is about land, and many Palestinians have lost everything they had to the settlers through Israeli government-supported chicanery and the violent, predatory regime of dispossession and expulsion, the one and only purpose of the Occupation.

On the “Uvda” program we saw footage, secretly filmed by the spy, in which Ezra says he intends to turn the so-called land-dealer over to the Palestinian security authorities who, he says, are likely to torture and kill him. Whether Ezra acted on this supposed intention or not, we don’t know. But he was certainly wrong about the facts. As I have just said, for the last ten years there have been no executions in Palestine; and if the Palestinian security forces torture people, usually their political rivals, they probably do so at the behest of their Israeli counterparts in the shadowy world of intelligence and security cooperation. At no point, apparently, was the land-dealer, if that is what he really was, in any real danger. What is more, if you look coldly at the story as I’ve described it, it’s hard not to see it as a deliberate sting operation set up from the start to trap and discredit Ezra Nawi. It’s possible that the treacherous and self-glorifying moles planted by “Ad Kan” were not acting on their own initiative, though we shall never know.

The trap closed around Ezra, and he helped it close by speaking foolishly and unacceptably, by any standard. No one among us would knowingly send a person, however corrupt and crooked, to his death. No one – including Ezra Nawi. I assume he regrets every word, and I think he probably never meant those words even when he uttered them. Perhaps he meant to impress the young man beside him. I can’t say. Speaking for myself, I of course cannot excuse what Ezra said. I know the man well, and I think I can say that I know him for what and who he is. For years he has faced—often singlehandedly—a system which sends soldiers every day to steal and seal off Palestinian land, and which regularly terrorises and sometimes kills Palestinians, all too often in the absence of any credible threat.

Another thing to bear in mind is that in cases where lands are being sold like this, Palestinian owners have no other recourse than to go to the Palestinian Security forces. They most certainly cannot turn to the Israeli authorities who, as we know, are themselves deeply implicated in the entire project of land-theft and dispossession. Ezra has said, not implausibly, that he felt the “land-dealer” was aiming at discrediting him in the eyes of the Palestinians of South Hebron, and that he had to act to protect his name. It nonetheless remains the case that he spoke, as we saw on the videotape, in a manner unworthy of his true character. I have seen his astonishing dedication and courage time and again, over fifteen years. That doesn’t mean he cannot make a mistake.

From its inception, the hallmark of Ta’ayush has been its manifest integrity in word, thought, and deed. We speak the truth and we act in the spirit of truth, resisting oppression and systemic wickedness with our bodies and our minds. We have no secrets, and we have nothing to hide. At the moment, our enemies — and they go up to the highest levels of the government and large sections of the Knesset — have been indulging in a furious witch-hunt against all the Israeli human-rights organisations and the still surviving remnants of the Israeli peace camp. It is in our enemies’ character to act like this, in a manner characteristic of anti-democratic, tyrannical regimes familiar to us from around the world. They will no doubt do what they can to crucify Ezra Nawi. We in Ta’ayush will continue to resist them and do our best to make sure the world, inside and outside Israel, knows what is really going on in South Hebron.