In an interview with Karan Thapar for The Wire, Shivshankar Menon also spoke about the future of India-US relations under President Joe Biden and Secretary of State Antony Blinken.

One of India’s most highly regarded China experts and former National Security Advisor has said the disengagement and withdrawal of Indian and Chinese forces on both banks of the Pangong Tso Lake is “potentially very significant but it’s only a first step and it must include more areas and become bigger”. Shivshankar Menon, who also served as a foreign secretary and ambassador to China, says “these are early days and there is a long, complicated process that still lies ahead”. At this point, he says, “we must not draw any big conclusions”.

In a 40-minute interview to Karan Thapar for The Wire, Menon said just as we do not know why the Chinese intruded into Indian territory at several different points in Ladakh last year we also do not have a clear idea why, after months of intransigence, the Chinese have agreed to withdraw.

Menon, therefore, agreed that defence minister Rajnath Singh’s statement in parliament that “we have not conceded anything” is not correct. In terms of territory no concession has been made, but in terms of patrolling both sides have made matching concessions.

Speaking about the south bank, Menon said that he could only judge India’s decision to militarily withdraw from the Chushul Heights and Kailash Range once he knows what – or if anything – China has agreed to do in response. Till then, however, he agreed there are question marks about this withdrawal by India on the south bank.

Speaking to The Wire about former defence minister A.K. Antony’s claim that the buffer zone at Pangong Lake is entirely on Indian territory and something similar happened last year at Galwan, Menon said most international observers, relying on satellite and other intelligence, do believe China advanced into territory India previously patrolled or controlled and, therefore, this retreat does suggest this is a classic case of two steps forward one step back, which leaves China with a net gain of one step. Menon said he too believes this to be the case.

Speaking about buffer zones, Menon told The Wire this is a sensible measure which would reduce the risk of mistakes and accidents.

Also read: ‘Chinese Behaviour Has Been Very Different From Anything in the Past’: Former NSA Shivshankar Menon

In the interview to The Wire, Menon said that of the Chinese intrusions where withdrawal is yet to be agreed – Hot Springs and Gogra as well as Depsang – the one at Depsang would be more tricky to negotiate. This is because China is more interested in the Depsang area and has also tried on several earlier occasions to change the status quo. He called the Depsang area sensitive and strategic territory.

Menon said that if over the next few weeks full disengagement happens and the two armies withdraw to the positions they occupied last year there would still need to reset the relationship. He said: “There should be no going back to the old relationship. We can’t ignore what the Chinese did and now say all is normal again.” Menon told The Wire that “it will take complicated and difficult conversations between the two sides to establish the new relationship”. He added that this new relationship would depend upon China “proving its sincerity”.

Speaking to The Wire about the impact of India’s problem with China and the way the Indian government handled it on the country’s image in South Asia, Menon pointed out that although governments are always polite, the media in Bangladesh, Nepal and Sri Lanka have published very different versions compared to the Indian version of the problem.

However, Menon said if India played its hand correctly China’s influence in Nepal, Sri Lanka and Bangladesh would not exceed India’s. However, a lot depends upon India’s handling of these relationships and, he pointedly added, “don’t call them termites”.

Menon said concerns about India facing a two-front situation or the belief that China is a greater worry than Pakistan, do not call for re-engaging with Pakistan. Menon, who has also served as the high commissioner to Pakistan, disputed the belief that Pakistan is obstructing the bigger role India wants to play in Asia and internationally by drawing India back into South Asia and limiting the way India is perceived. He said India must not be obsessed with Pakistan and only India’s own behaviour can restrict it within South Asia and limit its international perception. 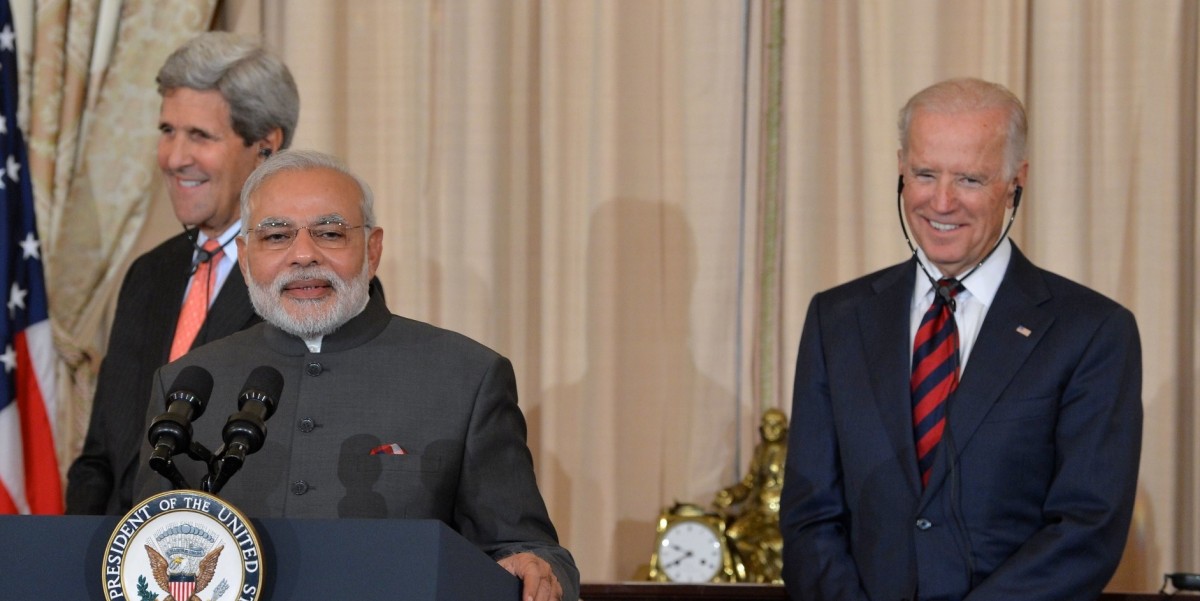 Joe Biden and Narendra Modi during the latter’s visit to the US in 2014. Photo: US Department of State

In the interview to The Wire, Menon also spoke about India-US relations now that Joseph Biden has become the new President of America. He said: “We don’t have to be high on his priorities but we do nonetheless fit into his priorities”. Menon identified some of these as climate change, the Indo-Pacific, the continuing concern with China and the QUAD.

Menon described Joseph Biden as the best informed president ever about India. Speaking about the new Secretary of State, Antony Blinken, who was America’s deputy national security advisor when Menon was India’s NSA, he said: “We have met and worked together. He is a thorough professional. He has an open mind.”

Menon told The Wire that under Biden the unpredictability of the Trump presidency is over. He also said the lack of process and lack of structure under Trump will end.

Menon told The Wire he was not worried President Biden might raise concerns about India’s treatment of Muslims, Kashmir, NGOs and the media, all of which, both at home and abroad, are perceived as Modi’s Achilles heel. Menon also dismissed commentary in western newspapers, including, most recently, Time magazine, that President Biden might be under pressure to exclude India from the forthcoming Summit of Democracies he proposes to hold.