A 29-year-old researcher Parveen Farzana Absar discovered a new species of cave-dwelling crabs in one of Meghalaya's many natural caves. 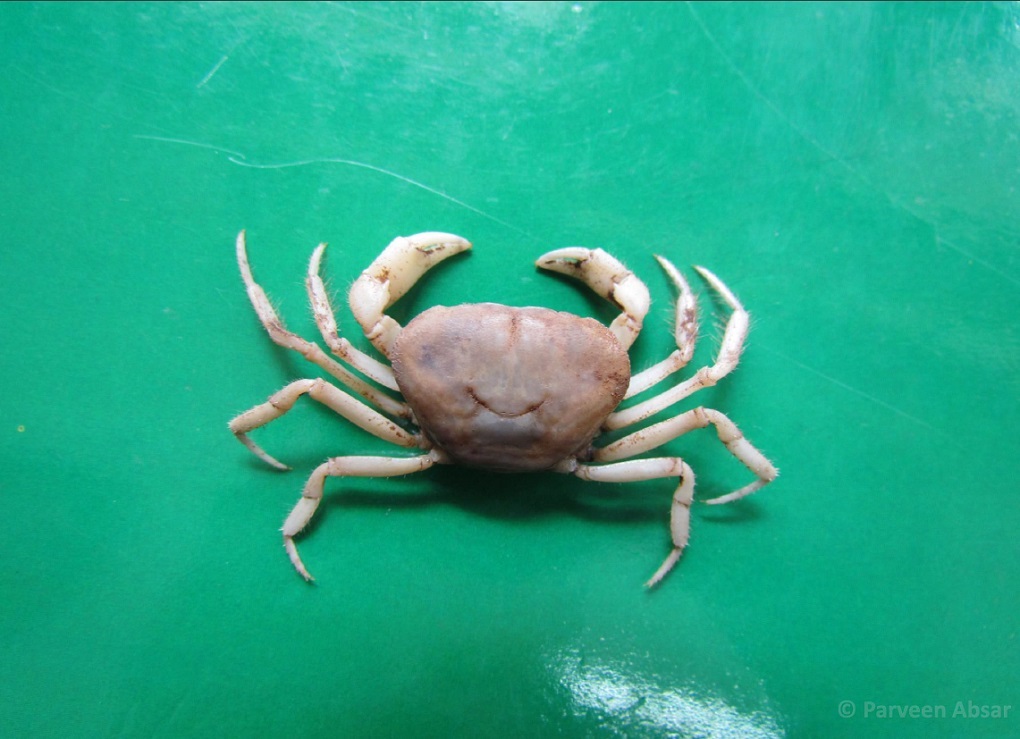 Less known is the fact that Meghalaya also boasts some of the world’s longest natural caves and it is in once such cave that these tiny creatures were discovered by 29-year-old Parveen Farzana Absar. Absar is pursuing a masters in wildlife sciences from Aligarh Muslim University and was researching cave biology in the east-Jaintia hills at the time of discovery.

The crab she found is albino, almost blind and lives in dark crevices of the caves with the adults reaching a tiny size of just 2 centimetres.

“These species have adapted to the dark environment of cave… So this crab is almost blind and without colour,” Absar said. She also noted that unlike other crabs the thin and slender legs of the albino crab have hair on them. 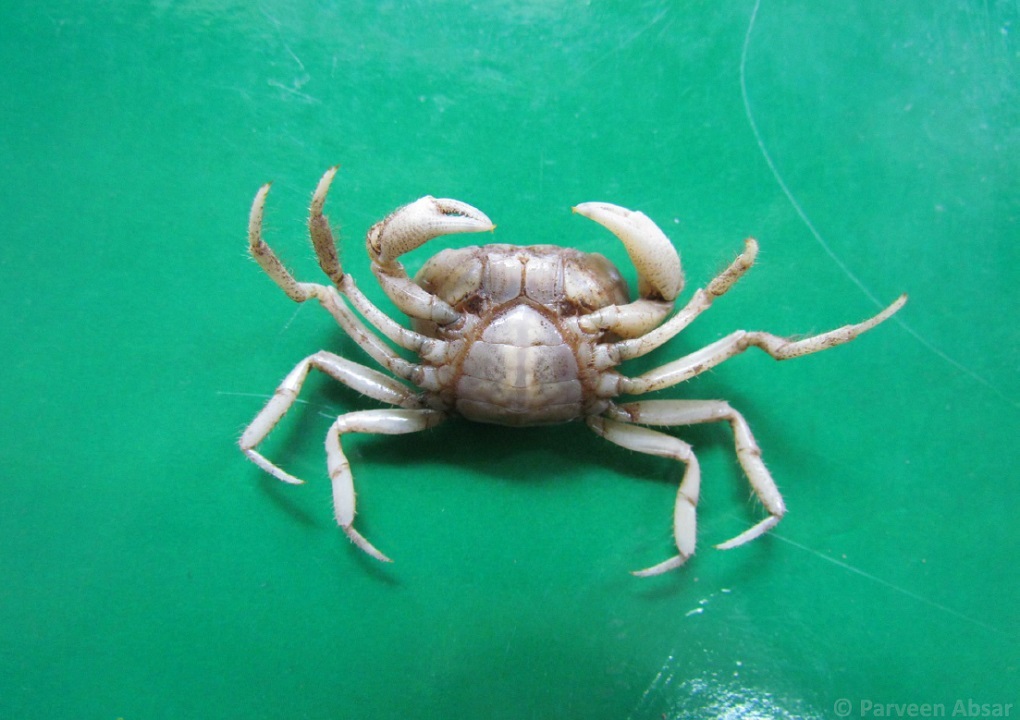 An underside view of a female crab, note the hair on the legs. Credit: Parveen F. Absar/Village Square

Recounting the moment when Absar found the new species just 200 metres from the mouth of one of the longest caves in the country [the name and location of the cave are being kept confidential at the request of the scientist], she told thethirdpole.net, “After my routine exploration, when I was on my way out, I saw these small shiny things and I picked them up and saw that they were crabs. I found a male, a female and a baby crab. I think finding a male crab was really a big thing and I was very fortunate because chances of finding a male specimen are very low. In my 11 years of experience, I have never seen such crabs.”

The young scientist instantly knew that there was something special and different about the crabs and submitted the specimen to Zoological Survey of India in Kolkata, where scientists confirmed within days that it was indeed a new species which is now believed to be from the genus Teretamon. This is only the third species discovered so far under this genus, the first one was found in Myanmar and the second one was found in the Indian state of Mizoram but both the previous species were either forest or freshwater species unlike this one that dwells in caves. The discovery is listed to be published in Zootaxa – the ultimate peer-reviewed science journal for taxonomy.

Absar who has been asked to name the species has thought of calling it Teretamon absarum based on her family name as a tribute to her parents. 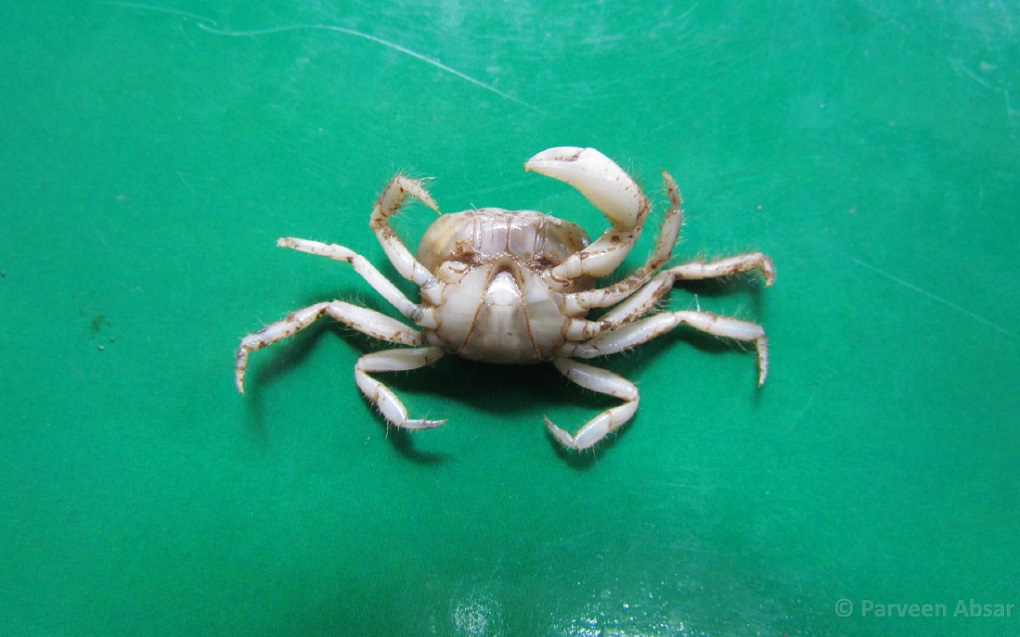 The male of the species is slightly smaller, and this one has one claw missing. Credit: Parveen F. Absar/Village Square

Orus Ilyas, an assistant professor at Aligarh Muslim University in the Wildlife Sciences Department, under who Absar is doing her dissertation, told thethirdpole.net,  that Absar was amongst the youngest discoverers of a new species, which is an honour for the state, as well as the country. She added, “She didn’t have funding to carry out her research, yet out of her sheer interest in the cave ecosystem, she did it on her own.”

Talking about the secretive, magical world of cave biodiversity Absar said, “Fauna in caves is very small, peculiar and tough to explore.” These caves are just not about crabs.  “There are fish, shrimp, spiders and millipedes as well but they are microscopic and transparent. Often they [millipedes] look like veins moving on rocks to the naked eye.”

Meghalaya has a dense network of over 1600 caves. Many of them hold secrets of earth’s past, and may give us vital clues of the evolution of particular species, and may also hold other surprises in yet-undiscovered species.

Shardul Bajikar, the former director of Sanctuary Asia magazine who now runs his own magazine Adventure Sports and Beyond told thethirdpole.net, “We explore different things like land ecosystems, marine ecosystems, high altitude ecosystems and have reasonable information [about them], but this [the cave ecosystem] is one dimension of the earth which we have not explored especially in India.”

These caves can also be a storehouse of well-preserved records of climate change. Its limestone features can throw a mine of information of past climatic events in chronological order.

Meghalaya’s network of caves sprawls over Jaintia, Khasi and Garo Hills districts and has nine of the ten longest caves in the country, running up to 30 kilometres in length. Exploring them is not an easy task. Given the tough terrain, labyrinths, streams and rivers, speleology is a physically demanding activity.

Bajikar who is also organising a caving initiation expedition this year in Meghalaya said, “Over the last decade, a few Indians [mostly from the Meghalaya Adventurers’ Association, and a few from Allied Petzl and the Indian Navy] and other foreign cavers have been organising expeditions to explore and document these hidden treasures of the vast and intricate cave systems of Meghalaya. As on date just over one thousand caves have been explored and mapped yielding a total mapped cave passage of over 455 kilometres. This initiation expedition is probably the first attempt to introduce caving as a technical discipline to a small select group of adventure lovers to increase our numbers.”

But threats loom large on these geological wonders and biodiversity-rich caves. Unrestricted development, limestone mining, rat-hole coal mining, exploitation by visitors, and the dumping of garbage are taking a toll of these caves. Continuing neglect of these caves can ruin these natural treasures, and the knowledge they hold, long before they are revealed to the world.

This article was originally published on The Third Pole. Read original here.