World Wetlands Day: What Is a Wetland, and Why Does India Need so Many?

Wetlands are typically shallow so sunlight can penetrate the surface to facilitate subterranean photosynthesis, making these ecosystems one of the most biologically productive areas on the planet. 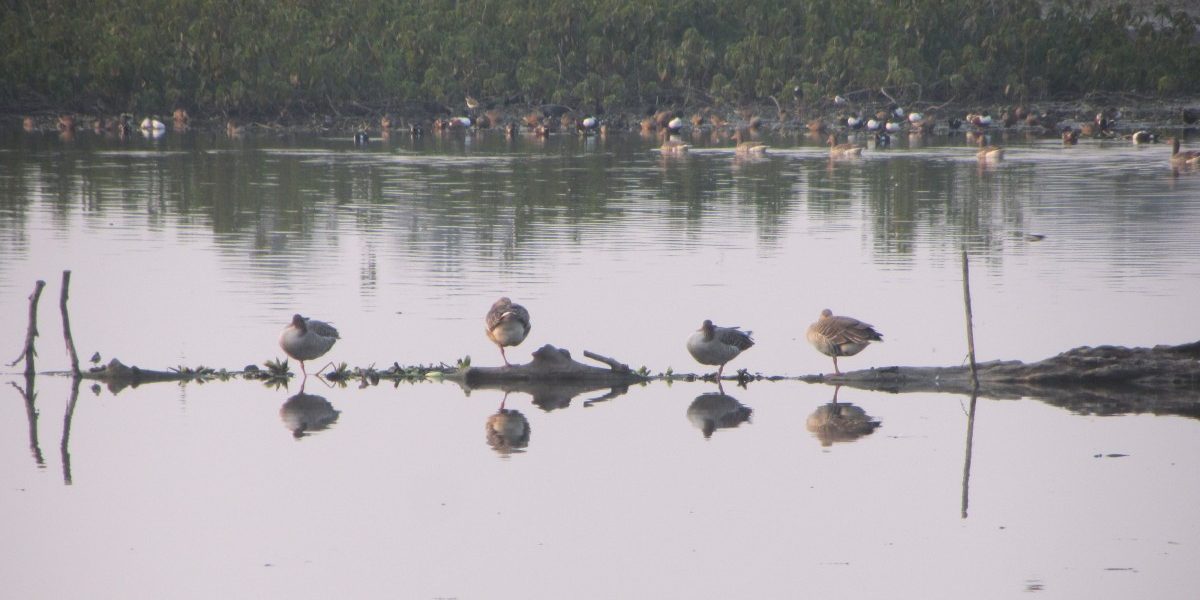 A view of the Surajpur wetland. Photo: Nivedita Khandekar

The bad news is that India’s cities have lost 25 ha of wetland for every one sq. km’s increase of built-up area in the last four decades.

The good news is that 10 more wetland sites around India have been added to the Ramsar Convention, rendering them sites of ‘national importance’.

Does this mean India gained in net or lost?

The country has over 757,000 wetlands with a total wetland area of 15.3 million ha, accounting for nearly 4.7% of the total geographical area of the country.

A wetland is an area of land that is saturated with water – either through the year or for varying periods of time during the year. Wetlands are typically shallow so sunlight can penetrate the surface to facilitate subterranean photosynthesis, making these ecosystems one of the most biologically productive areas on the planet.

India has 37 Ramsar sites now, covering an area of 1.07 million ha. After the announcement earlier this week, the Union environment minister Prakash Javadekar called the addition to the Ramsar Convention an acknowledgement of the government’s commitment to conserving and sustainably using the country’s important wetlands of the country.

Wetlands provide a wide range of important ecosystem services, such as food, water, groundwater recharge, water purification, flood moderation, erosion control, microclimate regulation, landscape aesthetics and, of course, livelihood opportunities. They are in fact a major source of water and the principal place from which India’s cities receive their freshwater.

However, increasing urbanisation has significantly reduced the amount of area under wetlands. A rapid assessment undertaken by Wetlands International South Asia (WISA) indicated that nearly 8% of India’s wetlands area was likely to be situated within an urban sprawl. The states of Uttar Pradesh, Tamil Nadu, West Bengal, Odisha, Andhra Pradesh and Telangana account for over half of all urban wetland area.

WISA’s most alarming finding from 22 cities was that between 1970 and 2014, cities have rapidly degraded wetlands, to the tune of 25 ha per sq. km of built-up area. The biggest offenders were the metropolitans of New Delhi, Bengaluru, Chennai, Mumbai and Hyderabad, which treat wastelands as their private dumping grounds.

According to the study, Mumbai has destroyed 71% of its surrounding wetlands, followed by Ahmedabad, 57%; Bengaluru and Greater Bengaluru, 56%; Hyderabad, 55%; and Delhi-NCR, 38%.

The 2011 edition of the National Wetlands Atlas of India classified India’s wetlands into 19 categories. Common ones include river, stream, reservoir, barrage, intertidal, mud-flat and natural lake; the more unique among them are lagoon, mangrove, coral, riverine and high-altitude lake wetlands.

Adding endangered wetlands to the Ramsar Convention is expected to help because it “mandates contracting parties to adopt National Wetland Policies, produce wetland inventories, conduct wetland monitoring and research, raise public awareness of wetlands and develop integrated management plans for wetlands sites” (source). It was signed on February 2, 1971; as of today, nearly five decades on, 171 countries have added 2,375 wetlands to the convention, covering 253.6 million ha.

Indeed, India isn’t alone in ceding wetlands to urban projects and uncontrolled urban expansion. A Global Wetland Outlook report published in September 2018 noted that the world had lost 87% of its wetlands since 1700:

“We lose wetlands three times faster than natural forests. Between 1970 and 2015, inland and marine/coastal wetlands both declined by approximately 35%, where data are available, three times the rate of forest loss. In contrast, human-made wetlands, largely rice paddy and reservoirs, almost doubled over this period, now forming 12% of wetlands. These increases have not compensated for natural wetland loss.”

At the same time, the problem’s prevalence doesn’t mean India or any other country isn’t blameless. The Indian scenario is especially bad because wetlands and water bodies are often the first recipients of municipal solid waste. For example, data collected by the convention’s administration indicate that the 4,000-ha Deepor Beel near Guwahati is threatened by pollution due to pesticide and fertiliser runoff, infestation by water hyacinth and – alarmingly – a state government proposal to dig a sewage canal directly from the city into the wetland.

“Many Ramsar wetlands such as Deepor Beel, and Kolleru Lake in Andhra Pradesh, are doing very badly,” Neha Sinha, a conservation biologist with the Bombay Natural History Society, said. The new Ramsar site additions “should be an opportunity to revisit their problems. Most wetlands are not notified as wetlands by the government. The new Wetland Rules 2017 say only those that are notified as wetlands will be protected. There is a great need today to notify and identify more and more wetlands by the states.”

Deepor Beel is in fact only a representative example, not an isolated one. For another, the Surajpur wetland is located about 50 km east of from Delhi. It covers 60 ha of land as part of a 300-ha reserved forest, and is home to 220 species of flora; 180 species of birds – especially of Sarus cranes and black-necked storks; 13 species of fish; 58  species of invertebrates (including butterflies, dragonflies, annelids, arthropods and molluscs); eight species of reptiles; and six species of mammals.

A National Green Tribunal order in September 2018 recognised the Surajpur wetland as such, and is today surrounded by high-rise buildings and an industrial area that the state government has been keen on ‘developing’. As a result, the wetland’s catchment area has been severely affected and the wetland itself doesn’t receive as much water as it needs. The government of Uttar Pradesh, in whose jurisdiction it lies, has constructed a drain to carry water overflowing from nearby canals as a lifeline – but with a caveat: the canal also brings untreated sewage and industrial effluents, which directly contaminate the soil as well as promote the growth of water hyacinth, a highly invasive species.

Vikrant Tongad, an activist who founded an organisation working on local and national environmental issues, said, “Apart from sewage and effluent entry, another of Surajpur’s catchment [areas] has six other wetlands ranging from half to five ha in area. We also want them to be notified to prevent further damage.”

Indeed, while the tribunal recognises the Surajpur wetland as a wetland, the Government of India is yet to notify its acknowledgment.

Ritesh Kumar, the director of Wetlands International, South Asia, said, “A notification under the Wetlands (Conservation and Management) Rules of 2017 can still be issued clarifying that the regulations will be governed as per provisions of the Forest Act.” If this is done, the Surajpur wetland will have a regulatory defence against its urban invaders.

But issuing a notification is just one of many things the government can do to protect wetlands (i.e., the government won’t have done everything can if it simply notifies a wetland). Wetlands also need a conservation management plan, and this is where most state governments fall behind. In the last six months, the Union environment ministry prepared a four-pronged strategy to restore wetlands, including preparing baseline data, wetland health ‘cards’, enlisting wetland ‘mitras’ (or ‘friends’) and preparing targeted integrated management plans.

As a form of assistance, the Centre also issued guidelines for state governments to better implement the Wetlands (Conservation and Management) Rules 2017.

“We conducted workshops and training [sessions], and ensured that state government officials came up with detailed project reports and management plans for all 130 wetlands,” Manju Pandey, joint secretary of wildlife at the ministry, told The Wire. “Now we are on to phase II with next set of wetlands.” She also said the Centre had issued its share of the funds for 2019-2020; it is bearing 90% of wetland-related expenses (as described in the integrated management plans) in the northeastern states and 60% of those in other parts of the country.

However, water in India is a state subject, which means if each state doesn’t cough up the remaining funds, the Centre’s plan will still flop. “We cannot take penal action; all we can do is monitor states'” progress, Pandey said.

Nivedita Khandekar is an independent journalist based in Delhi. She writes on environmental and developmental issues. She is on Twitter at @nivedita_him.