Will Bangladesh and India turn the Sundarbans into a Busy Shipping Lane?

The continuous, manifold increase in international, regional and inland shipping, through threatened wildlife sanctuaries and reserves poses a threat. 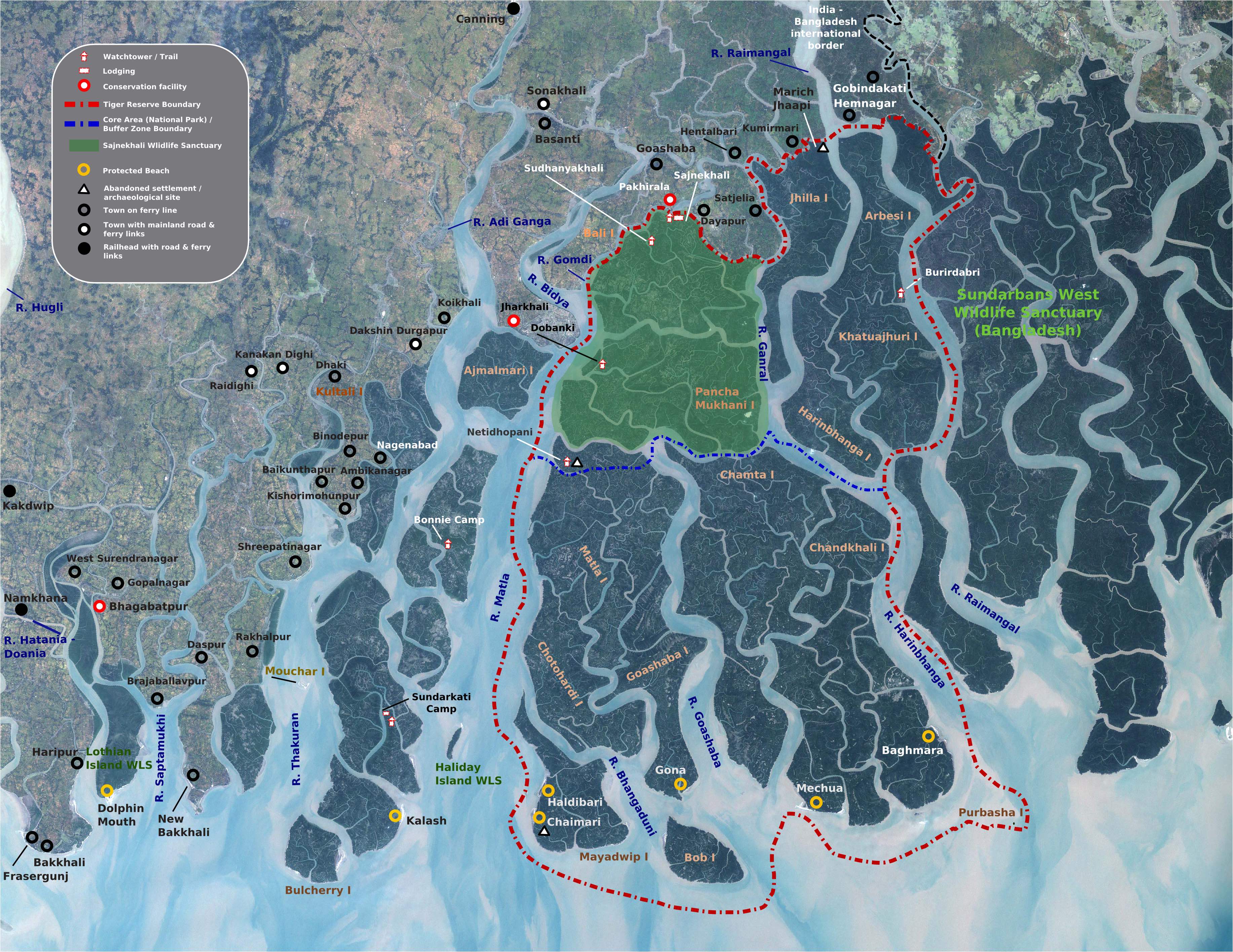 Shipping and navigation through the Sundarbans is booming like never before. Unauthorised navigation routes are expanding. The vessels range from ocean-going mother and feeder cargo ships,  container carriers, tankers, lighterage ships, mid-size bulk cargo and tankers from inland waterways, and trans-boundary cargo ships between Bangladesh and India. Without any sort of environmental management in place, this increasing navigation and shipping are multiplying the risk of accidents/spills and regular pollution in the world’s largest mangrove forest.

It was a quiet and cool at daybreak in the world’s largest mangrove forest – the Sundarbans – on December 28, 2008; amidst the morning mist, I was heading towards the wildlife sanctuary. I was tired and fell asleep on the deck as soon as the mechanised boat sailed, only to find myself rudely awakened, with a giant cargo ship before my eyes, its siren-sound in my ears.

From the master bridge, the cargo crew was shouting toward our tiny boat over loudspeakers. In response, our boatman was desperately explaining ‘something’ with a diverse range of sign languages, it seemed. The fact that we weren’t flying the Bangladeshi flag meant the cargo ship suspected us of being pirates.

In the middle of all this, I somehow managed to locate where we were. That’s when the question hit me: why is there a cargo vessel on the Arpangasia river, deep inside the forest?

Now, eight years after that face-off, in these times of controversy and protests against a coal-fired mega-power plant in the impact zone of the Sundarbans, the forest faces a very high volume of shipping and navigation every day. Data from the Bangladesh Inland Water Transport Authority shows a 102% increase in cargo carrying between India and Bangladesh through Sundarban waterways over the past 8 years. In 2008-09, a total of 9,44,422 metric tons of cargo was transported between India and Bangladesh under the arrangement of the Protocol on Inland Water Transit and Trade (PIWT&T); and in the last fiscal it was 19,12,526 metric tons.

The PIWT&T was first signed in 1972 and since then it has been continuing without any interruption. The latest renewal was signed on June 6, 2015. There are eight navigation routes permitted under this protocol, four among those are laid near the Sundarbans.

Officially, the acknowledged routes of PIWT&T are drawn along northern edge of the forest. However, during my participation in several learning trips throughout the last year I have found that the vessels use four major de facto routes laid through the river and canals of the reserve forests and wildlife sanctuaries. I have encountered vessels deep inside the forest and even in the Sundarban West Wildlife Sanctuary – which is also a UNESCO world heritage site – and on the  Arpangasia, Jamuna and Malancha rivers too. In the first half of 2015, on average of 228 vessels used these routes monthly.

This is because the de jure  routes have not been navigable since the late ’90s. On the other hand, data released by the Mongla Port Authority shows a 172% increase in the number of ocean going vessels over the past eight years through the Passur river. In the last fiscal, the total number of ocean-going vessels through this Sundarban stream were 889, while it was only 326 in the year of 2008-09. Exact data of shipping by domestic cargo ships is not available.

The Sela river, which runs through the sanctuaries for endangered Irrawaddy and Ganges river dolphin and along the northern edge of the Sundarban East Wildlife Sanctuary, has been under the spotlight since December 9, 2014, when a wrecked tanker released approximately 94,000 gallons of heavy fuel. The Sela oil spill brought devastating consequence for the mangrove habitat and wildlife. The shocking picture of oil-soaked birds and other megafauna  like dolphins successfully drew local and global attention to the danger of non-regulated navigation through a wetland of international significance as designated under the Ramsar Convention also.

The shipping ministry suspended navigation through the river, with huge press coverage in response, only to silently re-open it after a few days. During four days of observation in four different months of 2015 at the confluence of Sela and Passur rivers,  I have observed on average 17 ships are coming through. The inland shipping authority has not made public  any shipping data till date.

The question is, why does the Bangladesh government not spare the Sela river and wildlife sanctuaries by diverting the Mongla-port bound domestic vessels to the original port route – the Mongla-Ghashiakhali channel? It is because the agencies are failing to maintain the depth and navigability of the Ghashiakhali channel in the face of land grabbing by ‘influential’ shrimp businesses and other industries. Apparently, even a directive from the prime minister’s office failed to remove the shrimp farms and evict the land grabbers to permanently reopen the route.

Everyone said the devastations from Sela oil spill is an eye-opener for the responsible authorities, but after more than one and half years, it is clear that it was not. Just months after the accident two other wrecked vessels released tonnes of fertiliser and coal into the rivers in May and October, 2015 respectively. ‘Lot of ships will be coming, carrying so much coal’

Now, with the 1320-megawatt coal-fired power station, a joint venture by Bangladesh and India near the Sundarbans on the anvil, the National Shipping Corporation has started the process of procuring 16 new vessels to carry coal for the power plant. The mega plant will need an estimated 4.72 million tons of coal per year to be imported through Sundarban rivers. Beside combustion of coal in the forest’s impact zone, the power plant is going to aggravate the unsustainable industrialisation in the state-acknowledged ecologically critical area near the forest, and it will boost shipping on a larger scale.

This coal-fired mega power plant is going to be a deciding factor for the fate of Sundarban. For Bangladesh’s government, it is not about merely building a power plant close to or far from the mangrove forest. Prime Minister Sheikh Hasina in her latest briefing on this issue made it very clear that her government is determined to meet the growing demands of electricity for the country’s envisioned industrialisation. And this ‘Bangladesh-India Friendship Thermal Power Plant’ at Rampal is one of those coal-based plants the government has decided to install in different parts of the country to meet the growing electricity demand, she said. The government thinks coal is more suitable than petroleum, natural gas and other fuels in terms of availability and price. Moreover, areas close to the sea are best suited for building coal-fired plants because it reduces the shipping cost of imported coal, she added.

So, even though the government endorsed Environmental Impact Assessment report acknowledges some threats originating from the mega-project, it decided to carry on. The EIA states that the proposed jetty to unload coal in the Sundarbans, and shipping through the forest, will cause oil spillage, air, noise and light pollution.  An influential member of the ruling party and cabinet, finance minister M.A. Muhith recently said publicly that the Sundarbans are surely going to suffer due to this power plant but the government will proceed with the project. ‘A lot of ships will be coming, carrying so much coal. So flora and fauna will be substantially affected,’ said Muhith, who is also the founding president of Bangladesh’s most familiar environmental civil society platform,  ‘Bangladesh Poribesh Andolon’.

Given the continuous manifold increase in international, regional and inland shipping through threatened wildlife sanctuaries and reserves, the odds are very high that devastating accidents will happen. Nevertheless, there is no mandatory standard for ship safety features to mitigate the risk of accident. The forest and environmental authorities are seemingly comfortable with rapidly increasing shipping through the Sundarbans.

More than one decade after signing a MoU with the concerned regional forum to develop and adopt a national contingency plan to respond to oil spills and other chemical leakage, there is no known progress till date. Immediately after the Shela oil spill, the ministry of environment and forest said that they revived the efforts for contingency plan under a UNDP supported initiative. However, I do not know of any progress made though the project expired. When contacted, the chief conservator of forests, Md. Yunus Ali, said, ‘This task was given to the environment department. They conducted consultations with stakeholders in their office. I am not updated yet about finalisation of the contingency plan.’

Increased shipping not only multiplies risks from oil spill, the release of coal, chemical, fertilizer and fly ash by accident; in course of routine operation, vessels discharge ballast water, bilge water, and there is cargo tank washing too. There is also the impact of ship-induced waves on the mangrove ecosystem, disturbance to wildlife and the risk of international wildlife trafficking spreading widely with regular vessel based pollution.

The moving and manoeuvring of vessels induce a variety of hydrodynamic changes and physical forces which have an impact on the surrounding flow, alluvial banks and sediments of the rivers. These impacts potentially harm the environment and can ultimately lead to environmental degradation.

The growth of Mongla port also comes with increasing risk of Invasive Aquatic Species for the delicate ecosystem of the Sundarbans. According to resources available with the international ballast water management consortium, GloBallast; the introductions of alien species by ballast water in the hulls of vessels have negative effects on mangrove habitats. For instance, they compete with indigenous species for space and food.

In the absence of minimum environmental management and preparedness, Bangladesh and India are allowing a high volume of shipping, navigation and industrialisation in and around the Sundarbans mangrove region. Even in the British colonial period, when the 21st century’s new obligation of ‘sustainability’ was nowhere to be heard, the authorities were very careful to avoid using the rivers and canals inside the Sundarbans for shipping and navigation. In the era of ‘golden fibre’ jute trade between the Khulna-Barisal regions and Kolkata, the ‘River Conservancy’ was there in the bureaucratic consideration to maintain navigability of waterways outside the Sundarbans.

‘History of the Rivers in the Gangetic Delta, 1750-1918’, a report prepared by a former chief engineer of the colonial irrigation department, C. Addams Williams,  describes some of the  many initiatives to maintain the navigability of the northern waterways of Gorai-Modhumoti river systems. Those rivers still exist, with inadequate water flow however. For safer trade routes, Bangladesh and India can work together to improve the navigability of northern rivers by simply increasing the upstream water flow and establishing an environmental management regime for Mongla port bound ships though through Passur river.

Mohammad Arju is a journalist and marine conservationist.