The flames have reportedly devoured eight of the reserve's 21 ranges, and further spread to Anadapur, Kandachira and Balimal hills in the Podadhia forest range. 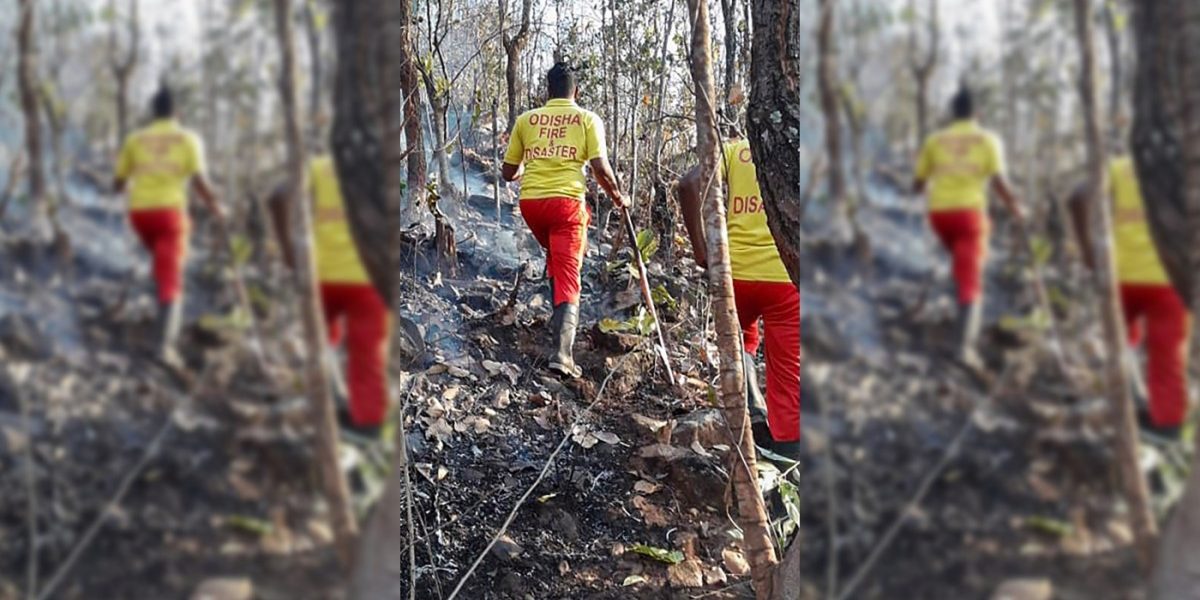 A wildfire raging for over 10 days has destroyed nearly a third of the Similipal biosphere reserve in Odisha’s Mayurbhanj district. The state government has said that firefighters have brought the fire under control but conservationists have also demanded an immediate impact assessment.

The Similipal National Park and Tiger Reserve is spread out over 2,750 sq. km, and is known for its tiger and elephant population. The reserve is also home to a large variety of other flora and fauna, including 94 species of orchids, 55 species of mammals, 304 species of birds, 60 species of reptiles, 21 species of amphibians, 38 species of fish and 164 species of butterflies.

The flames have reportedly devoured eight of the reserve’s 21 ranges, and further spread to Anadapur, Kandachira and Balimal hills in the Podadhia forest range.

“This year there has been an early onset of summer,” Santosh Mohanty, an environmentalist in Baripada who has been working in Simlipal reserve for over 20 years, said. “The prolonged dry spell further spread the fire quickly to other areas.”

Chakradhar Hembram, a former zilla parishad member of Jashipur block, said, “During summer months, a forest fire is occasionally seen in the reserve. But the intensity of the latest one is unprecedented.”

“The effect of wildfire will be drastic for certain wildlife species such as reptiles, amphibians and birds,” said Machua Ho, a teacher at a government high school in Jashipur who has been helping the forest department with outreach activities for 15 years.

According to Ho, the fire is also likely to reduce the number of sprouting mushrooms in the upcoming monsoon season. “Both wildlife and tribal communities depend on a variety of wild mushrooms grown in the reserve,” he added.

The exact cause of the wildlife is yet to be ascertained but speculation is rife. Climate change and illegal mining are the usual suspects. But whatever the cause, some are clear that the quality of local government made it worse.

“Poor administration and a lackadaisical attitude by the forest authorities worsened the situation,” Mohanty Birua, the sarpanch of Astakuanar panchayat in Jashipur, said. “Forest authorities have failed to involve local communities. The majority of Vana Surakhya Samitis [VSS] or forest protection committees remain defunct on the ground.”

Birua is also the convener of Simlipal Vikash Parishad, a local federation that aims to protect forest and wildlife species of the Simlipal reserve. “Earlier, several villages were evacuated from the reserve,” he added. “If there are no villages and people, then who will take care of the forest?” 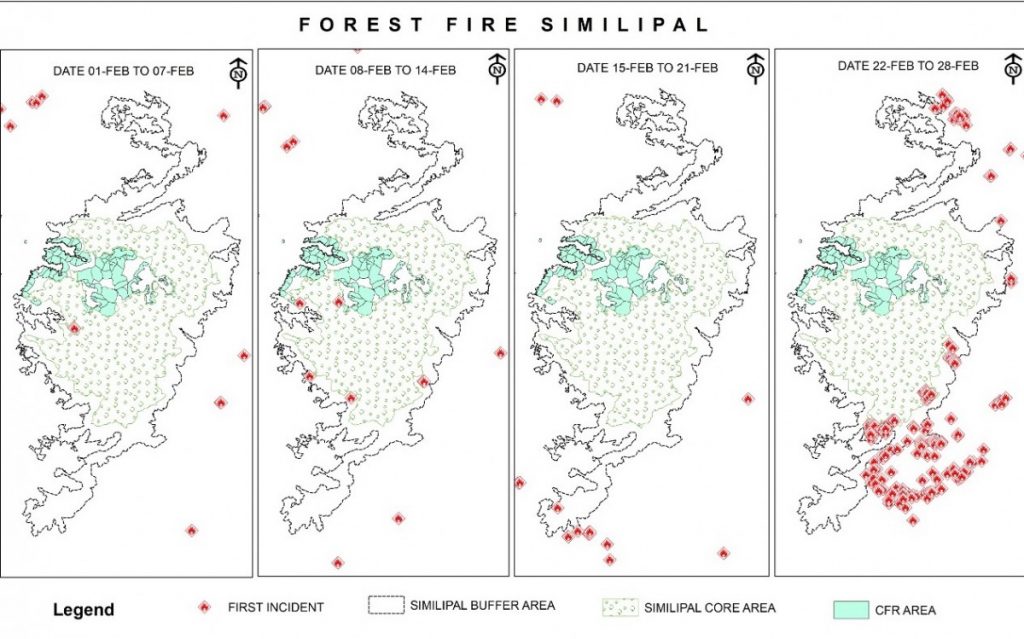 On March 4, 2021, tribal people in Kumbaribil village in Gudgudi panchayat, Jashipur block, collectively controlled an impending wildfire. “There was not a single government [officer] to stop the fire on that day,” Birua said. “Finally, with the support of villagers, we controlled further spreading of the fire. There is a need to build the capacity of members of VSSs, provide an honorarium and recognise their efforts to conserve biodiversity.”

“On the one hand, tribal people are evicted from forests to conserve biodiversity. On the other, outsiders are permitted into the core area in the guise of tourism promotion.”

The sarpanch of Barehipani in Jashipur, Jujhar Bansing, said, “We have seen contractors and labourers from elsewhere being invited into core areas for construction of check dams, roads and to repair fences – and these people at times violate forest laws, discard plastic and other non-degradable waste materials in the reserve.”

“Empowering the community by recognising their forest rights will increase their accountability and responsibility to safeguard flora and fauna in the reserve,” Chauhan added.

The Similipal biosphere reserve is also home to several scheduled tribes, such as the Kolha, Santal, Bhumija, Bhatudi, Gond, Khadia, Lodha, Ho and Makadia. In Mayurbhanj, the tribal population makes up 73.44% of the total, and 5.21% belong to scheduled castes.

Environmentalists have also asked the Government of Odisha to consider the wildfire to be a serious warning vis-à-vis the effects of climate change. “Forest-drought impacts are accelerated in conditions where the forest is highly degraded,” Ranjan Panda, convener of the Water Initiative and Combat Climate Change Network India, tweeted. “It seems an early arrival of summer with mischievous acts by poachers [that] caused the fire in Simlipal forest.”

Y. Giri Rao, the director of a Bhubaneswar-based civil society group working on forest governance and tribal land rights, Vasundhara, said, “There is an urgent need to expedite the pace of mitigation initiatives in collaboration with local communities.”

“Disasters like the Simlipal wildfire destroy forests, which are the most effective carbon sinks.” This has “devastating consequences for endangered flora and fauna” and “for forest-dwelling and indigenous communities on the frontline of climate change.”

“The government should organise awareness campaigns on fire-preparedness with a multi-stakeholder engagement model,” said Sandeep Pattnaik, a Bhubaneswar-based independent researcher. “There is also a need to strengthen satellite-based and centralised information systems that issue early warnings.”

Abhijit Mohanty is a Delhi-based development professional and freelance journalist. He has worked with indigenous communities, refugees, internally displaced people and migrant workers across India and Cameroon.