The environmental and social disruptions that the eight-lane road and the megaport will cause if they materialise will be fatal to the state's water, food and social security.

A '3D' view of Kattupalli as seen from above. Source: Google Maps

Chennai: As a place where a slew of Government of India hashtags converge – #Bharatmala, #Sagarmala, #SmartCity and #MakeInIndia – Ennore should rank among the most unfortunate of places in India. Successive central and state governments have already sacrificed more than 1,000 acres of the Ennore Creek to build port infrastructure, roads, rail lines and power plants. This has devastated the local fishing economy, aggravated flooding and harmed agriculture and water security by causing salinity intrusion. But all that is nothing compared to what is in store for this beleaguered region.

The environmental and social disruptions that the eight-lane road and the megaport will cause if they materialise will be fatal to the state’s water, food and social security. Violent attempts to displace these labour-intensive economies are already evident in Ennore and in the way the eight-lane expressway has been aligned. In this lopsided battle between the farmer and fisher on the one side and the state on the other, the environment will be the collateral damage that will hurt all of Tamil Nadu.

Much has been written about the eight-lane highway. But to fully appreciate its implications, understanding the port proposal and what its “viability” hinges on is vital.

The government-approved coastal zone management plan of 1996 identifies the entire island and the wetlands to its west as ‘no development zones’ because of their ecological sensitivity. But despite this protection, two ports, a coal-fired power plant and a desalination plant have come up on the island.

In 2017, L&T Shipbuilding Ltd. – one of the two ports – bifurcated its Kattupalli operations by demerging its port business into a new venture called MIDPL. L&T retained the shipbuilding and repair facility spread over 361 hectares and MIDPL took with it 136 hectares and the port operations capable of handling 24.65 million tonnes per annum (MTPA).

Currently, MIDPL’s capacity is dwarfed by that of its bigger neighbour Kamarajar Port Ltd (KPL). But with Adani’s entry and its expansion plans, MIDPL expects to ramp up capacity to 359 MTPA – eight-times KPL’s throughput and more than a third of the total capacity of all Indian major ports combined.

MIDPL requires 2,120 hectares (5,239 acres) to realise its plans. Some 440 hectares of new land will be created along the shoreline by dumping sea sand, to deepen the shipping channel. MIDPL’s ‘feasibility report’ (PDF) states that dredged sea sand will also be dumped on 600 hectares to raise the height to five metres above sea level. Most of these low-lying areas are part of the Ennore Creek.

Two new breakwaters with a total length of 9.35 km will jut out into the sea to form the harbour and the shipping berths. A 30 million litre/day (mld) desalination plant will take care of the port’s freshwater needs. This will suck in 75 mld of seawater and discharge 45 mld of toxic hypersaline rejects into the sea.

The cryogenic facilities required to handle liquefied natural gas (LNG) and petroleum gas (LPG) at the port will require seawater-intensive vaporisation stations. At full capacity, MIDPL’s vaporisation works will take in 2,880 mld of seawater and discharge an equal amount of effluent back to sea. That is nearly four times the sewage effluent handled by the Chennai Metro Water Supply and Sewerage Board. The used seawater will contain traces of sodium hypochloride, used as an agent to kill marine organisms in the intake seawater.

MIDPL’s success is premised on rapid and intensive industrialisation of the southern hinterland. A network of expressways radiate from the exit gates of the ports at Kattupally. Missing links with important trunk roads are fast being filled up.

The Rs-12,300-crore Chennai Peripheral Road will connect the MIDPL port gate to the East Coast Road in Mamallapuram. This will require 800 hectares of land, mostly privately owned. Nearly 5,000 trees will be affected. This Japanese-funded road will connect the ports to four national highways, and the proposed Salem-Chennai Expressway at Oragadam, the famous automobile hub. 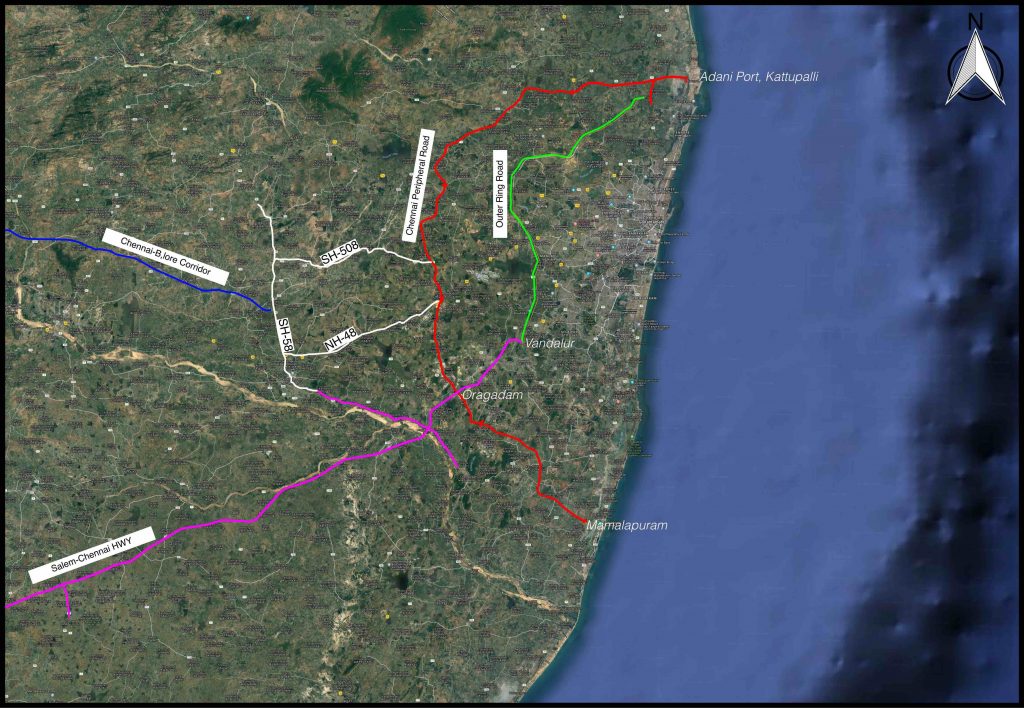 A visualisation of the road network adjacent to the MIDPL. Credit: Google Earth and Coastal Resource Centre, 2018

The almost-complete Outer Ring Road project, at a cost of Rs 2,000 crore, provides an even shorter link between the Kattupally ports and the eight-lane expressway by connecting Minjur to Vandalur, where the expressway ends.

A Japanese-funded Smart City in Ponneri will be the nodal point for the Japanese-funded 240 km, six-lane Chennai-Bengaluru Industrial Corridor. This will be linked to the ports via the peripheral road. What remains of the wetlands is to be developed as industrial real estate for chemical, rubber and plastics industries.

With Ford, Hyundai, Toyota, Nissan, Renault, Daimler AG, BMW AG, Mahindra & Mahindra, Caterpillar and Komatsu all located in and around Oragadam and Sriperumbudur in Kanchipuram, the port hopes to be the exit point for 150,000 automobiles a year, including four-wheelers and heavy vehicles.

If mining leases are given to extract iron ore from Kavuthimalai and Vediappanmalai in Thiruvannamalai district, and Kanjamalai in Salem, the eight-lane way will facilitate its exit as ore or product. The Jindal-owned SISCOL, a maker of special steels, would like that.

In February 2018, the finance and defence ministers separately announced that India’s first defence industrial corridor will come up along the Chennai-Bengaluru Industrial Corridor. Global giants attracted by India’s low labour costs, employer-friendly labour legislation and 100% FDI in defence manufacturing are expected to invest in the region, boosting demand for industrial components that go into manufacturing everything from handguns to aircraft. Multinational defence equipment manufacturers, industrial associations like CII and real estate bodies like CREDAI have welcomed these plans.

The battle lines are clear: farmers, farm workers and fishers on one side, and an incongruous alliance of petty and big industrialists tugging along a desperate, unemployed battalion of footloose labour drawn from the decimated ranks of farm and fishworkers on the other.

Census data reveals that agricultural labour in Tamil Nadu declined from 49.5% of the total workforce to 42.1% in the decade until 2011. This decline does not correspond with an increase in better quality jobs in industry or other new economies. Rather, as a Government of Tamil Nadu publication correctly notes, “This trend is a trigger for rural-to-urban migration and mushrooming growth of urban slums.”

The grand designs to usher in a second industrial revolution by India and China are suicidal even if evaluated only on the basis of their impact on freshwater – a resource that will determine or undermine the future of countries like India.

Each of the above schemes compromise water security by altering contours, depleting aquifers, disrupting hydrological flows, contaminating what remains and aggravating salinity intrusion into groundwater aquifers.

In June 2018, Chennai made the list of a handful of Indian cities whose water will run out by 2020. In lean years, the parched city’s water utility sucks up more than 100 mld freshwater from the Araniyar Kosasthalaiyar Basin. This once-rich resource base is under severe stress today. Over-exploitation for drinking water and profligate consumption, reduced flows in the Kosasthalaiyar river due to upstream abstraction and the steady decline of the Ennore wetlands has reduced groundwater recharge rates and worsened salinity intrusion.

This is bound to get worse. MIDPL, for instance, proposes to flatten the sand dunes in Kattupally island and dump 40 million cubic metres of saline sand from the ocean’s bottom to make new land over the Ennore Creek. That volume of sand, if dumped evenly over Chennai, is sufficient to raise the entire city’s contour by 10 cm. These acts will harm inland freshwater resources.

The roads radiating from the ports have a singular objective: high-speed mobility for vehicles. The right and need of water to flow is an afterthought. The roads either dam the flows or expect the large volumes of monsoon waters used to flowing as sheets over large areas to squeeze themselves through narrow and ill-designed culverts. The result: damage by water-logging on one side of the road, and by desiccation on the other.

The construction material for these projects will also affect remote lands. MIDPL’s proposal needs 12 million cubic metres (423 million cubic feet) of fine sand – that is enough river sand to meet all of Tamil Nadu’s needs for 42 days (with demand estimated to be 10 million cubic feet per day). River sands are water reservoirs.

Sand mining is unsustainable. According to The Guardian, “Sand accounted for 85% of the total weight of mined material in 2014, yet it is replenished by rock erosion only over thousands of years.”

The Ennore coast is eroding fast. In fact, the Kamarajar Port was set up despite warnings that it would trigger erosion. In 2006, a study by the Ministry of Earth Sciences sounded a clear warning: “Now, with the construction of Ennore port, 16 km north of Chennai port, another erosion problem was (sic) emerged and similar issues like Chennai port are on the way. If no intervention is planned, threat to ecologically sensitive Pulicat Lake is inevitable.”

The additional erosion triggered by MIDPL port will breach the narrow strip of sand separating the lake from the Bay of Bengal and facilitate the latter’s march westward.

However, instead of strengthening the enforcement of environmental regulations, the environment ministry at the Centre, almost as if in anticipation of Adani’s project, has been diluting protections. On July 2, 2018, the ministry amended the Coastal Regulation Zone Notification. It is now legal for “strategic” projects like Adani’s Sagarmala scheme to obliterate tidal wetlands.

It has been argued that increased consumption of steel, cement, electricity and building material to execute these projects will increase GDP in the near term. But the resultant topographical changes, environmental degradation, resource depletion and social upheaval will make the long-term unworthy of living.

Note: This article originally stated that used seawater will contain traces of sodium hyposulphite. This is supposed to be sodium hypochloride; the mistake was corrected on July 12, 2018.