The pitch invaders had a specific demand: that the SBI shouldn't provide the Adani group with a loan that they believe the SBI might be considering. 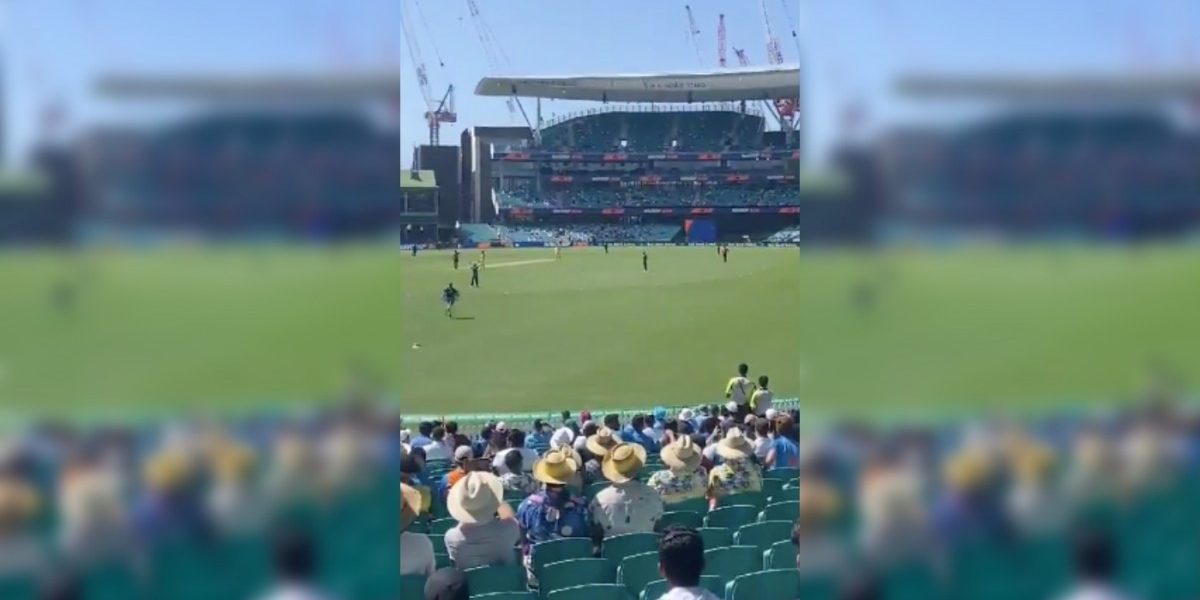 The crowd watches as a protestor runs onto the pitch, November 27, 2020. Photo: Stop Adani Alliance

New Delhi: The first one-day international match between the Indian men’s and Australian men’s cricket teams saw crowds return to international cricket for the first time since March, when governments around the world banned mass gatherings in response to the coronavirus pandemic.

And almost immediately, the crowd made its presence felt.

At the beginning of the seventh over of Australia’s innings, two young men dressed in shorts and black t-shirts walked towards the fence between the Victor Trumper stand and the ground, climbed over and jogged onto the ground. The fronts of their t-shirts read “Stop Adani” and the back, “Stop Coal #StopAdani Take Action”.

A new form of climate action. Pitch invasion in Sydney today protesting against the rumoured @TheOfficialSBI
Loan to the Adani coal mine in Australia. Sbi has so far neither denied nor confirmed if its funding new coal in Australia. pic.twitter.com/HMRCnTFZw7

One of the men ran around the boundary, holding up a white placard. The other ran towards the pitch with a placard of his own, as a rather puzzled David Warner looked on. The men’s posters had the same design: the logo of India’s largest bank, the State Bank of India, and below it the words “No $1BN ADANI LOAN”.

The pitch invaders had a specific demand: that the SBI shouldn’t provide the Adani conglomerate with a loan that they believe the SBI might be considering, and which would enable the Gujarat-based company to finance its financially troubled coal-mine in Australia.

“Millions of Indian taxpayers who are watching the first game of the Indian cricket tour have a right to know that the State Bank of India is considering handing their taxes to a billionaire’s climate wrecking coal mine,” Ben Burdett, identified as one of the protestors, was quoted as saying in a media release sent to journalists by the activist group Galilee Blockade – one of several groups in Australia that have been protesting the proposed development of the Carmichael coal mine.

Over the last few days, people have organised several protest actions around Australia, New Zealand and the US urging the SBI to not provide the Rs 5,000 crore loan that it is mulling for the Adani group, according to IANS. (The report only mentions “media reports” as the source of its information. The Wire has requested more details from IANS and will update this article if/when they become available.)

Tim Buckley, director of energy finance studies, South Asia, at the Institute for Energy Economics and Financial Analysis (IEEFA), argues that if the story was false, the SBI would have denied it, which it so far hasn’t done. Both SBI and the Adani group are yet to respond to The Wire‘s requests for comment.

The loan is vital for the project, which Buckely has called a “climate bomb” and a “stranded asset”.

The project has drawn considerably public opposition since 2016. It has the Australian government’s approval to haul 60 million tonnes of coal a year, which would make it among the biggest coal mines in a world that’s also facing an acute climate crisis. Critics have contended that the mine would emit carbon dioxide in quantities the world can’t afford, and in fact doesn’t need given renewable energy is rapidly becoming cheaper than coal.

The Wangan and Jagalingou people – are the traditional owners of the land on which the mine is to be built – have also stood up against the proposed mine. They have argued that the mine would hamper their ability to “preserve” and “practice” their culture.

The Adani group and protestors in Australia have had a vicious relationship. The Wangan and Jagalingou people have also accused the company of interfering with and subverting the public consultation process to acquire the land. The company also faced allegations of hiring a private investigator to spy on the activist Ben Pennings and his family.

Lately, many protestors have organised under a ‘Stop Adani Alliance’, and have been organising more and more intense protests. ‘Stop Adani’ earrings, t-shirts and placards are a common sight in most Australian cities. It’s possible the company recently rechristened its Australian operations as Bravus Mining and Resources owing to a toxic flavour that’s become synonymous with Adani’s ambitions in the island nation.

Also read: The Adani Juggernaut Is Expanding on All Fronts, Australian Coal Need Not Be One of Them

The opposition efforts have already met with some success, having significantly delayed production. The Adani group had bought the coal tenements in 2010, planned for production to begin in 2014 and predicted peak production of 60 million tonnes of coal per year by 2022.

Production is yet to begin. The mine has missed several self-imposed deadlines. And according to the Adani group’s latest update, it expects production will commence in 2021. The group has also downsized the mine to a sixth of its original size and is now looking to produce 10 million tonnes of coal a year. However, it’s possible the company can expand operations to their intended and original size once the coal dust settles.

On the flip side, even the drastic downsizing hasn’t ameliorated financing woes. Key insurers have dropped out and as many as 49 banks and financial institutions seem to have deemed the project unbankable. This is where SBI is important.

“It would allow Adani to complete the project,” Buckley, who has tracked the project from the beginning, told The Wire. “Adani has been entirely unsuccessful getting any financial institution to finance it. This [loan] would provide the capital Adani Australia needs to build the mine and railway.”

And Buckley thinks it might be an imprudent deal for the bank to make. “The Australian subsidiaries [of the Adani group] are geared beyond their ability to fund the interest, there is zero collateral if the mine fails, and SBI would most likely be unable to find any financial house willing to refinance the loan,” he said.

In a report last year about the Carmichael mine, Buckley and IEEFA concluded that “the project would not open nor survive without billions of dollars in subsidies.” Today Buckley is of the view that the SBI loan, if it works out, could be one form of that subsidy. “Funding a coal mine in Australia that no other bank would touch is not sensible risk management. One would presume this is another example of cronyism.”

International sentiment has also shifted since the Adani group acquired the Carmichael mine ten years ago. Citizens have less demonstrated lesser appetite every year for new coal projects. So international financial institutions are also shying away from funding new coal. “Global capital is fleeing coal and coal power,” as Buckley said.

SBI recently raised $100 million through green bonds just to promote renewable energy projects. The French asset management company Amundi, one of the major investors in these bonds, has threatened to disinvest “immediately” if SBI were to finance the Carmichael coal mine.

“We consider SBI should not finance this project. It’s their decision, ultimately, but we’ve been extremely clear on the fact that if they decide to do it, we would immediately disinvest,” Jean Jacques Barberis, director of Amundi’s institutional and corporate clients division told Reuters.

The German state-owned development bank KfW, which has partnered with SBI to fund renewable-energy projects, has also tried to distance itself from the prospective loan. “KfW Development Bank cooperates with SBI exclusively with regard to the promotion of renewable energies and energy-efficient housing within India. The Carmichael mine project mentioned is not part of this cooperation,” it said in a press release.

Both SBI and the Adani group are yet to comment on media reports and the protests against the prospective loan.