To solve water problems in a cold desert, Wangchuk came up with a path-breaking idea: freeze millions of litres of water in the form of 'ice stupas'. 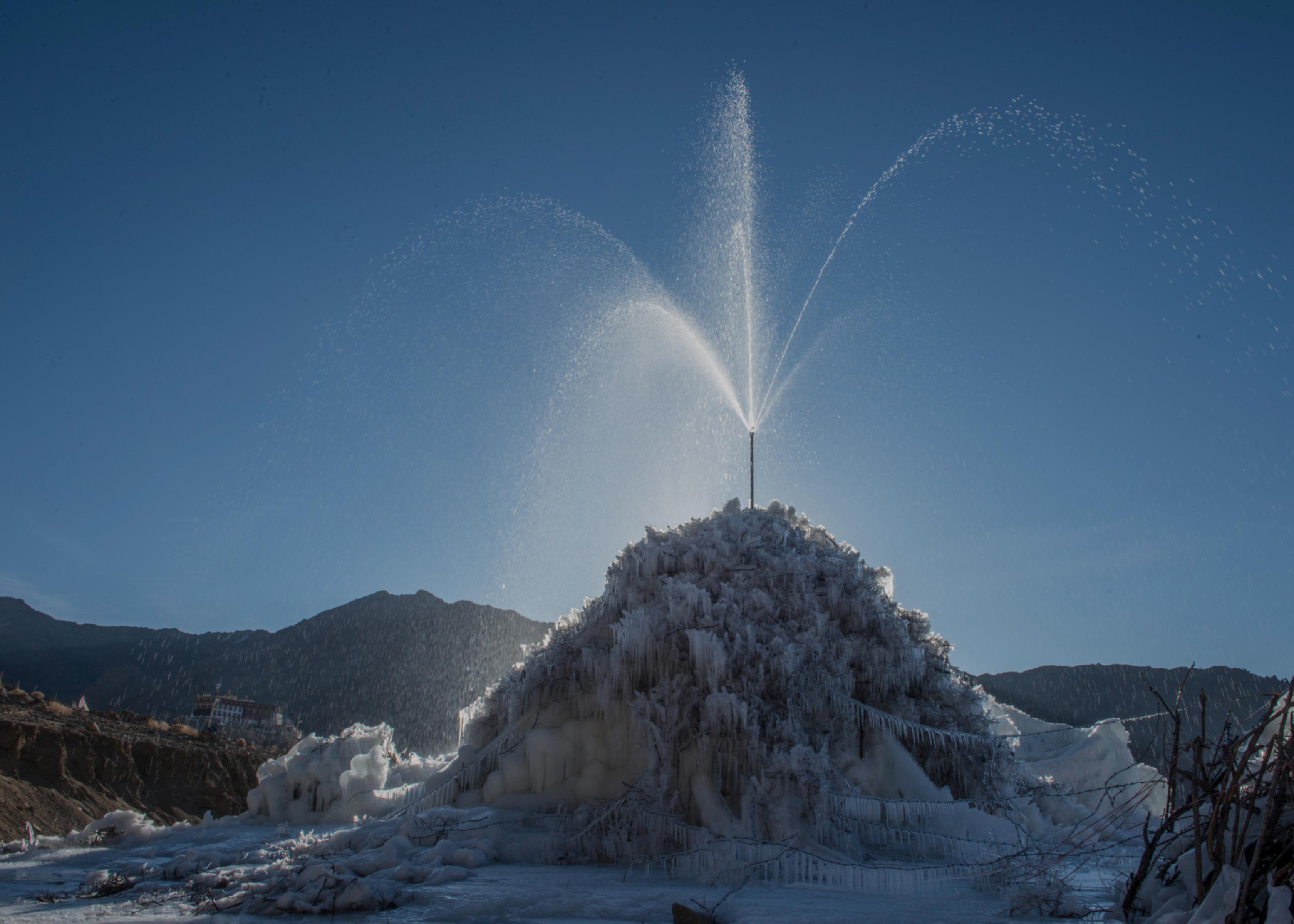 Sonam Wangchuk became only the second Indian to win a Rolex Award for Enterprise on November 15, 2016. He received 100,000 Swiss francs (Rs 67 lakh) and one of the world’s most expensive watches engraved with his name from actress Michelle Monaghan. The gala event at the Dolby Theatre in Los Angeles had Hollywood celebrities like James Cameron and Don Cheadle and conservation star Sylvia Earle in attendance.

Every other year, Rolex supports individuals with innovative ideas that make the world a better place. To solve water problems in a cold desert, Wangchuk came up with a path-breaking idea: freeze millions of litres of water in the form of ‘ice stupas’.

Through the winter, glacial melt water rushes through canals, streams, and rivers. When the ground is frozen solid and air temperatures not much warmer, it’s not a time for growing crops. Come spring, mountain people need all the water they can get to sow. Everyone becomes a voracious consumer of water, and streams dry up. The tranquility of these remote villages is broken when families fight.

Three years ago, mechanical engineer Sonam Wangchuk drove over a bridge and noticed ice in the shade of a bridge. At that moment he had been pondering a problem posed by another innovative engineer.

Chewang Norphel, an older engineer and a friend, had pioneered a method of freezing fields of water high up in the mountains. He dammed north-facing valleys and diverted streams to trickle slowly into them. When one layer of water froze, he allowed more water to flow in and freeze until a two-metre-thick block of ice formed. In the warm spring temperature, the ice melted and flowed down through channels to the fields. He faced one problem: the pond of ice melted too quickly and villagers ran out of water before summer.

Many of the artificial glaciers he had created had fallen into disrepair. Villagers had to trek high up into the mountains in single-digit winter temperatures to freeze water. Could Wangchuk improve the idea or solve the problem of water shortage? Wangchuk runs an alternative school in Phey, 13 kilometres from Leh, for about 60 students a year who fail the school board exams. The Students’ Educational and Cultural Movement of Ladakh (SECMOL) alternative school coaches the 16-year-old students and also enables them to learn by applying their minds. In the past, the school’s students designed solar-powered mud houses uniquely adapted to the region’s climatic conditions. One enterprising student invented an automatic door closer using a sand-filled plastic Coke bottle and a pulley.

When Wangchuk noticed the ice under a bridge near the school, he had a eureka moment. The ice hadn’t melted even at the lowest elevation in Ladakh in hot May. It wasn’t ambient temperature or low elevation that caused ice to melt. It was direct sunlight. If ice could be shaded from the sun, it could last longer. Providing shade to a vast frozen pond located high above the villages wasn’t practical. If it presented a smaller surface area to the sun, then it could be made to last longer.

The answer to the problem of ice melting too fast was to freeze water in the shape of a cone that presents minimum surface area to the sun and holds the maximum volume of water.

In winter 2013, Wangchuk and his students froze 150,000 litres of water in a six-feet-high prototype in Leh under the full glare of the sun. They piped water from upstream using gravity, not electricity or machinery, to a spot that was a little more than 3,000 metres in elevation. The water erupted in a fine mist that turned to ice before it hit the ground. Numerous frozen water droplets accumulated until the pyramid resembled the wax drippings of a lit candle. When it lasted until May, Wangchuk felt gigantic ice cones can be frozen anywhere in the desert of Ladakh. Since it resembled a Buddhist stupa, he came up with a catchy label: ice stupa.

With donations totalling Rs 75 lakh, the team built a larger ice stupa in the winter of 2014 that released two million litres of water well into June. The biggest expense was the pipe that directs water from the stream to the stupa site. But once invested, stupas can be built year after year with little monetary cost. “The capital cost of infrastructure per litre is Rs 0.025,” said Wangchuk in 2015 to Scroll.in. “Water is free ever after.” A full-sized 30-metre-high ice stupa could hold 15 million litres of water that could irrigate a 50-hectare area.

However, every village hankering for water would need to raise lakhs of rupees. Even though the per unit price of water was cheap, crowdfunding to meet the infrastructure needs for each village would be impractical. He had to find other ways of financing.

The interior of the stupa is shaped like an igloo. This cave, insulated from the ice by plastic, is the command centre from where the team controls the height of the pipe and the flow of water. Once the cone is created, it could be rented to tourists, providing a strong boost to the local economy.

The 111-year-old Rolex watch company is entirely owned by a non-profit private trust. Every year, it channels an unknown percentage of its profits to philanthropic causes. To celebrate the 50th anniversary of Oyster, the world’s first waterproof watch, the company set up the Rolex Awards for Enterprise in 1976. This is the 40th anniversary of the awards.

“The awards are not for past work,” said Rebecca Irvin, Head of Philanthropy, Rolex. “They are for ongoing work so the laureates can use the award as a catalytic force to further their projects.”

Although Wangchuk can install the necessary plumbing infrastructure in numerous villages with his prize money, that’s not what he plans to do. “This is seed money,” he said. “You don’t eat seeds; you use them to grow. I’m pledging this money as a  corpus for building a university to attract more funds. The university will have a multiplier effect to create many more ice stupa-like solutions to problems that mountain people face. It’ll offer courses in farming, tourism, business, suited to mountains.”

Wangchuk hopes the university will have affiliation with International Centre for Integrated Mountain Development (ICIMOD). “Students will be taught to use the 3 Hs – their heads, hands, and hearts,” he said.

In collaboration with the Autonomous Hill Council of Leh, and the Drikung Kagyu Cultural Welfare Society, the Himalayan Institute of Alternatives will be established on 500 hectares of desert greened with ice stupas. Wangchuk estimates the university will be open to students by the year 2017.

Rolex received 2,322 application from 144 countries. Of the 38 finalists, the jury chose five winners and five associate laureates this year alone. So far the company has donated nearly $8 million to 140 awardees around the world.

“I wanted to auction my watch and contribute the funds to the university,” said Wangchuk with a chuckle, while Irvin shook her head. “But Rebecca felt it would be a bad idea.”

“The watch is a personal reward for the winners,” said Irvin. “They deserve it.” True to his word, Wangchuk declared his intention to raise additional funds the day he received the award.