Two environmentalists take a walk along a river and find that they should have brought along the policymakers, planners, engineers and politicians claiming to help it. When heading out on an adventure, it is standard practice to look at satellite imagery of the area to chart an informed plan of action. However, when we were preparing for our walk along the Ken river, we couldn’t access a reliable map of the watercourse all the way from source to mouth. 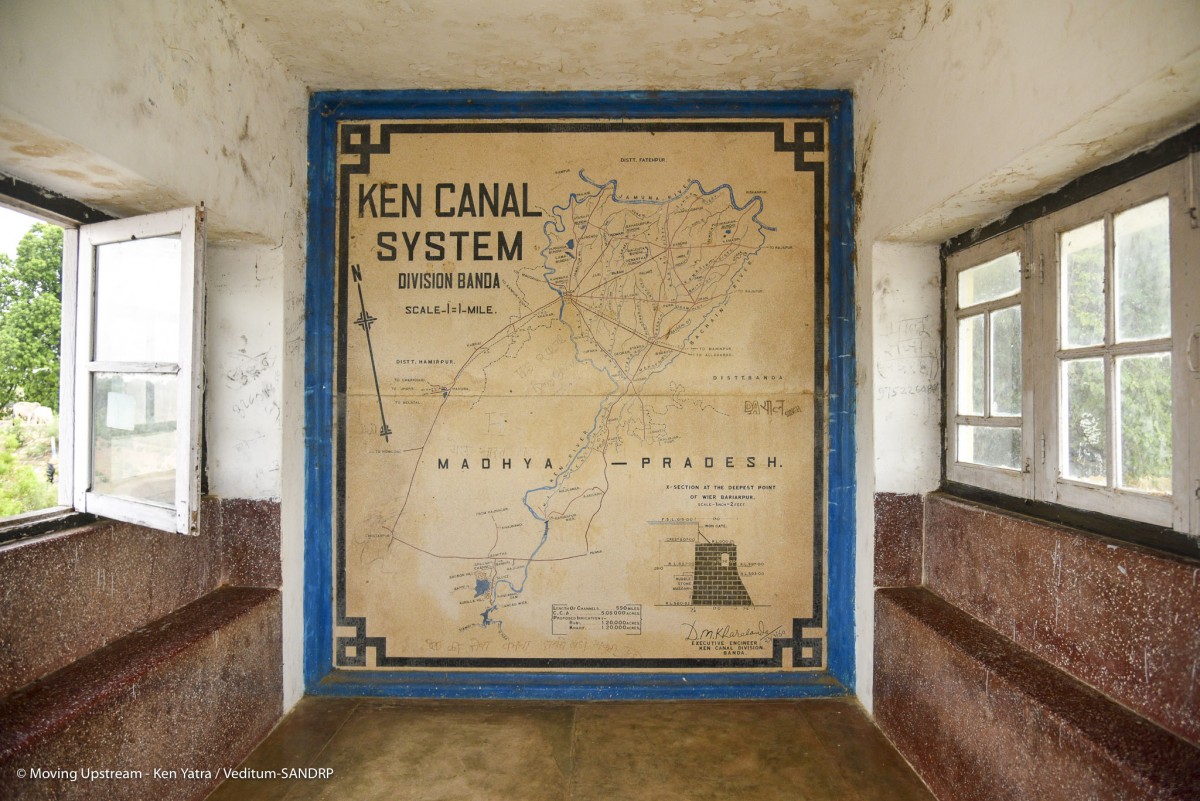 Map of the Ken canal system at the Bariyarpur barrage. Credit: Veditum-SANDRP

We tried tracing the river on a map using satellite data for cues, moving upstream from an established point of identity: Chilla ghat, the confluence of the Ken with the Yamuna in Uttar Pradesh. However, this exercise proved difficult and led us astray multiple times, especially in the upper catchment area. It was only later, when walking along the river, did we realise that this was because almost all of Ken’s tributaries have a larger discharge than the Ken itself. Our virtual search for the Ken’s source kept taking us to the source of its tributaries in nearby hills. Thanks to the walk, we now have an actual and detailed map of the river that we intend to share soon.

Everyday conversations often miss out on the important role of tributaries and groundwater as vital components of a river’s health. For example, when ministers make claims like “We won’t allow any new dams to be built on the Ganga”, displaying a commitment to poll promises, citizens take it at face value. This particular comment had reappeared recently when the Government of India was trying to expedite the construction of multiple small and large dams in the Ganga basin, including the proposed Daudhan dam on the Ken, a part of the Ken-Betwa river interlinking project. 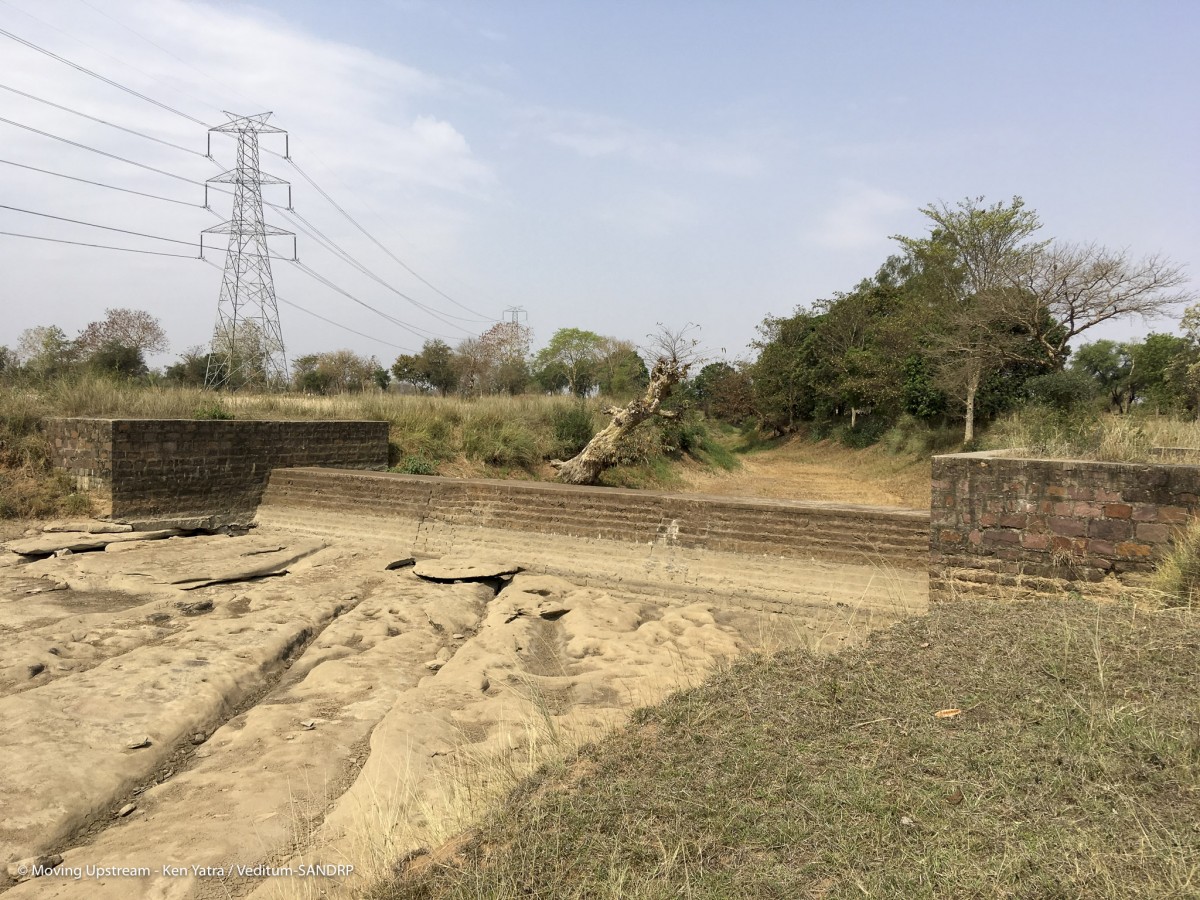 The Ken’s plight in upstream stretches, about 50 km from the source. April 2018. Credit: Veditum-SANDRP

Our walk in the upper regions of the river were largely through dried stretches, where we would regularly come across bridges and check dams with no water to be found. We also noticed the sudden appearance of pools of water in the same dry channel, sometimes so large as to be confusing. Although we couldn’t understand how the pools had come to be, the locals were familiar with them as well as had names.

These pools are called dabra, dabri or dabran, depending on their size and number. We were told that these pools were filled by underground springs, a phenomenon we had only read about until then. This was river science in action, the relationship between groundwater and rivers playing out in front of our eyes. Captured surface water that had filtered through layers of earth over time was now feeding the river, sustaining life when people were thinking about the imminent summer.

In some places, these springs were venerated, protected to the extent that their water could be used only if it overflowed. In other places, the pools had tens of pipes jutting out like tentacles, sucking out all that the ground could provide. Changing cropping patterns (from millets to relatively water-intensive crops like wheat and paddy) and the demand for higher acreage under cultivation (i.e. cutting down of old forests and occupying scrub lands) makes this an alarming situation because it will further stress aquifers that seem to have already reached their breaking point. 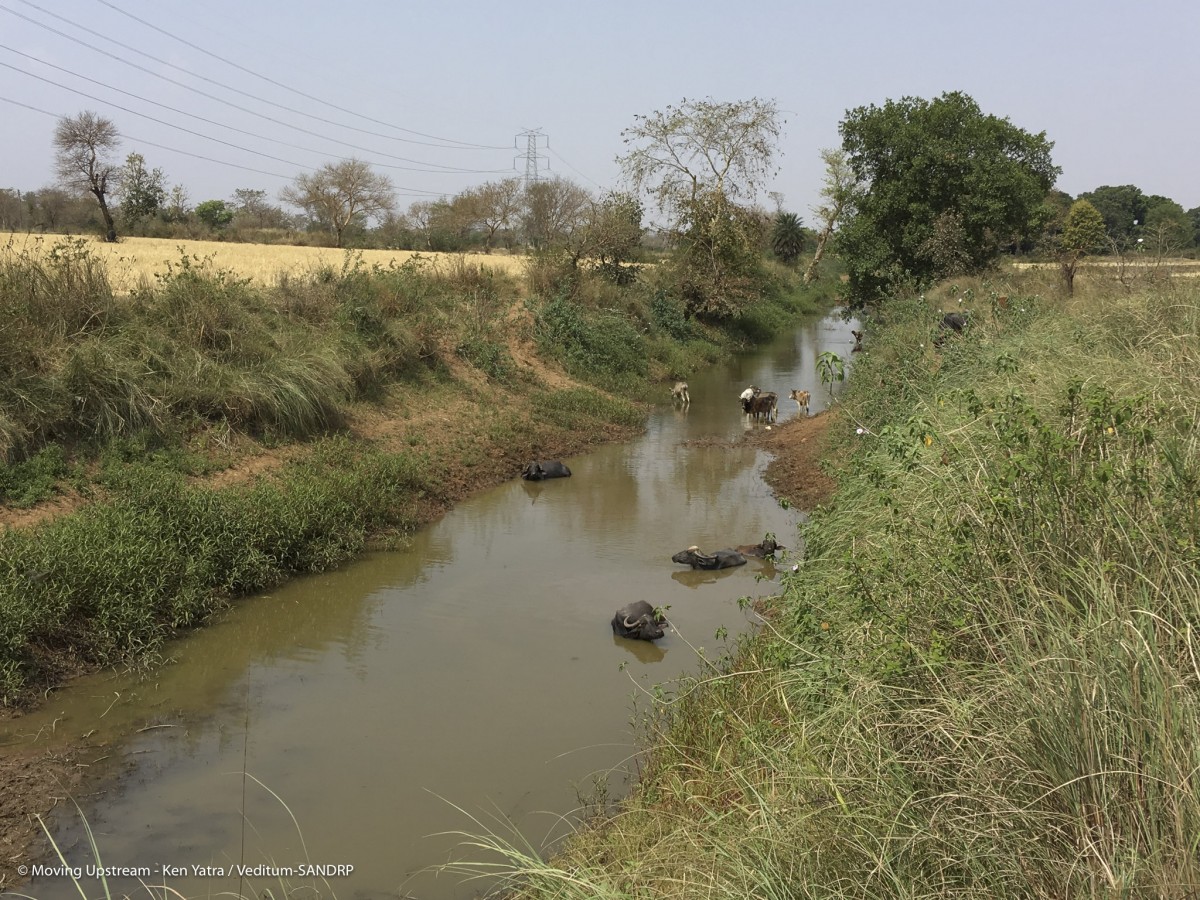 Cattle cooling off in one of the pools. Cattle-rearing is a common source of livelihood in Bundelkhand, and will be severely affected if water sources dry up any further. April 2018. Credit: Veditum-SANDRP

The primary objective of our walk along the Ken was to document and learn more about the basin, and so create a good baseline of information and stories for future studies. Our time – when not making observations along riverbanks – was spent in villages, immersed in discussions about the people and the river. We discussed old stories, traditions surrounding the water, agricultural practices, recent climate patterns, historical narratives and the people’s aspirations.

Afternoon lunch breaks would sometimes mean a gathering of villagers, mostly male, sharing their stories. We did not choose these groups for discussions. Every afternoon was a random assembly of folks in a different village, people who were somehow present at the same location during our time of visit. When Ram Khilawan of Pailani mentioned “disastrous floods” on the second day of our walk, we were surprised. Over a 100 years of living memory in villages along the Ken named 1978, 1992 and 2005 as the major flood years, and how floods in recent years have often left them stranded on higher ground. Outside of the monsoon season, the blame, according to the locals, lies with construction activities on the river – whether the bridge over the Yamuna 18 km downstream of Pailani in Uttar Pradesh or a new check dam at Mahod in Madhya Pradesh.

In fact, at almost every major structure on the river that we came upon, villagers had a similar flood story. Villages that had never seen big floods were now experiencing them every monsoon because of these structures. They said those who built these structures didn’t understand the local landscape, the river’s geomorphology and created and used design that didn’t make room for the river. As a result, back-flow from the river’s obstructed path entered areas historically safe from floods. The water also refuses to drain just as easily as it used to. The Ken meets its first bridge just 500 m downstream and its first check dam, 200 m downstream, of its origin.

However, the same people who had had multiple points of view about protecting the river didn’t know nearly enough about the proposed Ken-Betwa river-linking project, which if approved would have a drastic effect on riparian communities. A few of those gathered would actively respond to our questions but most others remained quiet, only wanting to know more. The few in the know had formed a group called Sayane, or ‘smart ones’, who kept themselves abreast of developments through newspapers and visits to nearby villages. But even this group was way off the mark when it came to the finer details.

We were aghast to find that most of our interlocutor friends did not know that such a project of such a scale had been proposed (and was being aggressively pushed in political corridors). In many areas, we were the heralds of this information whereas this is one of the principal responsibilities of the state. 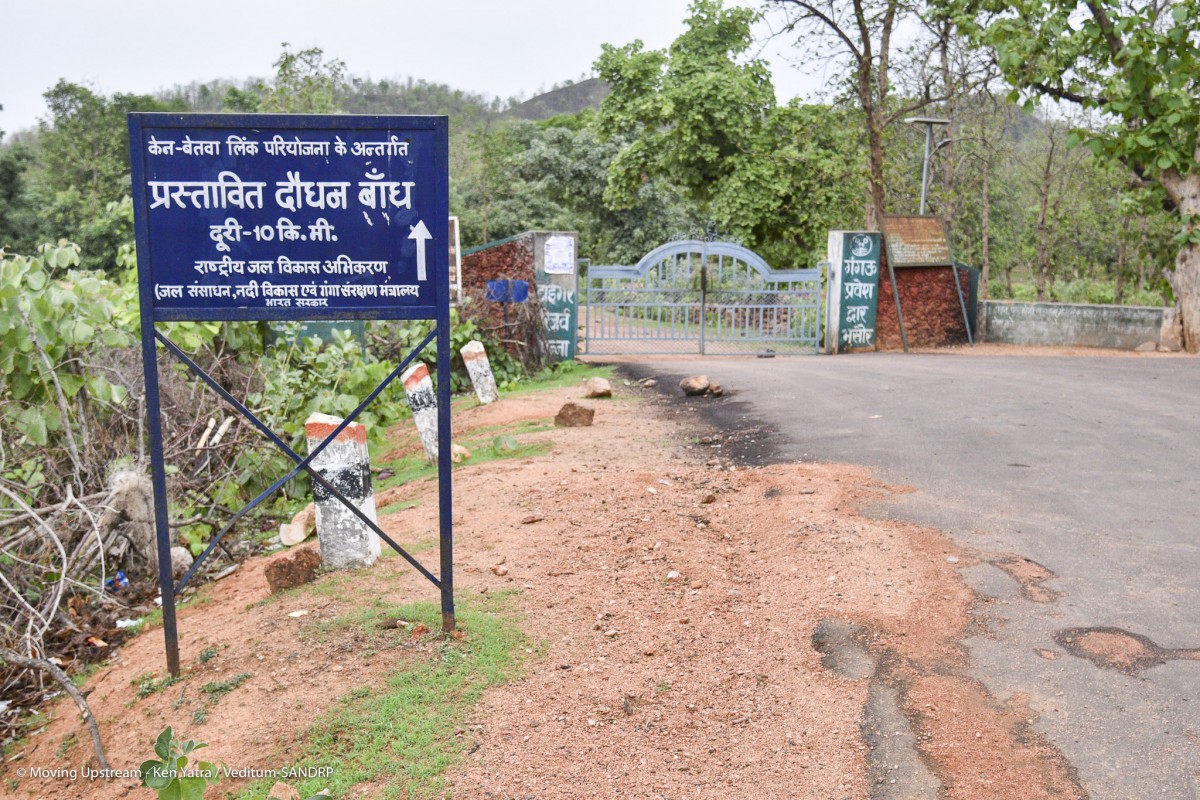 A board at the Bhusour gate of the Panna Tiger Reserve announcing the Ken-Betwa river interlinking project. Credit: Veditum-SANDRP

The first thing most people want know about the project is about how, or it if at all, they will be protected from floods. Because the Ken already has a dam at Ganghau and a barrage at Bariyarpur, apart from other smaller structures strewn throughout, the people would begin to doubt if this would make things better by the end of the conversation. Some farmers noted that if the regular river-plain floods were disrupted, the soil in their land would stop receiving the natural, cyclic boost to fertility. This is important for their communities because it awards them with a bumper crop without heavy investments in fertilisers and additives.

Some assumed that the promised irrigated land from the project would be created in their village (since many newspaper reports only mentioned that ‘Bundelkhand’ would receive X acres of irrigated land whereas Bundelkhand comprises 13 districts between two states). Others assumed the flow of water would be in both directions – from the Ken to the Betwa and vice versa – according to the availability of ‘excess’ water. Even others thought that the water was going to flow from the Betwa to the Ken, given their understanding of the volume of water in these rivers. None of this was true, however.

We sometimes invited villagers to speculate on the possible local outcomes if the interlink was actually realised. In a sea of concerns, drinking water and cattle-rearing raised their heads often. In the dry months, life depends crucially on the minimal amount of water in the river – the result of the abuse of groundwater and consequent damage to forests in the catchment area. Many worry about how much longer we can continue hurting the river before their lives are wrecked. News headlines of droughts in Bundelkhand serve a constant, searing reminder of what could be in store, but who must pay heed more and who actually does?

The walk opened new windows into the realities of those living close to the river. With the knowledge as well as communication gaps being as big as they are, the state’s decision to proceed with large projects seems rash. Active local participation in future studies will be key to striking the necessarily fine balance in an increasingly stressed ecosystem. We hope that our journey and documentation, once compiled and shared, will encourage more people to take up research work in this geography.

Bhim Singh Rawat is affiliated with SANDRP and Siddharth Agarwal, with the Veditum India Foundation.