Residents of Manibeli who have decided to boycott the elections due to apathy of the politicians. Photo: Kanchan Srivastava/Mongabay

At a time when election fervour is at its peak in Maharashtra and political parties are sweating it out to lure voters with tall promises, residents of the Manibeli village in northern Maharashtra’s Nandurbar district have decided not to cast their vote. It is the first village listed on Maharashtra’s electoral rolls and has just 135 voters.

The simple reason is that the village lacks electricity and road connectivity even after 72 years of independence, despite tall claims of 100% electrification. The villagers have given up as they say that they no longer have any willpower left to fight for their basic rights.

“We will boycott the election process because our years of struggle to get electricity and a road didn’t succeed. An eight km-road approved under the Pradhan Mantri Gramin Sadak Yojna two years ago is stuck in red-tape. We have lost all hopes from the politicians now,” Natwar Bhai Tadvi (60), a villager who had moist eyes, told Mongabay-India. 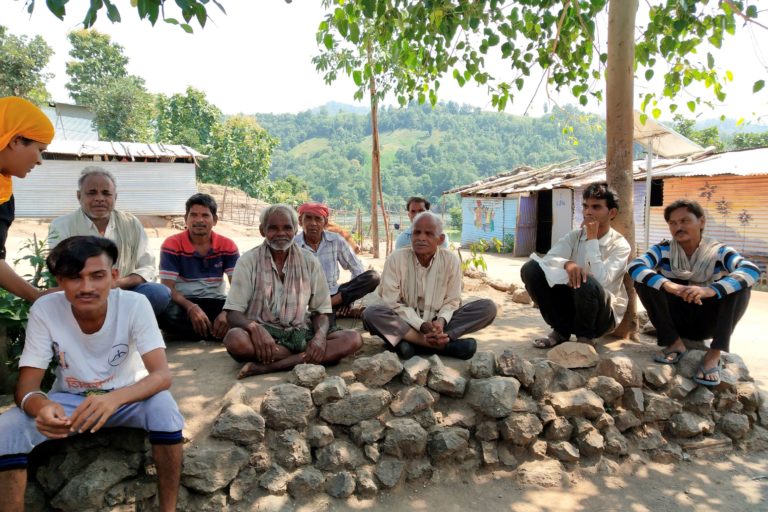 Mongabay-India visited Manibeli on October 12 with less than 10 days to go for the Maharashtra legislative assembly elections on October 21. The village is tucked away in the remotest corner of the forest-clad and tribal-dominated Nandurbar district, which lies in the Satpuda range and is surrounded by the backwaters of the Narmada river. It comes under the Akkalkuwa tehsil, which is the assembly constituency number-1 of Maharashtra.

The Nandurbar district has two distinct physiographic features. One being the hilly terrain of Satpuda range which is predominantly dominated by the tribal community while the other one is the Tapi river basin, which is comparatively more fertile and has good irrigation facilities. Of the total 1.6 million population of the district, about 70% (1.14 million) belong to the tribal community.

“The irony is that our dark village faces the colossal Statue of Unity and Sardar Sarovar Dam (both in Gujarat) which are lit magnificently in the night. Yet, the politicians do nothing for us,” said Narayan Tadvi, the former Sarpanch of Manibeli village while justifying their stand to refrain from voting in the assembly elections.

Another resident, Manilal Tadvi revealed that whenever their “gram panchayat pushes for a power connection or government-run schemes, the proposals are turned down, citing the ‘area under submergence’ status.

The darkness prevails even as the Maharashtra state claims to have achieved 100% village electrification many years ago. By December 2018, the state was listed among the 25 states with 100% household electrification.

Also read: Dammed and Mined, Narmada River Can No Longer Support Her People

This is the first-ever poll boycott by Manibeli village, which was the centre of struggle during the ‘Save Narmada Movement’ in the 1990s. It was the first village submerged under the Sardar Sarovar Dam project in 1994. While some villagers were displaced to nearby places in the same taluka, some were rehabilitated in Gujarat, and a few continued to stay in the village, building their houses upwards on the deserted hills as their rehabilitation claims remained pending.

Being closest to the dam, the hilly forest village goes under further submersion every time the dam’s height is increased, forcing the villagers to construct the houses further uphill at their own expense. 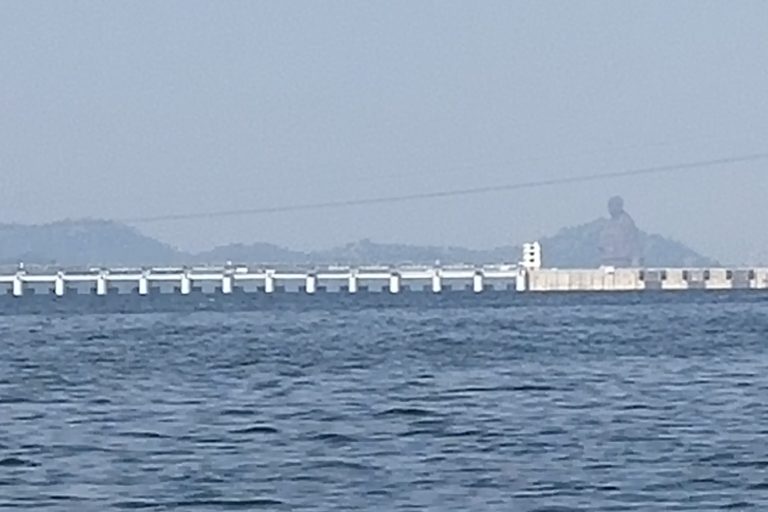 The apathy of the political class is driving the voters away

The pain of being ignored by the political class is also written large on the faces of the residents of the village. The people of the Manibeli claim that voters in their village have never seen their legislator (KC Padvi of the Indian National Congress) or parliamentarian (Heena Gavit of the ruling Bharatiya Janata Party) or any politician. However, most of them admitted to having voted in the past as they said that the election commission of India does install a polling booth here despite all odds.

Over 19 families in the village, including Tadvi’s, lost their houses and all household items to the Narmada river on September 17 this year, when the Sardar Sarovar dam reservoir was filled to the full capacity of 138.68 metres. After that, the affected people were put up in the makeshift houses of tin provided by the district administration. After losing their ready-to-harvest crops of maize and jowar (sorghum), they are now surviving on grains and clothes donated by fellow villagers.

“No political party has come to see our plight so far,” rued 30-year-old Dilawar Singh (30), a resident of Manibeli village. 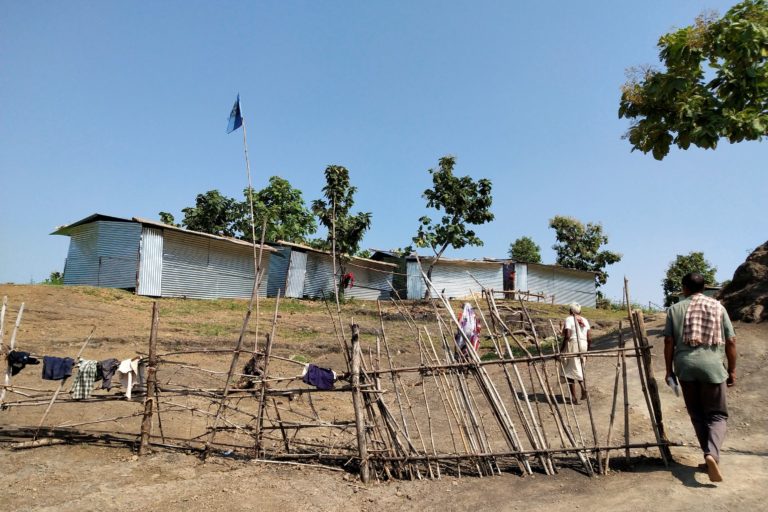 Manibeli is virtually cut off from the rest of Maharashtra

Manibeli is unlike your regular destination in Maharashtra where travel may be an easy task. A two-hour boat ride in the backwaters of the Narmada river is the only way to reach the village. With no public transport, telephone or mobile connectivity, the village is virtually cut-off from the rest of Maharashtra, which is counted amongst the most developed states of India.

For any administrative work, the residents make an arduous, two-day trek to Akkalkuwa, the taluk headquarters. Some families own boats which help them to travel to Molgi from where Akkalkuwa is 60 kilometres.

The village has a government school on paper, but most children study in the residential school run by the Narmada Bachao Andolan (NBA) which runs classes 1-4.

Also read: The Dance of the Displaced: What Progress Looks Like in the Narmada Valley

The efforts to resettle the people of Manibeli began in 1985. About 100-odd families were shifted to Parveta in Vadodara district of Gujarat. The land offered to them as compensation was in an abysmal state and the monetary compensation was less than half of what was promised. Subsequently, the NBA led by activist Medha Patkar pursued their cause.

“The village remained at the centre of the Narmada struggle for long. The government’s effort to deforest the submergence zone was also resisted very strongly during that time,” said senior environment journalist Shailendra Yashwant, who reported the happenings from the ground. 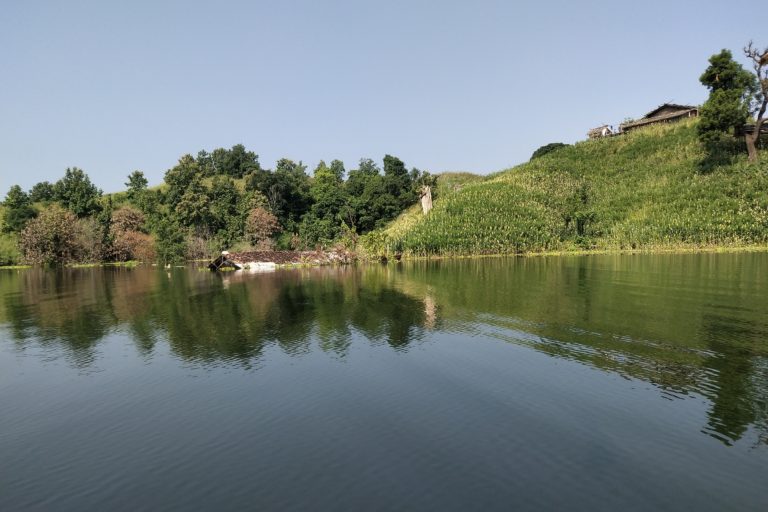 The village shot to fame in Mid-1991 when NBA activists sat on a protest in the hut at the lowest level amid rising water. The three-month-long protest was termed Manibeli satyagraha. The police arrested 63 protesters, the NBA was banned in 33 villages and eviction notices were served to the people of Manibeli.

To oppose the eviction, over 28 families including that of Narayan Tadvi, returned the land allotment documents of the resettlement site to the authorities in December 1991 saying that the land was useless for cultivation.

Nevertheless, the villagers were forcefully evicted in mid-1992 as the water in the dam was rising. Some of them returned and organised a second satyagraha again in 1992. The present protest is a continuation of this long history of Manibeli’s resistance.

This article was originally published in Mongabay on October 16, 2019.