Concern Over Air Pollution in Varanasi Brings Political Parties Together

At an event organised by an environmental NGO, representatives from various parties pledged to include environmental goals in their assembly election manifestos. 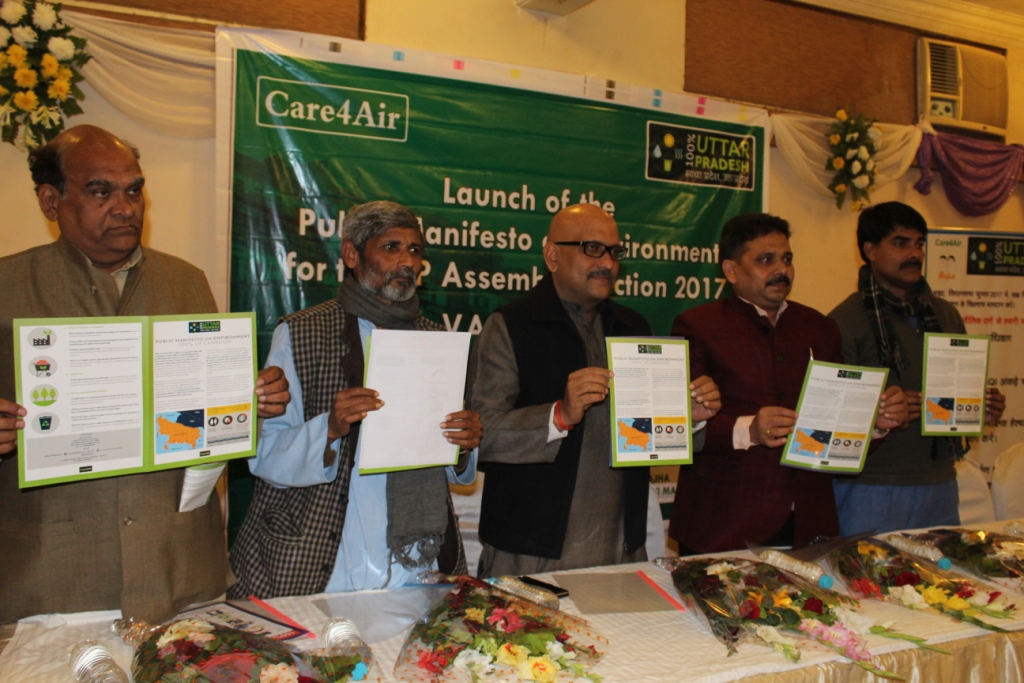 Varanasi, Uttar Pradesh: Ever since Varanasi became Prime Minister Narendra Modi’s constituency, it has been claiming more space in the national media besides being frequented by various union ministers on an almost weekly basis. However, certain critical issues of the temple city have remained unresolved; for instance, the alarmingly rising level of pollution in its air.

According to the November 2016 World Health Organisation data, PM2.5 levels have been at more than 20 times the WHO’s limit in Varanasi. According to a post-Diwali study conducted by the Whistleblower Trust, a citizens’ organisation that runs a state-wide campaign called Care4Air, air quality data collected from 13 major locations of the city on October 31 showed that “PM 2.5 particles rose much above even the alarming levels, and in certain parts of the city like Sonarpura, Machhodari, Lanka, Godauliya and Sarnath, the levels were 15 to 20 times above the norms set by the government of India.”

In a press meet, members of the trust said, “The Centre has set a standard of 60 micrograms per cubic metre (mpcm), but in the Sonarpura area the PM 2.5 reached as high as 999 mpcm.” Central Pollution Control Board data, released in 2015, ranked the air of Varanasi as one of the most toxic in the country.

Keeping the alarming data in mind, prominent members of various political parties came together at an event organised by the trust along with other concerned citizens in Varanasi on December 9. The event saw the launch of an environment manifesto, the first by a civil society initiative in Uttar Pradesh.

According to the organisers, the document will soon be presented to the head of all political parties to include some of the suggestions in their manifestos for the coming state assembly elections.

Speaking on the occasion, Ekta Sekhar, a local environmental activist associated with the Care4Air campaign, said, “The pollution level in the city has already crossed the danger mark. Earlier, our focus was limited to water pollution in the Ganges but the scenario has turned more unsafe. Because we can see dirt in the Ganga water, we can demand its cleaning but we can’t do that of the air; the dirt in the air is invisible and is therefore not in immediate public sight. It makes addressing issues of air pollution more difficult.”

She said, “We suggest that people of Varanasi regularly wear masks to protect themselves from heaps of dust and smoke on the streets.”

Sharing some of the aims behind the manifesto, Sekhar told those present, “We are planning to start an awareness campaign in Varanasi soon against air pollution caused by fuel, we will try and encourage people to use public transport. We will also push for an alternative to the common fuels used in the city, like petrol and diesel.”

Some of the key suggestions in the manifesto include putting in place a mechanism to provide regular air quality data and health advisories to the public, working towards shifting to 100% renewable energy which includes releasing clear guidelines to generate 13,000 megawatts of solar energy by 2022, developing an efficient public transportation system and phasing out diesel buses and rickshaws with those based on electric technologies besides enforcing strict emission standards across all vehicles, factories and industries.

It also called for establishing solid and liquid waste management systems in all towns of Uttar Pradesh and bans on releasing untreated sewage into the river system and on dumping waste of any kind into water bodies.

“We also need a regional clean air action plan that is implemented in collaboration with the other states from the Indo-Gangetic plain,” said Sekhar.

Later, speaking to The Wire, Ghanshyam, regional officer of the state pollution control board, said, “Pollution level in Varanasi is still three times more than the danger mark set by the central government. During Diwali, it went up to 10.0, five times high than the danger mark. As per the latest data, the PM10 has reached 167 Air Quality Index (AQI).”

He said, “In such a situation, everyone in Varanasi may begin to experience health problems, particularly children and senior citizens.”