Two islands in the Gulf of Mannar islands have drowned. The state government and two institutes now have a plan to keep 19 others from facing a similar fate. 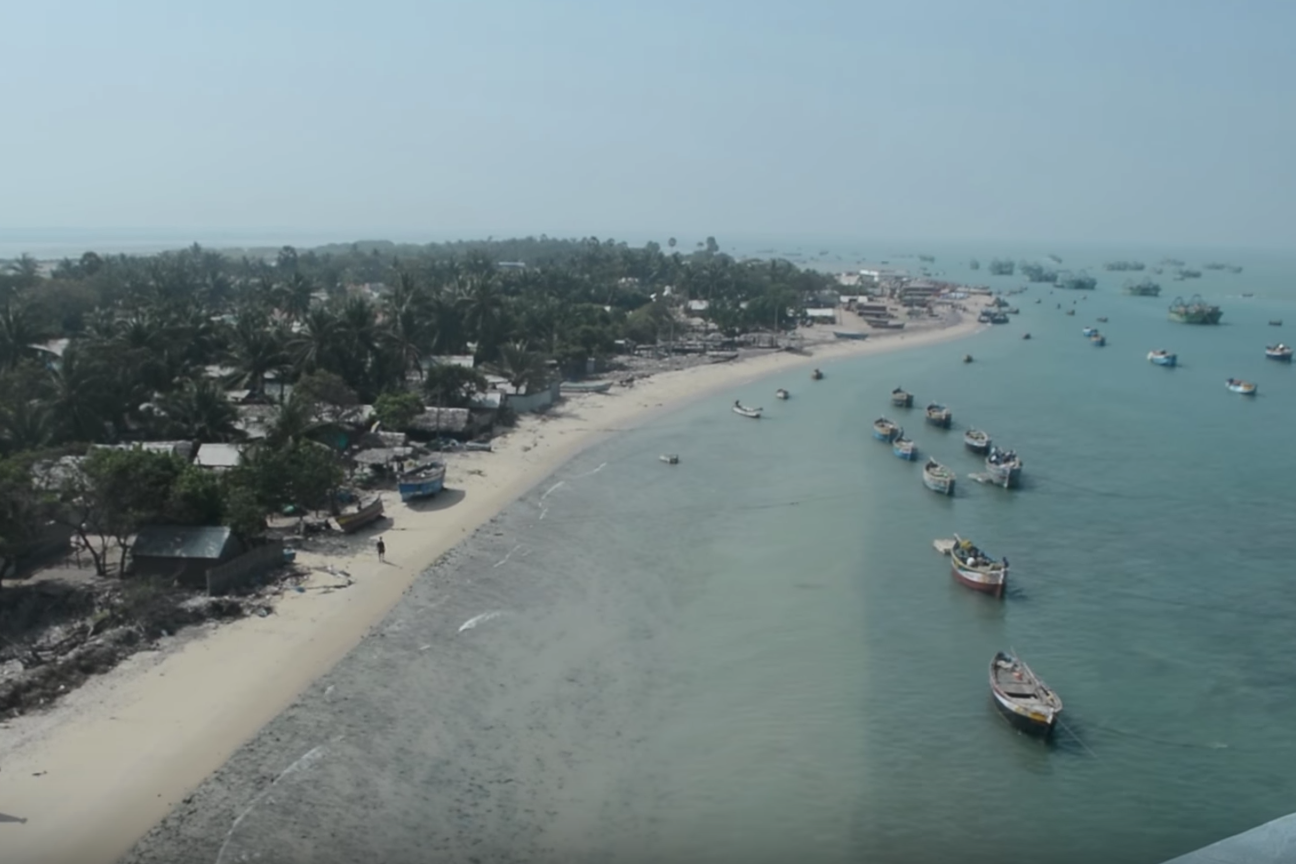 Thoothukudi: Until a year before the 2004 tsunami ravaged India’s southeast coast, a 34-year-old Rajan would take his boat from Tharuvaikulam, a small village in Thoothukudi district of Tamil Nadu, to the nearby island of Koswari and mine for corals.

Corals are a rich source of lime and are in great demand in the limestone industry. Koswari itself is made up of calcareous frameworks of dead reef and sand, and is an attractive mine for coral-hunters. The island lies only a few kilometres away from the mainland, and makes up a small archipelago of 21 islands in the Gulf of Mannar Marine National Park in southeast India, spanning the districts of Rameswaram and Thoothukudi.

“It was around 1980 when people from our village began to mine corals from Koswari island. When I joined in around 1985, we would earn about 150 rupees from selling a tonne,” Rajan, now 50, said. “It was easy money, and we continued to break corals off the island till 2004.”

When the infamous tsunami struck, it devastated swaths of land along the southeastern coastline that the coral reefs didn’t protect. For many years the fishermen of Thiruvaikulam had been ignoring the government’s and experts’ advice to preserve the corals. But it was only in 2004 that they saw firsthand how important the reefs were. They decided to stop mining. 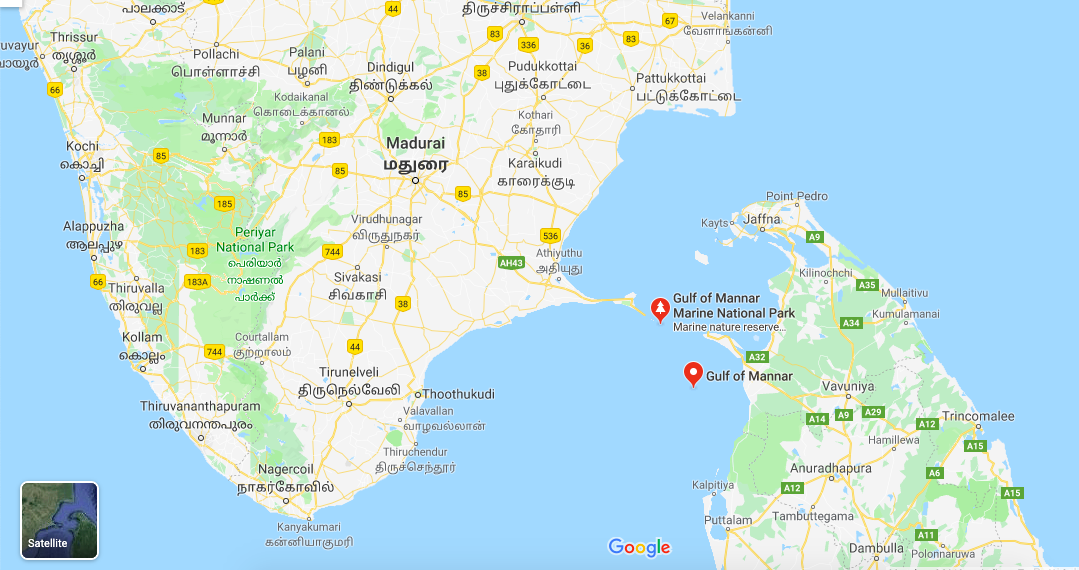 The location of the Gulf of Mannar. Image: Google Maps

By that time, however, only about a 500-m-long stretch of Koswari was above the water, against the original 1.5 km. “We witnessed the island shrinking. The soil erosion was slow in the beginning but later, it looked as if the sea was eating up the land,” Rajan said.

The Suganthi Devadason Marine Research Institute (SDMRI), Thoothukudi, has been monitoring the islands for decades, and its data supports Rajan’s account: apart from rising sea levels, coral mining has been the principal threat to these uninhabited islands.

Also read: Gulf of Mannar – Trouble in Paradise, Part I

An unpublished study SDMRI researchers conducted until 2014 found the islands’ land cover had been falling rapidly over the last five or so decades, some of them by up to 71%. Of the 21 islands in the Gulf of Mannar, Vilanguchalli and Poovarasanpatti, have already gone underwater. Two others, Koswari and Kariyachalli, could disappear by 2036 if their soil continues to erode at the current rate, the study said.

Saleem Khan, a researcher at the Centre for Climate Change and Adaptation Research in Anna University, Chennai, coauthored a study simulating the impact of sea-level rise on Tamil Nadu. According to him, the islands are at more risk [due] to soil erosion than rising seas in the short-term. “High tide and storm surge will have a more immediate impact on these tiny islands than permanent rise in sea level,” he said. 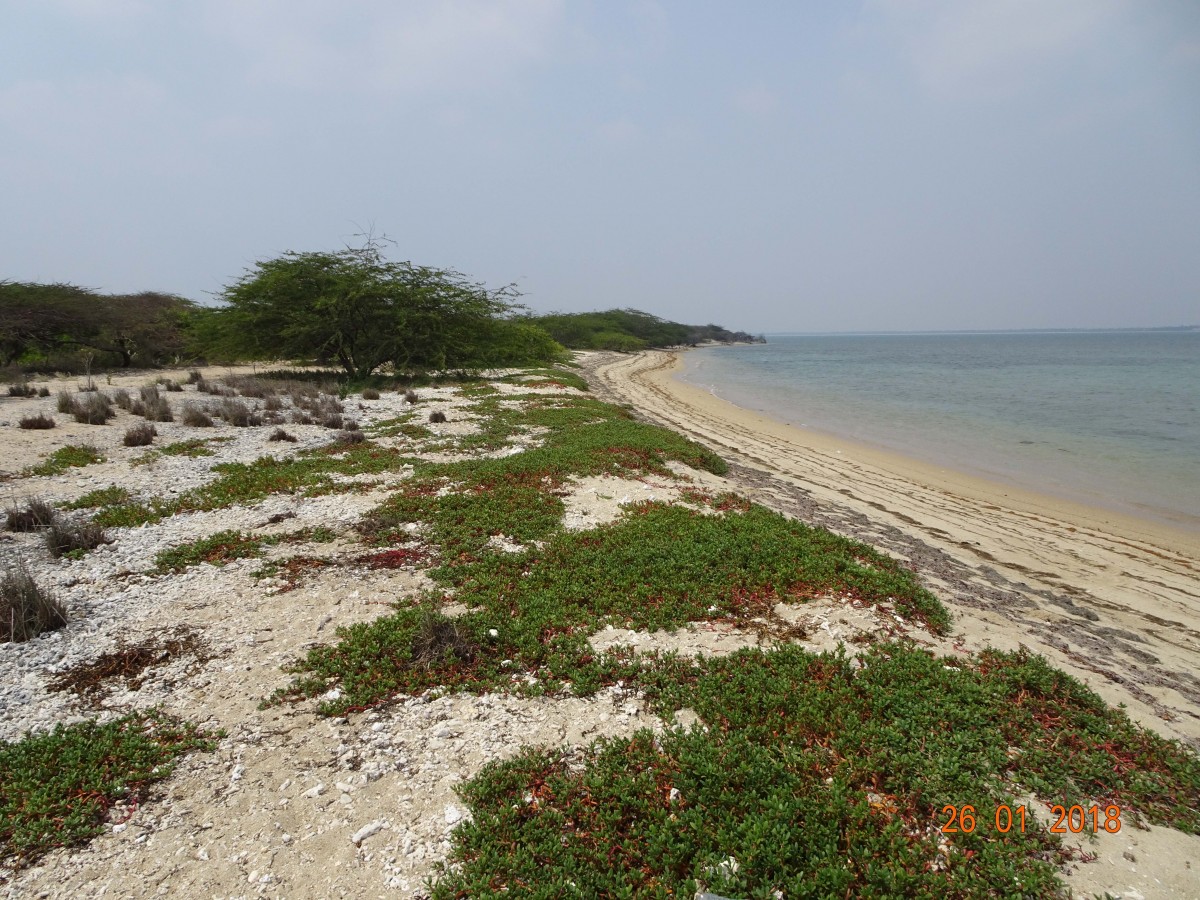 The shores of Nallathanni, another island that is sinking. Photo: SDMRI

The gulf’s islands “harbour, sustain and support the unique island ecosystems that have a rich biodiversity,” Edward Patterson, director of the SDMRI, told The Wire. It includes “coral reefs, seagrass beds, mangroves, seaweed and other associated marine life”, as well as play host to many species of birds.

Khan added that the reefs make for “excellent habitats for fish and other marine animals and are … crucial to the fisherfolk’s livelihoods.” Patterson also said that the islands “shelter fishers when the sea is rough”.

These islands, however, are low-lying – their average height is 1-3 m above sea level – which means soil erosion can be bad news for their survival. (Trawling, seine-haul fishing and push-net operations only make it worse because they “repeatedly disturb the seafloor”.)

The reefs affect the way waves strike the shore. “Because of coral mining, these islands do not have the required [amount of] sediment to soften the blow of the waves,” Patterson said. “Without that barrier, the waves hit the shore directly and aggravate soil erosion.”

So “protecting these islands will, in a way, protect the mainland from stronger forces of soil erosion,” Khan said.

The Government of Tamil Nadu has sought the assistance of the SDMRI and IIT Madras to try and keep one of the more critical islands in the gulf, named Vaan, from being submerged. 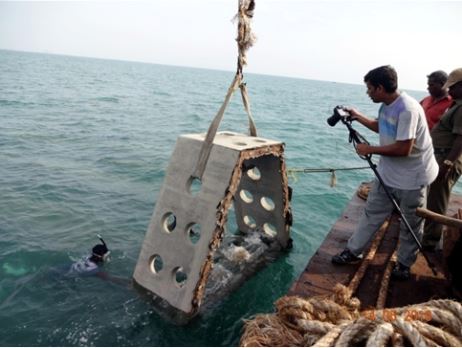 Artificial reefs created by IIT Madras being lowered into the water near Vaan island. Credit: SDMRI

Vaan, like the other islands, was also mined for corals over five or six decades, leaving its shoreline degraded and vulnerable to erosion. According to the SDMRI, the island shrunk from 16 hectares in 1986 to 2.5 hectares in 2014.

That year, the institute released a report that stated:

It was noticed that Vaan Island had been split into two (southern and northern parts) as sea water entered through a narrow channel from one side of the island to the other during high tide. On the southern side it was 2.7 hectares and on the northern side it was 3 hectares. The gap between the two parts was about 40 m in length and 15 m in width during the low tide in May 2013.

The northern spit of Vaan went under shortly after. In October 2014, only 2.5 hectares of the southern part remained above water.

Vaan was rapidly eroding, so in 2015, the state government set about restoring it – the first attempt in India to save a sinking island. IIT Madras had designed and built concrete structures to be used as artificial reefs. With the SDMRI’s knowledge of the sea, engineers deployed them along Vaan’s seaward side to break the waves and currents and to encourage the formation of fish habitats. The entire operation cost about Rs 11 crore. 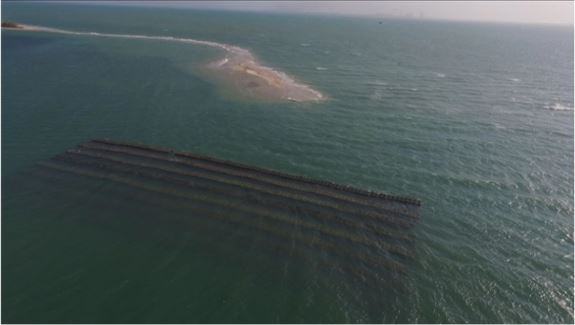 Artificial reefs deployed along the seaward side of Vaan island to soften the blow of strong waves and currents on the shore. Photo: India Science Wire

In 2017, the SDMRI released another statement: that Vaan island had grown by 2.24 hectares in the low tide and by 1.8 hectares on average between December 2015 and August 2016. The intervention was working.

Apart from an increase in landmass, researchers also reported that corals that had been transplanted onto the artificial reefs were thriving – indicating they could support a healthy marine ecosystem.

If the experiment at Vaan pans out, the government may extend these efforts to other islands in the Gulf of Mannar.

Ankita Sengupta is a Chennai-based journalist who has been writing on the environment for about six years. She specialises stories of climate change.