A Year On, Plastic Waste Returns to Uttar Pradesh Despite Ban

Their easy availability despite the ban indicates that the products are either being produced in the state or being transported from outside. 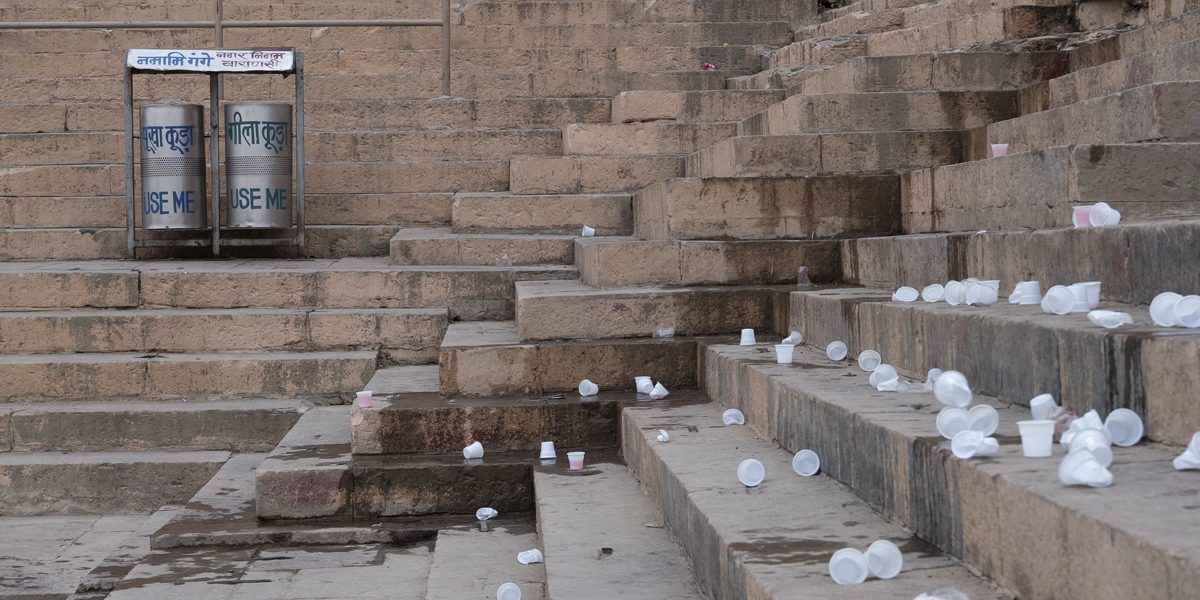 On May 21 this year, Bada Mangal, the Hindu festival to commemorate the birth of Hanuman, the monkey god, was celebrated across Uttar Pradesh. To mark the occasion, feasts for devotees were organised by prominent people and groups in cities at public places. In Lucknow alone, there were 1,400 such gatherings. By the evening, streets all over the city were strewn with plastic and thermocol cups and plates. Workers from the local municipal body, Lucknow Municipal Corporation (LMC), could clear waste from just 13 places. Ironically, there has been a state-wide plastic ban on the use, manufacture, sale and disposal of all plastic and thermocol items in Uttar Pradesh since July 2018. Flouting it invites a fine and imprisonment of varying severity, depending on the offence.

What measures has the LMC taken to enforce the ban and penalise defaulters? Ahead of Bada Mangal, the LMC simply urged organisers to “avoid the use of plastics”. There was no directive about any possible action against defaulters. The municipal corporation is headed by the Bharatiya Janata Party (BJP), which also heads the UP state government. Mongabay-India did not receive any response from municipal commissioner Indramani Tripathi or mayor and BJP leader Sanyukta Bhatia when it reached out for comments. 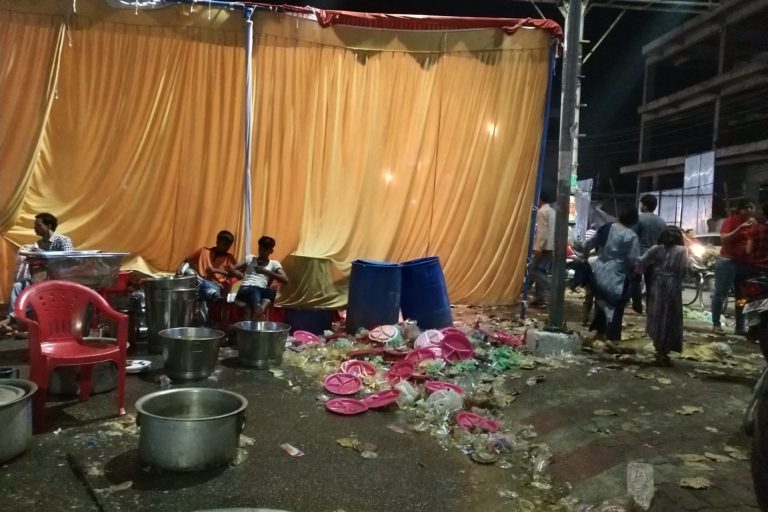 Since July 2018, Uttar Pradesh has a statewide ban on the use, manufacture, sale and disposal of all plastic and thermocol items. Photo by Kanchan Srivastava/Mongabay

“The Bada Mangal is held for four consecutive Tuesdays with same mass-scale violation of environment norms across Uttar Pradesh. Plastic disposables are openly used across the state; no one has any regard towards the environment, whether it’s the government, civic bodies, street vendors or citizens. While neighbouring Himachal Pradesh has effectively implemented the plastic ban, in UP it exists only on paper,” says Ekta Shekhar, environment activist and founder of The Climate Agenda, a non-governmental organisation (NGO) based in Varanasi, UP.

Arun Sahu, a fruit seller in Varanasi, says in defence: “Most street vendors offer plastic carry bags and customers find it convenient. If I refuse, I will lose my customers to someone else.”

Pappu Yadav, a vegetable vendor in Lucknow’s Gomtinagar area says, “The government announces a ban on plastic carry bags every now and then and urges people to carry cloth bags. People follow the directives for a few days and then demand and supply of plastics returns to the same place as before the ban.

A series of unfortunate bans

Uttar Pradesh also sought to implement similar bans way back in the year 2000, again 2016, followed by another reinforcement in 2017. Then came the state’s stringent Plastic and Other Non-Biodegradable (regulation of use and disposal) (Amendment) Act 2018, which exhibited more commitment towards climate.

The ban was rolled out in phases, with the state government directing all municipal corporations, district officials and departments concerned to enforce the ban.

On July 15, 2018, single-use carry bags less than 50 microns, glasses, cups and cutlery were prohibited. From 15 August 2018, a blanket ban on the manufacture, stocking, sale and transport of all disposable plastic and thermocol items, was rolled out. In the last phase, from October 2, 2018, disposal of all types of non-biodegradable polythene was banned with the objective of making UP a plastic-free state.

The easy availability of plastic bags and cutlery, despite an official ban from January 2016 indicates that these products are either being produced in the state or being transported from outside despite a ban on both.

According to the State Pollution Control Board’s data of 2017-18, there are 99 factories approved for plastic and multiplayer plastic production in Uttar Pradesh. Besides, 16 units were running without permission.

The registered units are permitted to manufacture only recyclable and biodegradable products. Manufacturers are also expected to put ‘recyclable’ and ‘non-recyclable’ labels on their plastic products. Manufacturing units continue to run under these circumstances. But the implementation of the rules remains weak and  the Central Pollution Control Board  (CPCB)’s report shows that no state-level monitoring committee (SLMC) has been formed yet to monitor the compliance.

Additionally, there is no data available on the amount of prohibited plastics being manufactured, exported, imported, segregated and recycled. Accurate data is crucial for effective implementation of the policy, says Shekhar of The Climate Agenda, adding that India needs these figures even more since it has stated its intention to phase out single-use plastic at the 2019 United Nations Environment Assembly (UNEA) and also banned the import of plastic waste into the country. 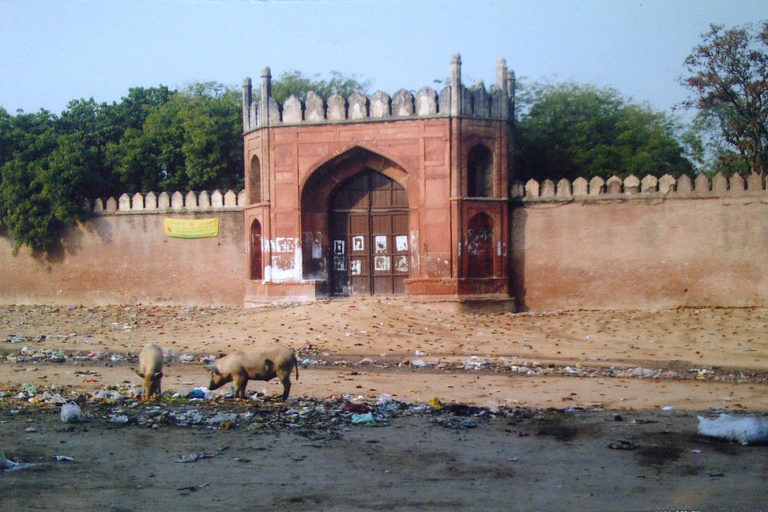 A 2013 photo of plastic waste in front of the Idgah Maidan in Agra, U.P. Despite three bans in the past four years, plastic waste still continues to plague UP’s cities. Photo by Dr Rasheed Hussain/Wikimedia Commons.

Chief environmental officer Amit Chandra, Uttar Pradesh Pollution Control Board (UPPCB), admits that there is brazen violation of plastic waste management rules. “Data for 2018-19 is being compiled and that give us a clear picture about the plastic waste management scenario in the state. Directives have been issued to the urban development department (UDD) to effectively implement the ban with the help of civic bodies,” he adds.

According to Chandra, 16 plastic production units running without registration in the state have been shut down between 2018 and 2019. Besides, UPPCB has seized 106 tons of plastic and made a collection of Rs 2.5 crore in penalty from defaulters – manufacturers and transporters violating rules – in the last one year.

Households are the largest source of plastic waste, which mainly comprises of water and soft drink bottles and packaging materials. Their segregation from solid municipal waste is a daunting task.

“The biggest concern is segregation, re-aggregation and disposal of packaging waste. In UP, only a small fragment of waste is recycled due to these challenges,” said a senior cabinet minister.

Plastics waste constitutes a significant portion of the total municipal solid waste (MSW) generated in Uttar Pradesh and other parts of India. Its consumption has gone up with the rapid rate of urbanisation and development. According to a CPCB study, the quantum of plastics and rubber in MSW has gone up from 0.6% to 9.22% between 1995 and 2005.

According to a report published by The Energy and Resources Institute, the average per capita consumption of plastic in India was about 11 kg in 2014-15; the figure is expected to touch 20 kg by 2022.

As per a report of Central Pollution Control Board, about 94% of plastic waste comprises thermoplastic, such as PET (polyethylene terephthalate) and PVC (polyvinyl chloride), which are recyclable. “The remaining non-recyclable ones, belonging to thermoset and other categories of plastics and multi-layer thermocol, pose a huge threat to the environment. Most of it ends up being solid municipal waste due to poor segregation efforts. Even rag-pickers don’t pick them up,” an environment ministry official says. 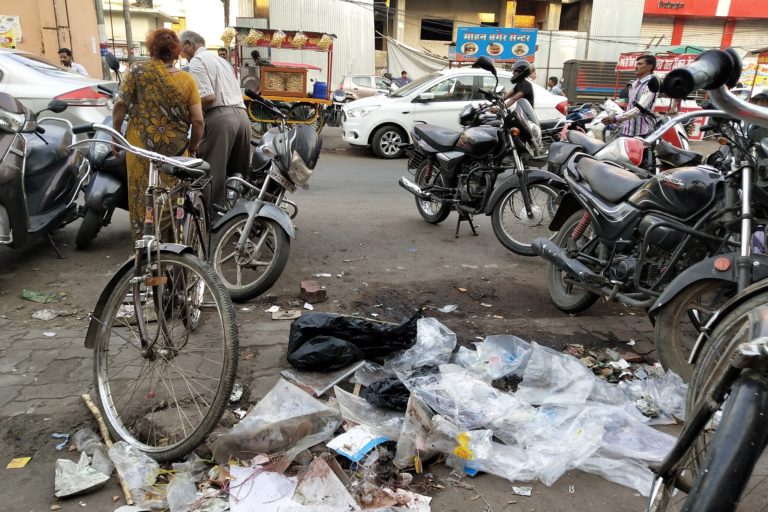 Despite a ban on plastic, poor segregation and recycling, as well as weak enforcement of the laws, has lead to the return of plastic in Uttar Pradesh. Photo by Kanchan Srivastava/Mongabay

Plastics that are non-biodegradable, remain on earth forever and damage the fertility of the soil.  In fact, only 9% of the plastic waste is recycled all over the world, over 12% incinerated and the rest ends up in landfills, ponds, rivers and oceans, estimates the United Nations Environment Programme (UNEP).

“The continuous growth in the amount of solid waste that humans produce and the very slow rate at which that waste degrades are together leading to a gradual increase in the amount litter found at rivers and sea,” says environmental activist Afroz Shah who is credited with cleaning of Versova beach in Mumbai, Maharashtra. According to the UNEP, 8 million tons of plastic waste enter the world’s oceans each year and damage caused to the ecosystem is worth $8 billion. Over 90% of plastics in the oceans come from just ten rivers including the Ganga in India, scientists have speculated.

Rakesh Jaiswal, founder of Eco-Friends, an NGO in Kanpur, UP, says, “The world is concerned about microplastics, a degenerated form of plastics which can be ingested by simple life forms and enter the food chain. And here we are – with no plans in place to deal even with basic plastics.”

On being asked about the situation, urban development secretary, UP, Anurag Yadav, says: “The SLMC was formed in October 2017. It was reconstituted in April 2019. District magistrates, municipal commissioners, and executive officers have been consistently asked to conduct enforcement drives on a sustained basis. We are also creating a taskforce of retired senior army officials to enforce the ban effectively in all municipal corporations.”

According to Yadav, show-cause notices have been issued against 208 brand-owners who failed to re-collect and dispose the plastics sold by their brand as per Extended Producer Responsibility (EPR) plan, in accordance to the Plastic Waste Management (PWM) Rules, 2016. Section nine of the Rules mandates plastic manufacturers and brand owners to work out waste collection systems as per EPR.

He adds that a plastic waste management plant, with a capacity of three metric tons, at Lucknow is in the pipeline. Quizzed about the segregation of plastics from municipal wastes, Yadav insists that a plan is in place and all civic bodies will implement it in next 3-6 months.

This article was originally published in Mongabay on July 15, 2019.