Urumin has been found to be effective against influenza strains that have developed resistance to commonly used drugs. 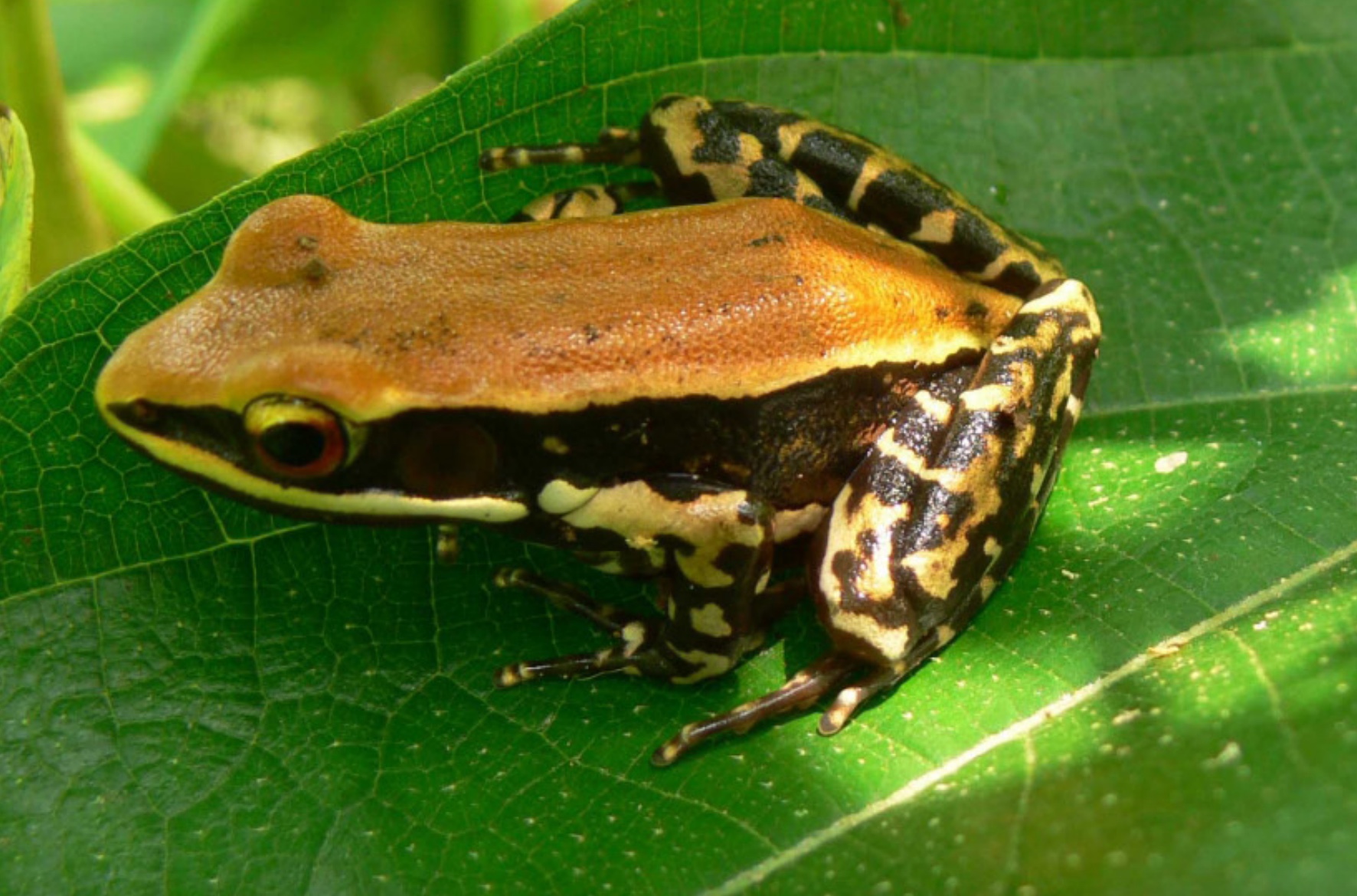 Bengaluru: A protein found on the beautifully coloured skin of a frog from the Western Ghats has the potential to be a weapon against the influenza virus, a recent study has found. The ‘weapon’ protein has been named ‘urumin’ after urumi, a sword with a flexible, whip-like blade used in Kalaripayattu, a martial arts form native to Kerala.

The frog is the widespread fungoid frog (Hydrophylax bahuvistara). It is about the size of a tennis ball and has an orange back, separated from a brown underbelly by a thin streak of golden yellow. Spots adorn the frog all over. It hops about near water bodies on the forest floor and often ventures near human habitation. When adult males of this frog get together during the breeding season, their loud singing chorus pierces the twilight for about a kilometre around.

It is from this frog that a team led by Jacob Joshy of Emory University, Atlanta, with collaborators from the Rajiv Gandhi Centre for Biotechnology (RGCB), Thiruvananthapuram, isolated urumin. The protein has been shown to destroy influenza A viruses in mice.

Influenza is an acute viral infection, highly contagious through airborne viral particles. In temperate countries, influenza strikes during winter. In the tropics, when exactly the infection occurs is unclear. The virus itself is constantly evolving. Its genetic material, the ribonucleic acid (RNA), mutates very easily. In fact, humans are currently engaged in an arms race of sorts with the virus. Every year, the WHO introduces a new influenza vaccine – different ones for the world’s northern and southern hemispheres, further testimony to the level of flux the virus is in.

The influenza virus is a tiny sphere, about 100 nanometers in diameter. Like all viruses, it comes alive only when in contact with a living being. On its surface are about 500 spike-like projections called haemagglutinins. They allow the virus to stick to host cells, for example in the respiratory tract. Once inside a host cell, the virus replicates. Other mushroom-shaped spikes, called neuraminidase, help the progeny exit the cell and infect others. The different names of various influenza strains, like H5N1 and H1N1, have to do with the types of haemagglutinin and neuraminidase.

There are three types of influenza viruses: A, B and C. Influenza A is the most severe, and responsible for all the influenza pandemics till date. The virus can cause illness in humans as well as in other species like birds and pigs. When inside non-human hosts, the virus mutates, and when it infects humans again, it can cause devastating epidemics. The H5N1 bird flu, which has been causing repeated epidemics around the world, is an infamous example. Even in 2015, there was a bird flu scare in southern Kerala and thousands of ducks had to be culled.

All living organisms produce an array of proteins to defend themselves against microbes. The first line against an invading microbe is the skin. Skin cells produce short, positively charged proteins called host defence peptides (HDPs) that are natural antibiotics. Once the HDP encounters a microbial cell, it curls up into a comfortable position and does its business. It can poke holes in the microbe and make it pop, interfere with the regular functions of the microbe or act as a lightning rod recruiting the host’s defence mechanism to fight away the intruding microbe.

Research in the 1980s showed that amphibians (frogs, toads and salamanders) secrete many unique HDPs to defend themselves against pathogens they encounter in their natural habitats. Amphibian skin is more than a slimy surface. It hosts a chemical arsenal shaped by millions of years of evolution. Further research showed that some amphibian HDPs are also active against microbes that affect humans.

Sanil George from RGCB has been studying HDPs from the frogs in his backyard, which happens to be the foothills of the Western Ghats, one of the eight hottest biodiversity hotspots in the world. In a recent review, his team mentioned that HDPs had been sampled from about 60 Asian amphibian species. The Western Ghats alone has about 160 amphibian species (and counting), of which more than 130 are endemic: found only here, nowhere else in the world. George has only touched the tip of the proverbial iceberg.

The widespread fungoid frog is one such endemic species. George’s team collected the secretions from about 15 individuals and released them back unharmed. Initial screening revealed that of the 32 HDPs from the secretion, four were effective against the H1N1 influenza A virus. Of these, a 27-amino-acid-long peptide was least toxic to human cells: urumin.

Further tests showed that urumin was able to destroy all eight strains of the H1N1 virus. However, it was not so effective against the H3 type of influenza. This led the researchers to conclude that the virus was targeting some part of the haemagglutinin H1 on the virus.

“I do not know exactly how the peptide kills the virus. We know that it binds to hemagglutinin but the events that happen next that leads to the destruction of the virus is an area of active research in my lab at this time,” Jacob, the lead author of the study, told The Wire.

When mice infected with influenza were given a dose of urumin through their nasal passages, the virus loads in the mice lungs decreased dramatically. Even with a “sub-optimal” drug delivery, the HDP was effective. “We should deliver it systemically, and currently we are figuring out how to do this efficiently,” Joshy said.

The paper states that most current influenza drugs target the neuraminidase stalks on the viral surface. This is a variable region; it can change very quickly as the virus mutates. Urumin, on the other hand, targets an area that does not change: the ‘stalk’ of the hemagglutinin. No other HDP discovered till now acts in this way.

This makes urumin effective against influenza strains that have developed resistance to commonly used drugs. This is of especial relevance because of the rise of drug-resistant influenza around the world. And given the propensity of influenza to cause pandemics, battling a drug-resistant virus without the right drug can be a nightmare.

“This is an interesting study. For the future, it would be important to determine how long after infection the peptide is efficacious,” said Raghavan Varadarajan, a molecular biophysicist at the Indian Institute of Science, Bengaluru. He was not involved in the study.

The study had picked urumin above other HDPs because it was the least toxic to human red blood cells. However, “unknown toxicities are still an issue for these peptides, although some clarification of these toxicities should be coming soon,” Robert Hancock, a professor of microbiology at the University of British Columbia, told The Wire. He added that it would be a challenge to package the HDP well enough so it isn’t damaged by enzymes in the host’s body, before acknowledging a benefit: “Cost of goods is an issue but given the lack of alternatives I see peptides as promising despite this, especially in elderly individuals.”

What remains is to decipher the exact mechanism through which urumin acts, and then to devise an effective way to deliver the drug into an infected person. From a broader perspective, delving into the mysteries of different life-forms in our forests, and conserving our rich biodiversity, has just taken on another hue.