In 2014, the Union environment ministry agreed with an expert recommendation that HEPs shouldn't be erected in paraglacial zones. 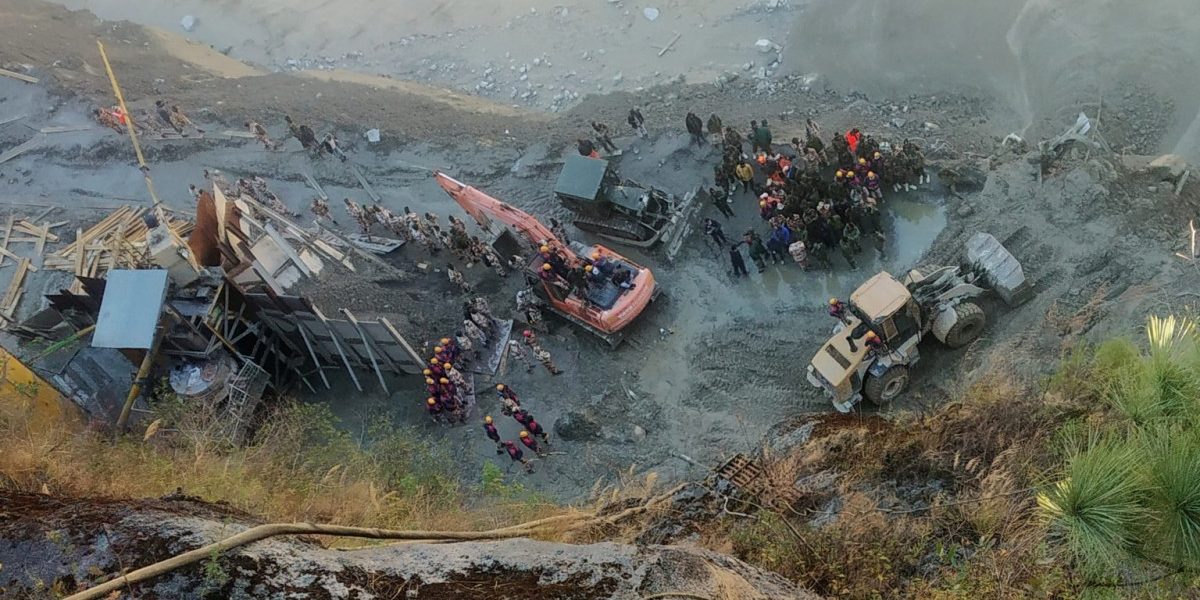 Rescue team members work near a tunnel after a part of a glacier broke away and flooded Tapovan, Uttarakhand, February 8, 2021. Photo: Reuters/Stringer

Bengaluru: A group of more than 60 experts and prominent citizens have written to Prime Minister Narendra Modi against his government’s decision to restart construction of seven hydroelectric power (HEP) projects in the Ganga-Himalaya. In 2014, a committee called Expert Body I, put together on the Supreme Court’s direction, strongly recommended against building HEPs in paraglacial zones. The Union environment ministry expressed support for this decision in an affidavit it filed with the Supreme Court that year, adding that future decisions on the matter would have to have “strong and sound” scientific backing. However, the letter states that the Modi government’s new decision to resume construction of the seven projects, six of which lie in paraglacial zones or their buffer areas, lacks any scientific support and should be rolled back.

The experts’ letter is reproduced in full below, followed by the list of 64 signatories (as on September 10, 2021, 1:55 pm). Some notable endorsers include Ramachandra Guha, Medha Patkar, Ravi Chopra and C.P. Rajendran.

Open Letter to the Prime Minister, Minister of Environment and media:

Recently the MoEF&CC has recommended restarting the construction of seven under-construction HEPs in Uttarakhand namely Tehri II (1000 MW), Tapovan Vishnugad (520 MW), Vishnugad Pipalkoti (444 MW), Singoli Bhatwari (99 MW), Phata Byung (76 MW), Madhmaheshwar (15 MW), and Kaliganga II (4.5 MW). The news came as a shock to citizens, devotees and environmentalists who have been struggling since over a decade to preserve our national river Ganga and the Himalaya. The deeply felt concern over the fate of these two pivotal ecological systems and defining symbols of Indian culture, compel us to write this letter. Not the least, as a citizen, it is also our constitutional duty ‘to protect and improve India’s natural environment’.

In the past the MoEFF&CC has strongly supported and concurred with the findings of Expert Body-I (EB I), a body formulated on the directions of the Supreme Court, which found that HEPs aggravate disasters and cause irreversible environmental damage. The MoEFF&CC stated in its affidavit (5/12/2014) ‘that it was a cause of pain, anguish and outrage that so many lives had been lost and properties damaged.’ Therefore, it said any decision on HEPs should be on ‘very strong and sound footings with scientific back up.’ In direct contradiction to this the only reasons given for restarting these projects is that ‘a substantial progress and sizeable investment’ has been made.

Six out of the seven projects (except Tehri Stage II) recommended, lie in para-glacial zones, or in its buffer. The EB-I Report had explicitly highlighted the dangers of building dams in the para-glacial zone, now understood as the region upstream of the MCT. Several scientific publications thereafter have also supported the EB-I recommendation against building dams in these areas. The destruction of the Vishnuprayag, Phata-Byung and Singoli Bhatwari HEPs in 2013 whereas the Rishiganga and Tapovan Vishnugad HEPs in February 2021 are recent examples.

The Madhmaheshwar and Kaliganga HEPs are proposed on virgin rivers in a para-glacial zone. Scientific publications in the recent years have highlighted that small para-glacial tributaries are more destructive than the main rivers. For example, the most severe destruction in 2013 was caused by Khiro Ganga, and in 2021 by Raunthi Gad and Rishiganga. Following the June 2013 disaster, Madhmaheshwar and Kaliganga rivers are virtually clogged with sediment. These sediments are likely to get mobilized during extreme hydro meterological events thus likely to impact the Singoli- Bhatwari HEP, whose barrage is located barely a few hundred meters below the confluence of Madhmaheshwar ganga with the Mandakini river as happened with the two HEPs in February 2021.

Phata-Byung and Tapovan-Vishungad can in no way be considered as 50 per cent complete. They have suffered extreme damage, and lie buried under debris even to this day. Their upstream geomorphology and catchment ecology is completely obliterated compared to what it was when the projects were designed and approved. They would require detailed fresh investigations, new DPRs and fresh clearances if they were to be considered for reconstruction. Local reports suggest that Vishnugad-Pipalkoti construction too, is under 50 percent. Tehri 2 HEP, if constructed, would immediately recycle the river water that emerges out of Tehri 1 dam without allowing for even a minimal stretch of flow in which the Ganga could revive herself. Studies by NEERI have found that Tehri 1 has already compromised the self-purifying property of Gangajal. Tehri 2 would only deteriorate it further.

Glaciers in the Himalaya are retreating faster than the global average. Hence the increased frequency of downstream flooding, glacial lake floods, and other disasters is expected. We have recently witnessed Rishi Ganga HEP being wiped out in minutes by the flooding in the Rishiganga River. Tapovan-Vishnugad and its tunnels was buried under tonnes of debris minutes later, and still remains in a deplorable condition. Labourers lost their lives in a tragic and horrific manner and many dead bodies could not even be retrieved from the tunnel. ICIMOD had already predicted in 2009 that, ‘Valuable infrastructure, such as hydropower plants, roads, bridges, and communication systems, will be increasingly at risk from climate change. Entire hydropower generation systems established on many rivers will be in jeopardy if landslides and flash floods increase, and hydropower generation will be affected if there is a decrease in the already low flows during the dry season.’

Fresh designs, costs of the damages suffered and reconstruction will make the power produced by Phata Byung and Tapovan-Vishugad prohibitively costly, especially when compared to the cheap solar power available today. The price of recovery in the valley after 2013 Kedarnath flood was estimated at Rs.6,259 crore (aprox 1.1 billion dollars). Perhaps the MoWR is already aware that the power production costs at Tapovan-Vishnugad and Singoli Bhatwari have currently escalated to Rs.23/unit and Rs.16/unit respectively.

Given all these facts, reports and studies, it would be a profound error, indeed a self-defeating exercise, to implement any more HEPs in the Himalaya and on the Ganga, whether under construction, new or proposed. The life security of our people is at stake here, and is paramount. The Himalaya are the sentinels of India and river Ganga supports almost half a billion people in its basin. The Ministry of Jal Shakti has submitted that, ‘along with the conservation of water flow, the protection of the catchment area, the forest cover and the protection of overall biodiversity is much needed because the eco system services of the Ganga-Himalayan basin is extremely significant and have a direct and indirect impact on the overall food and water security and climate conditions of the entire nation.’

We strongly emphasise that the world is in the grip of a climate change crisis. The recent IPCC report has declared a ‘Code Red’ for humanity. It has particularly cautioned that India will be among the hardest hit nations.

In our hearts and minds is also ever present, the deaths of, Baba Nagnath, Swami Sanand, and Swami Nigamanand who sacrificed their lives in prolonged fasts, to ensure the aviralta and nirmalta of Mother Ganga.

Our collective Conscience and Science both demand that the decision to restart these seven projects be reversed, keeping in mind many factors that have been ignored, in the best interests of our nation and the stated goal of the government to rejuvenate the Ganga. There are alternatives for electricity generation but there are no alternatives for our age long cultural and civilizational identity- the Ganga and the Himalayas.

The PMO has already taken a welcome and judicious decision in its meeting of 25/2/2019, that:

We conclude with the observation of the Jal Shakti ministry itself: ‘As may be seen from the views of experts and expert organizations indicated in the foregoing para, the HEPs will adversely affect the ecology of the Himalaya, leading to an irreversible loss to the Himalayan eco system and to the national river Ganga which is the nation’s identity and symbol of faith and heritage.’

We sincerely hope that you will reconsider the recent MoEF&CC recommendation to restart the construction of the seven HEPs.