According to environmentalists, the budget's thrust on development through infrastructure and megaprojects could aggravate the environmental degradation that India already faces. 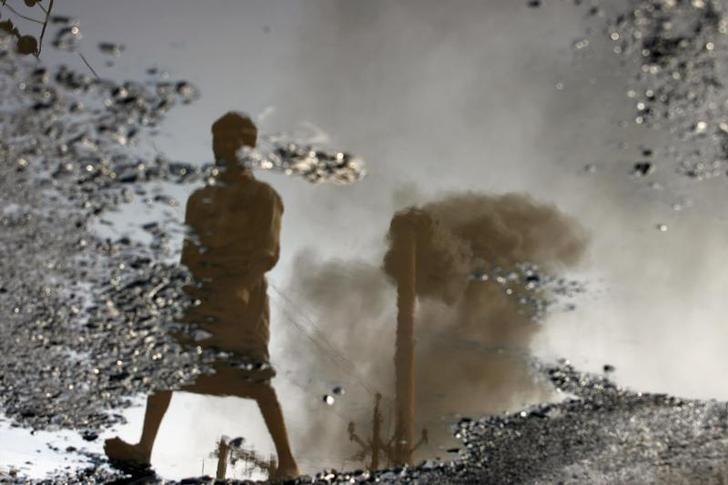 A chimney is reflected in a puddle polluted with chemicals at an industrial area of Surat November 25, 2009. Photo: Reuters/Arko Datta/Files

Kochi: Key words like ‘climate action’ and ‘energy transitions’ figured prominently in the Union Budget 2022 presented by finance minister Nirmala Sitharaman in the parliament on February 1. Despite this refreshing focus, the budget falls short in several ways in addressing these aspects, say researchers.

According to environmentalists, the budget doesn’t hold much for the environment or its protection either. The thrust on development through infrastructure and megaprojects could aggravate the environmental degradation that India already faces, they say.

The government will focus on promoting chemical-free natural farming starting with farmers’ lands close to river Ganga, said Sitharaman. The Union government has also increased allocations for the Jal Jeevan Mission from a revised estimate of Rs 45,011 crore to a budget estimate of Rs 60,000 crore for the fiscal year 2022-23. The estimated total expenditure for the Ministry of Environment, Forest and Climate Change (MoEFCC) is higher this time at Rs 3,030 crore, when compared to Rs 2,520 crore in FY22. For the Deep Ocean Mission, the government has spent Rs 150 crore in FY22, and Rs 650 crore has been allocated in this year’s budget. The National Mission for Green India, Project Tiger and funds to control pollution have also seen increases in allocations when compared to last year.

India’s climate targets – including Prime Minister Narendra Modi’s recent announcement that India will achieve net zero emissions by 2070 – have meant that immediate action would be required for a transition to clean energy. The Union Budget didn’t disappoint on that account.

Energy transition and climate action (along with productivity enhancement and investment, and sunrise opportunities) were one of the four main priorities listed in the budget. The finance minister made several climate-related announcements in her budget speech. She announced an additional allocation of Rs 19,500 crore for production-linked incentives (PLI) for manufacturing of high-efficiency solar photovoltaic modules.

This, however, is not new. R.K. Singh, power and new and renewable energy minister, had announced in November last year that the Union government will increase the funding under the PLI scheme for domestic solar cells and module manufacturing to Rs 24,000 crore from the existing Rs 4,500 crore.

As part of transitioning to a carbon neutral economy, 5-7% biomass pellets will be co-fired in thermal power plants resulting in CO2 savings of 38 million metric tons (MMT) annually, Sitharaman said in her budget speech. This would also help avoid stubble burning in agriculture fields, she added.

This is a positive move: co-firing biomass pellets with coal can result in a reduction of coal dependence and a sharp decline in pollution levels, reported Down to Earth. However, it is one that has already been recommended by the Union government’s Commission for Air Quality Management.

For an electric vehicle push, the government also plans to bring in a battery-swapping policy. Battery-swapping is exchanging a discharged electric car battery for one that is already charged – a move that can decrease the long refuelling times that is one of the major limitations of zero-emission vehicles.

“Sovereign Green Bonds” will be issued to mobilise resources for green infrastructure, and the proceeds will be deployed in public sector projects which help in reducing the carbon intensity of the economy. The budget also includes four pilot projects for coal gasification, or converting coal into chemicals that can help generate electricity. In urban areas, special mobility zones with zero fossil-fuel policy will be promoted, Sitharaman said.

Also read: Budget 2022 Shows How Quickly We Forget the Social and Welfare Net That Served Us During COVID

Furthermore, the launching of “sovereign green bonds” will also help reduce the carbon intensity of the economy and enable access to a large pool of money for the energy transition, she added.

While “jargon terms” such as “Energy Transition”, “Climate Finance” and “Inclusive Growth” were mentioned multiple times in the budget speech, the announcements appear to fall short of “promoting clean energy in an accelerated manner”, she further said.

“At a macro level, an increase in capex will boost economic growth, however, not much additional budgetary support or tax incentives have been provided to clean energy both grid and off-grid including solar rooftop, storage technologies and green hydrogen. This is despite the big expectation that support will be provided to these new technologies to improve its commercial viability,” she wrote in an email to The Wire Science.

With India’s ambitious target of 500 gigawatts (GW) of non fossil fuel energy by 2030, new technologies will require support, she said.

“The government should have provided a budget allocation and reduction of duties to allow the deployment of rooftop solar, storage, off-shore wind, green hydrogen etc. Further, [it] didn’t include any mention of support for the closure of inefficient fossil fuel plants, nor did it deal with increasing air pollution problems,” she noted.

While the Union government made very specific allocations to tackle air pollution in the last budget (it had announced Rs 2,217 crore for 42 urban centres with over one million population), there are no additional funds to specifically address the issue this year. However, several steps have been taken under this head, said the ‘Implementation of Budget’ document. The 15th Finance Commission has identified 42 urban centres and state-level monitoring programmes that are being constituted to tackle air pollution, says the document.

Allocations for climate action are not adequate, said writer and activist Nityanand Jayaraman of the Vettiver Collective. The allocation for the Climate Change Action Plan is Rs 30 crore, he pointed out.

“That is a joke for a country the size of India. It is less than the allocation for the Ministry of Environment, Forest and Climate Change’s regional offices (Rs 50 crores),” he said.

While the budget prioritised climate action as one of the four pillars and explicitly acknowledged the threat of climate risks, it clearly missed out on providing a booster shot to climate adaptation and resilience, said Abinash Mohanty, programme lead, Council on Energy, Environment and Water.

“While a renewed focus on urban planning was one of the key takeaways in the budget, there was no mention of climate-proofing these investments and infrastructure. More than 75% of Indian districts are extreme event hotspots as a result of which India has suffered an annual average loss of $87 billion.”

Infrastructure comes at a price

While improving infrastructure also includes developing dense charging infrastructure and grid-scale battery systems that will help India reach its climate targets, it also comprises large-scale projects that could have detrimental impacts on the environment. A slew of infrastructure projects have been envisioned under the PM Gati Shakti scheme. Though the finance minister claimed that the approach to developing all this infrastructure will be through clean energy, the sheer scale at which these projects will be implemented make that look uncertain.

For instance, a whopping 25,000 kilometres of national highways will be expanded this year, according to Sitharaman. For this, Rs 20,000 crore will be mobilised through innovative ways of financing to complement the public resources, said a government press release.

Additionally, the Union government will also earmark a whopping Rs 1 lakh crore this year to assist states in developing infrastructure. These will be through 50-year interest-free loans which are over and above the normal borrowing that states are eligible for, Sitharaman said. These will include funding for projects under the PM Gati Shakti scheme as well.

“The budgetary allocations for schemes and projects with significant climate changing potential and impacts on biodiversity and livelihoods, are tens of thousands of times greater than what has been allocated for climate change action, pollution control and biodiversity protection,” Jayaraman said.

“Gati Shakti alone, with its seven engines of growth (roads, railways, airports, ports, mass transport, waterways, logistics infrastructure), will be sufficient to drive the last few nails into India’s ecological coffin. These infrastructures of mega commerce will replace the infrastructures of survival of ordinary Indians and worsen social inequality and environmental degradation.”

Also read: Without Addressing Legacy Issues, Can Digitising Land Records in India Be a Game Changer?

More river-linking projects in the works

It appears that the ambitious and controversial Ken-Betwa river linking project was only a precursor to more. Draft Detailed Project Reports for five more river linking projects have been finalised, Sitharaman announced. These are the Damanganga-Pinjal, Par-Tapi- Narmada, Godavari-Krishna, Krishna-Pennar and the Pennar-Cauvery.

“Once a consensus is reached among the beneficiary states the Union government will provide support for implementation,” the finance minister said.

She further announced Rs 1,400 crore for the ambitious and controversial Ken-Betwa river linking project for FY23. The project, incidentally, has come under huge criticism from water experts, conservationists and activists (both social and environmental) for the numerous deleterious hydrological, social and environmental effects it would have in the Bundelkhand area of Uttar Pradesh and Madhya Pradesh.

“On the one hand, the Budget talks of climate action and protecting the environment. On the other, it pushes ecologically disastrous river-linking projects. Rhetoric sounds nice. But actions matter more. On that front, the Modi govt [sic] is on a destructive path.”

On the one hand, the Budget talks of climate action and protecting the environment. On the other, it pushes ecologically disastrous river-linking projects. Rhetoric sounds nice. But actions matter more. On that front, the Modi govt is on a destructive path.