Trump Aides to Meet Tuesday to Discuss Paris Climate Accord

White House advisors are considering remaining in the pact in order to shape climate policy and to facilitate the needs of US global energy companies. 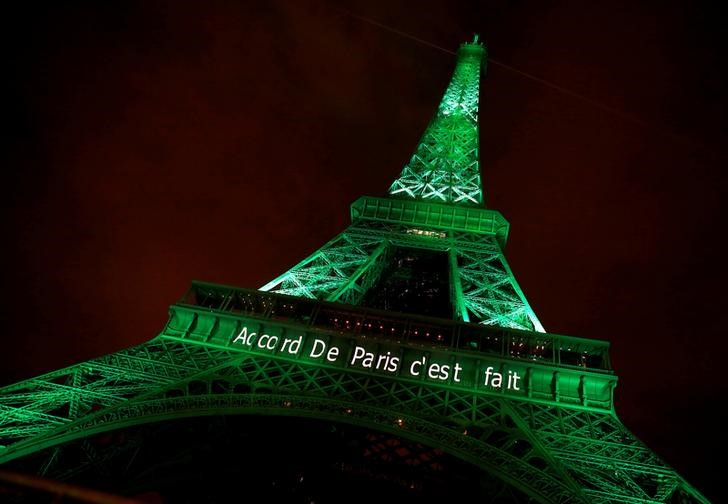 The Eiffel tower is illuminated in green with the words "Paris Agreement is Done", to celebrate the Paris UN COP21 Climate Change agreement in Paris, France, November 4, 2016. Credit: Reuters/Jacky Naegelen/Files

Washington: President Donald Trump’s top advisors will meet on Tuesday, April 18, to discuss whether to recommend that he withdraw the US from the Paris climate accord, a White House official said on Monday.

The accord, agreed upon by nearly 200 countries in Paris in 2015, aims to limit planetary warming in part by slashing carbon dioxide and other emissions from the burning of fossil fuels. As part of the deal, the US committed to reducing its emissions by between 26-28% from 2005 levels by 2025.

Trump in the past has said the US should “cancel” the deal but he has been mostly quiet on the issue since he was elected.

A White House official said Trump’s aides would “discuss the options, with the goal of providing a recommendation to the president about the path forward.”

White House officials, led by the National Economic Council, have recently been asking publicly-traded energy companies for advice on whether to stay in the agreement.

Major publicly traded coal companies such as Cloud Peak Energy Inc. and Peabody Energy Corp confirmed to Reuters that they have told White House advisors it is in their interests for the US to remain in the Paris agreement to ensure there was a global role for high-efficiency coal plants.

“By remaining in the Paris Agreement, albeit with a much different pledge on emissions, you can help shape a more rational international approach to climate policy,” Cloud Peak CEO Colin Marshall wrote in the letter dated April 6.

Perry, a former Texas governor, at his confirmation hearings in January softened a previous position that the science behind climate change was “phony.”

Last week, Pruitt, a former Oklahoma attorney general, said the US should “exit” the agreement because it was a “bad deal” for the country.

The meeting comes ahead of a summit of the Group of Seven wealthy nations in late May, which White House spokesman Sean Spicer said was the deadline for the decision.